We gave our toad a workout today by traveling about 115 miles down the very bumpy and dusty Notom-Bullfrog Road, the equally bumpy and dusty Burr Trail, and back to the campground on Route 12 also known as Scenic Byway 12.

Before turning onto the Notom-Bullfrog Road we stopped at the Behudin cabin. This one-room cabin was built in 1882 by Elijah Cutler Behunin and his family. They lived here for less than a year before relocating. Fremont River floods destroyed their irrigation system as well as their crops. The landscape and environment here can be very unforgiving. They eventually settled in Fruita. By 1896 the Behunin’s had 13 children. The sign had an 1896 photo of the Behunin family. By estimating the ages of the kids in 1896, we figured that ma and pa Behunin and five to six kids lived in this cabin. And some people think our 28 foot motorhome is too small for the two of us. 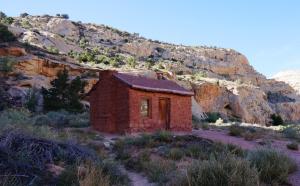 The Notom-Bullfrog Road tracked straight, sort of, down the Waterpocket Fold for 34 miles. The first 11 miles are paved.

You can see how the weather has sculpted the mountains along the Waterpocket Fold.

You can also see nearly perfect sandstone layers, like a geological Napoleon pastry. (I’m seeing a pattern here. Lots of my analogies refer to food.)

The next 23 miles of the Notom-Bullfrog Road definitely aren’t paved. We bounced and bumped through numerous gravel washes and rutted and washboarded dirt roads. Our tires kicked up plumes of powdery red dust that coated the car. We’ve been hoping for rain to wash the dust off. We’re still waiting. And the car’s still dusty.

Here’s another view of this fascinating landscape.

The Burr Trail was named after John Atlantic Burr who built it to move cattle from Boulder Mountain to Bullfrog Basin. It became a “real” road in the 1940s to support mineral exploration (coal, oil and uranium). The mines have since been abandoned and are now encompassed as part of the Grand Staircase-Escalante National Monument, which is tasked with cleaning up the mess.

When we turned onto the Burr Trail we wound up and down 6 miles of dirt and gravel switchbacks cut into the west side of the Waterpocket Fold. More often than not there were no guardrails to spoil our view (good) or to keep us from rolling down the side of the canyon (bad). Needless to say, the driver (me) kept a sharp eye on the road and a firm two-handed grip on the steering wheel.

Still there were plenty of places to pull off the road and pry my hands off the steering wheel to take a look at the scenery, which was jaw-dropping.

Thirty miles of paved road wound its way through the park until we intersected Route 12 in Boulder, UT. We passed several small primitive campsites on BLM land, in Capitol Reef NP and in Grand Staircase Escalante NM. Large RVs wouldn’t fit but we saw some small RVs in them. Just remember we’re serious when we say primitive.

We didn’t do much sightseeing in Boulder, but we did stop for a few hours to wander the Anasazi State Park Museum, which is covered in another blog post.

Between Boulder and Torrey, Route 12 winds through the beautiful Dixie National Forest. The section of the road north of Boulder (toward Torrey) wasn’t completed until 1985 so locals had to make a 200 mile loop around Boulder Mountain.

I did learn something new while reading one of the informational signs next to Highway 12 on Boulder Mountain. Aspens produce seeds but usually reproduce by root sprouts. Thus an aspen stand can be composed of genetically identical trees. This means that an entire stand of aspen may change color at the same time. 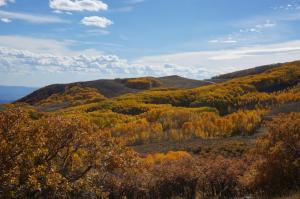 We took a peek at the Oak Creek Campground just off the highway and thought it was very nice. It can’t accommodate large RVs. The Singletree Campground right up the road is even nicer and can. Although there are no hookups, there is a dump station and potable water at Singletree. 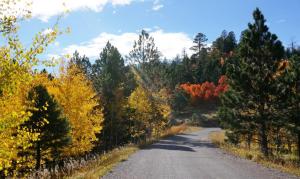 This entry was posted in Scenic Drives. Bookmark the permalink.