If God had been a child, Bryce Canyon would have been His playground. The hoodoos look as though they were sculpted out of mud by a child’s tentative hand. This hand practiced building multicolored towers, walls, windows, bridges, arches, and alcoves. Some things, like the statue on the Queen’s Garden Trail, appear to have been sculpted out of papier mache. Regardless of your religious leanings, hiking any of the trails at Bryce Canyon is a spiritual experience. At least it was for me.

We started our hike at Sunset Point, followed the Wall Street portion of the Navajo Loop, switched to the Queen’s Garden Connector Trail to Queen Victoria’s statue, wound up the Queen’s Garden Trail to Sunrise Point, and followed the Rim Trail back to Sunset Point. Total distance was a little over 3 miles, but with the heat of the sun felt like 300.

The trails were very well maintained and when the trail split, signs got you going in the right direction. If I can follow the trail signs and not get lost, then they have to be good trail signs. And this is from a person who got “lost” driving out of a church parking lot! Where our Boy Scout Troop had been meeting for years! And with a caravan of Boy Scouts following me! True story – honest.

The first few steps of the hike clued us into what was in store for us. At the bottom of the picture, you can see the Navajo Loop Trail winding down the canyon. And beyond that is a spectacular view across the canyon. Visibility is extremely good and you can see features up to 100 miles away.

It didn’t take long before we ran into a very compact set of switchbacks that led to Wall Street. At least we were going down! 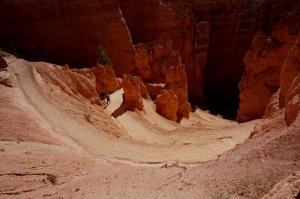 Near the end of the switchbacks, the dimly lit entrance to Wall Street loomed ahead.

We flipped a coin to see who would enter the jaws of Wall Street first and Holly lost. (I am making this up.) Note the intrepid look on the face of our heroine. I was quaking in my boots.

Holly turned and went in. She was neither gored by a Bull or mauled by a Bear. I followed her at a safe distance. 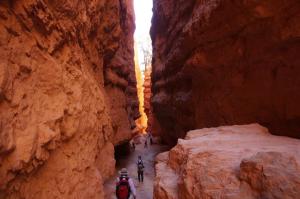 Another one of nature’s many marvels greeted us as we left Wall Street, two gigantic Douglas firs reaching for the sky. As you can see, the canyon walls are narrow and tower above the pines. How they managed to germinate, mush less grow to such heights, amazes me.

As we left the confines of the canyon, a forest of Douglas firs and other conifers spread out before us. These trees are truly majestic. 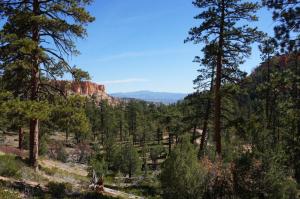 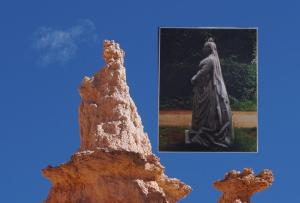 One the trek back to the canyon rim, we passed hundreds, maybe thousands of hoodoos like these.

On the one hand, as I said at the beginning, these features look as though they could have been crafted by a giant God-child’s hand. Large blobs of mud were molded layer by layer into something almost human like.

In fact, there’s a Paiute legend that Legend People once inhabited this land. They abused the land, drank all the water and ate all the food, leaving nothing for any other living creatures. The animals complained about the Legend People’s selfishness, finally getting the attention of Coyote, a powerful god. Coyote invited the Legend People to a banquet where he promised them all the food they could possibly eat. They came dressed in their finest clothes and war paint. They sat down at Coyote’s elaborate banquet table but before they could take a bite, he turned them to stone.

Whatever you may think about the legend, it should give us all food for thought. Are we the new Legend People? Are we taking care of our planet, its resources and treasures? Are we doing enough to protect our flora and fauna, even those we haven’t discovered yet? Or will we continue to ravage our planet and in the process destroy ourselves?