While Holly’s favorite hike so far was the Narrows, mine is Angel’s Landing. This hike pushed me both physically and mentally. I’ve done tough hikes before – a 6-day rim-to-rim-to-rim backpack trip across the Grand Canyon in 100 degree plus July heat and a one day 22 mile round trip from Whitney Portal (8,360 feet) to the top of Mount Whitney (at 14,464 feet it’s the tallest mountain in lower 48 states) and back. Of course I was much younger then.

What made this challenging was knowing that the trail was very narrow and, with a misstep, the only thing between me and the ground was air. Lots and lots of air. In fact, there would be 1,488 feet of air between the Angel’s Landing peak and the canyon floor.

Like most mornings at this time of year, the sky was clear and the temperature was in the 40s. We caught the shuttle at the Visitor Center and got off at the Grotto stop. Along the way we got a firsthand look at rush hour in Zion Canyon. 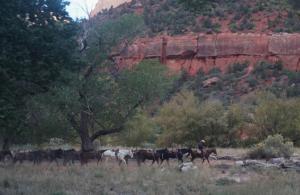 The first clue that this hike was not for the faint of heart was this warning: 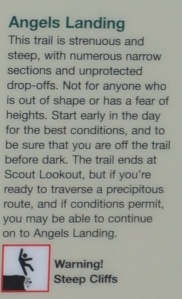 They left off a few items, like “if you’re crazy” and “if you want to be eligible for a Darwin Award”. (Google “Darwin Award” and you’ll see what I mean.)

Remaining blissfully ignorant of our peril, we continued on our merry way. The flat, tree-lined riverside trail lulled us into a false sense of serenity. 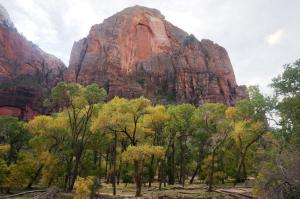 We broke into the open and there was our goal, a mere 2.5 miles as the drunk staggers and 1,488 feet above us. 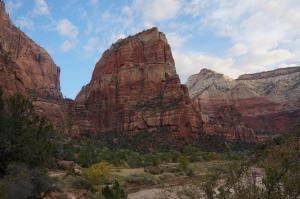 The first portion of the hike, along the West Rim Trail, was not too bad. We trended upward but not too steeply, as the following look back down the trail shows. 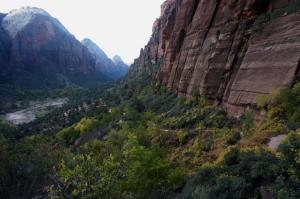 Using these definitions as a guide, we entered the steep portion of our trip. This is also where the trail must have been laid out by a less than sober trail worker. While it may look like we’ve gone a long way toward our 1,488 foot vertical goal, you’d be wrong. Looks are deceiving. Very deceiving. 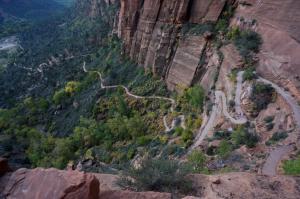 First steep part of our hike

After we got to Scout Lookout and just before we started up the really, really steep part of the trail, the Park Service provided another public service announcement. In part, this sign said, “This route is not recommended during high winds, storms or if snow or ice is present.” They forgot to add, “during periods of sanity or rational thought.”

Still feeling blissfully insane and irrational, we started up the first trail, designed for bighorn sheep. The last time I looked, I wasn’t a bighorn sheep. But I went anyway. 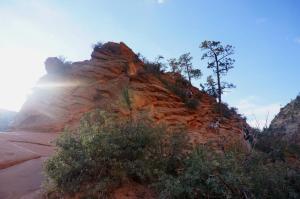 In this instance, going into the light is not recommended. Better to follow those other people to the right.

It was very nice of the Park Service to provide hand rails in the form of chains connected to steel rods anchored in the rock. It’s little things like that that keep Holly truckin’ and smilin’. 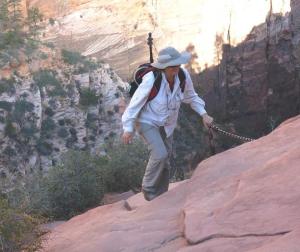 Once we got to the top of this first incline, we were presented with our next objective. At least there was a bit of a respite while we navigated the narrow saddle between the peaks. 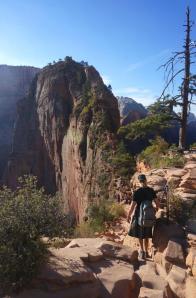 Once we passed the saddle, we got a good look at our next ascent. Looks like we’ll be tightrock walking. (Tightrock. Tightrope. Get it?) If you look closely, you can see teeny tiny people on the “trail”. 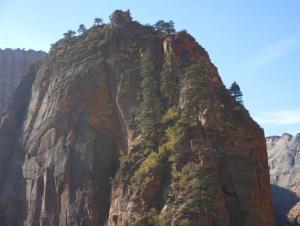 At about this point I starting thinking that I should have been wearing Depends because it looked like we were heading toward some “Aw, s**t” moments. Pardon my French.

There were quite a few times when we couldn’t see where the trail was going 50 feet ahead of us. Sometimes it looked like the trail just ended in thin air. That was a little unnerving.

There was a lot of traffic on the trail too. You had to plan ahead because the trail was seldom wide enough for two hikers to pass each other. We tried to be considerate of other hikers and to make sure we found a place to step aside so they could pass us. But not every hiker we encountered was as patient. Some were just too self-absorbed to notice that anyone else was on the trail or too self-important to be considerate. I thought I had left folks with those attitudes back home, but I guess not.

Just when we thought we were almost there, lo and behold, we found yet another narrow saddle and another ascent. This trail was full of surprises.

By this time, my legs were getting tired and I started worrying about being able to get back down. I know from experience that tired legs are more difficult to control. One thing I did not want to do was trip on this trail. 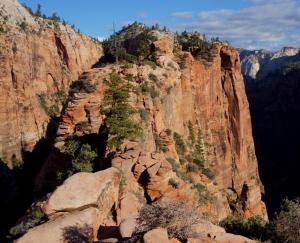 Are we there yet?

Just to give you a little perspective, you can see Holly climbing up the trail. Below her, far, far below her, is the ground. That tiny inch worm looking thing in the center of the image is a double shuttle bus, about 60 to 70 feet long. We are up there! 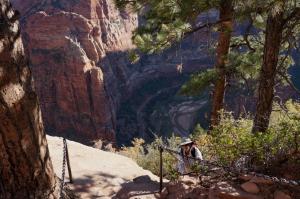 While resting, I took the opportunity to see how far we had come. It might be hard to see, but about halfway up the knife edge slope in the center of the image are two pit toilets that mark where the paved trail ends at Scott Point and the Angel’s Landing Trail begins. 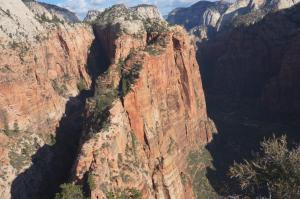 We kept going and are almost there. By this time we’d been hiking for over two hours with only short breaks to catch our breath and to drink water. 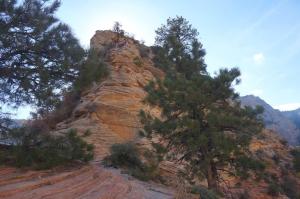 And then we are there, at the top. 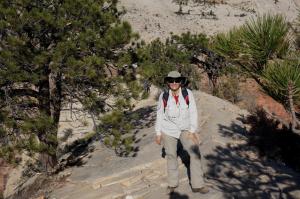 Well, Holly went to the top but NOT out to the edge, but she got close enough. She found a tree whose roots wrapped around her like arms and figured that was a good spot to rest.

I did go to the tippy top AND out to the very end of the rock, where about 30 to 40 other hikers were sitting. The views down into the canyon were awesome. 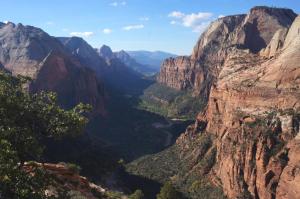 From the top looking south

Looking down to the north could cause vertigo, but I crawled close to the edge to get this image. The shuttle stop at the lower left is the Big Bend. You can also see a shuttle bus on the road in the center of the image, to the left of the peak. And speaking of peaks, when we started, that peak in the center looked very tall. And now I was staring down at it. 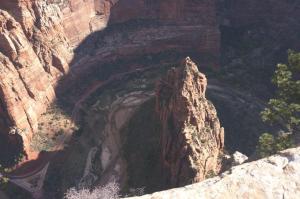 Looking down to the north

The sad part about reaching the top is not being able to stay there forever. So we headed back down. This image shows how steep the trail is and how useful the chain handrail is. There really isn’t any room for mistakes or missteps. 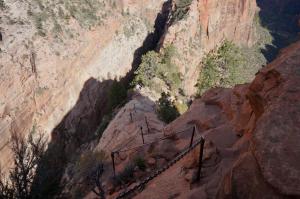 On the way down, traversing Walter’s Wiggles was much easier than on the way up. Going up we had to stop at each twist to catch our breath. 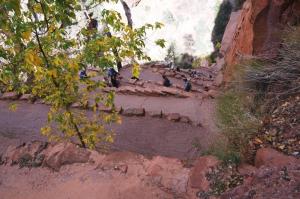 We also got a better look at the slot canyon we hiked into on our way to Angel’s Landing Trail. 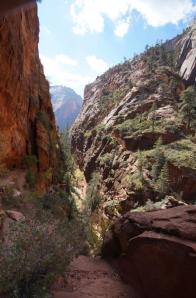 This was one of those hikes where, when you are done, your body aches but you still feel exhilarated.

Note from Holly – yes, I’m afraid of heights but not in a totally debilitating way. I don’t swoon with vertigo but my knees do try to quiver out on me and my breathing tends to get flaky (can you say hyperventilate?). I’ve done the mind over body thing to overcome this before for really cool adventure opportunities and did not want to pass this one up. I made a point of NOT looking down during the entire hike up. I knew that would be the end for me. I figured if I made it to the top, I would be forced to climb back down and that’s the way we played it. I would look OUT across the canyon and kept my eyes on the steps and rocks in front of me. I kept telling myself hundreds of people do this each day and only 6 have died since 2004. I told myself “Today is NOT the day I’m going to die!” I made it to the top, looked down… sat down… and hugged a tree. The trip back down had a lot of “Oh s**t moments as I tried to avoid seeing the drop offs in front of me, but failed. There were many steps where I could see my foot and nothing but the canyon floor past that. I clung to that chain every second it was available to cling to (casual looking, with one hand, but with a tenacious grip). I hiked this trail to prove to myself I could. I did not enjoy the hike, I endured it. I am glad I did it, just because it is a self control thing with me, but I would not do it again and I definitely don’t recommend it to others that have a fear of heights. For those that do not have a fear of heights, it is an awesome trail and not to be missed. GO EARLY! As time goes on, there are more and more and more people on the trail and the wind picks up as the sun warms the canyon with gusts that could blow you off the rocks.

This entry was posted in Hiking, Parks and tagged Angel's Landing, Zion Canyon. Bookmark the permalink.