I’ve wanted to see the Monterey Bay Aquarium for many years and we finally made it. This is a beautiful aquarium with several HUGE tanks and lots of smaller ones. I had a hard time whittling down the hundreds of pictures we took there and I am probably posting too many but here goes…

The aquarium does research and rescue work with Sea Otters that live in and around Monterey Bay. We attended a presentation on Nona, a baby sea otter separated from her mother in a storm and rehabbed at the aquarium then released. We learned a lot about the sea otters and fell in love with them.

Sea otters are so incredibly cute and playful! There are otters in a tank and you can watch the feedings twice a day OR log in to their web cam and watch them from there. They move fast but I was lucky to catch one as he swam by.

The octopus was active and awesome! They had several. This one turned bright red for some reason. One was resting in another tank and had turned to a mottled grey color that blended with the rocks it slept on.

One huge tank is a full kelp forest with the surge of waves making the kelp dance in the tank. They have a huge school of silvery fish in there that swim in formation (think of the fish in Finding Nemo that grouped together to form pictures).

The ocean tank is multi-level so you can see it from several areas. 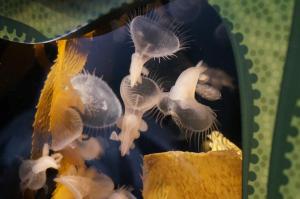 The smaller tanks get you really up close to the sea creatures for observation and great pictures. These sea slugs have “hoods” that they open then scoop closed to catch food – they look a little like Venus fly traps. 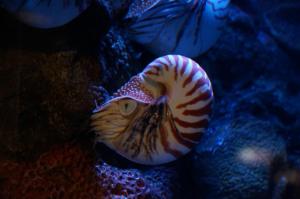 I’ve never seen so many Nautilus in a tank. They have dozens of them in there with many right up against the glass for awesome observation and photo ops.

How about live sand dollars? I never saw live ones before but here is an entire tank full. Apparently they stand up in the sand looking for food. They are all fuzzy and kind of purple.

Tide Tunnel – watch the tide wash over you without getting wet

The aquarium had huge areas that were child oriented. They still had the tanks with excellent interpretive panels for the adults but they had a lot of hands on touch tanks and exhibits to interest and educate the children.

If you go as just adults, don’t avoid what looks like kid sections. That is where you will find the giant clams and several other really great exhibits. Plus you get to watch the kids name all the characters from Finding Nemo that are grouped in one tank. 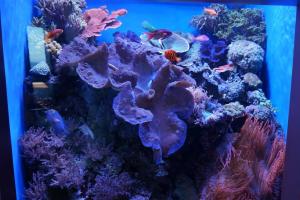 I’ve seen many whelks in my life but I’ve never seen one feeding. Who knew they could reach that far?

These whelk were at one of the touch tank areas. There were people standing by to help out and answer questions. 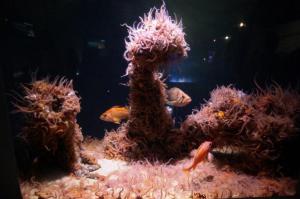 Here’s another cool tank. They don’t have one or two brittle stars in a tank, they have hundreds of them! Many of the small tanks were like this with whole colonies of the animals together instead of just one or two specimens that you have to search for.

We found the aquarium to be beautiful and informative and a recommended stop for anyone.

I was very surprised that few restaurants had views of the bay. We did eat on Cannery Row and the food was OK but not great so we didn’t do a review. We don’t eat seafood and that is the main food served and makes up most of the restaurant specialties. A review of their non-seafood would be unfair.

This entry was posted in Museums. Bookmark the permalink.