The Avenue of the Giants is a spectacular 32-mile long two lane road that runs through an old growth redwood forest. The road winds its way around redwoods growing inches from the edge of the road. Although we could have taken Route 101, which roughly parallels this road, we were glad we didn’t.

Avenue of the Giants

Much of the road is in the Humboldt Redwoods State Park. According to the park brochure, the park “harbors the largest remaining old-growth redwood forest in the world.” We spent three very enjoyable days there.

As usual for California state parks, we had no hookups. That wasn’t a problem because the weather was fine – not too warm during the day and not too cold at night.

The campground had bathrooms and pay showers, neither of which we used. We are now boondocking veterans. “We don’t need no stinkin’ showers!”

There are two other campgrounds in the park, Albee Creek and Hidden Springs, both of which were closed for the season.

The visitor center was a short walk from the campground and had quite a few interesting indoor and outdoor exhibits.

One outdoor exhibit in particular caught my attention. The tree shown below fell in December, 2006. It was “born” in 912 AD.

The tags on the tree mark events in human history that occurred during this tree’s lifetime.

Human history In the lifetime of a redwood

This tree was almost 90 years old when the Vikings landed in North America in 1000 AD. By the time it fell, this tree’s life had spanned something like 50 human generations. Pretty impressive, huh?

The visitor center had the usual gift shop that sold T-shirts and sweatshirts, souvenirs, books, DVDs, and trail maps.

The museum was divided into several sections. One covered the history of the creation of the park.

Part of that history was made by a man named Charles Kellogg. He took a 22 foot section of an 11 foot diameter redwood tree and created the Travel-Log. 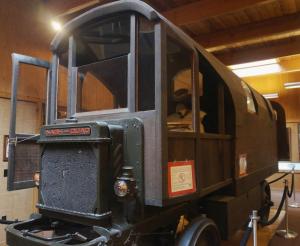 The large stuffed bear in the driver’s seat is a cute touch. The Travel-Log was basically a homemade motorhome with a bed, chest of drawers, wash basin, and cooking area.

Using his Travel-Log, he began his crusade to save the redwoods in October, 1917. While he was at it, he also sold War Bonds. (The U.S. had recently entered World War I.)

Charles Kellogg had another talent – the ability to reproduce bird songs. There was a recording of him singing bird songs and I have to say it was very impressive. Apparently his records were best sellers back then.

Another section of the visitor center covered the massive 1964 flooding of the Eel River that devastated the area, wiping out several small communities. There were binders with copies of old newspapers that covered the event. Being a news junky, I had to flip through the binder. Photos of the devastation were astounding. We also saw poles along the Avenue of the Giants that showed high water marks from the flood. Some are 25 to 30 feet above the road, which is at least 10 feet above the river. I did some research and the flooding stretched from California’s Central Valley to the North Coast and up the coast of Oregon.

The third part of the visitor center covered the natural history of the area. The more I learned about these trees the more amazing they became.

Most of the trails were level and about 4 to 6 feet wide. For the most part, elevation changes were imperceptible.

The South Fork of the Eel River, which the Avenue of the Giants followed, was a short hike from the campground.

South Fork of the Eel River

At this time of year, the river is fairly wide but shallow and slow flowing.

That’s not always the case, especially in the winter when the rains come.

The trail to the river also intersected the Gould Grove Nature Trail (0.62 miles). I walked in awe among these forest giants. 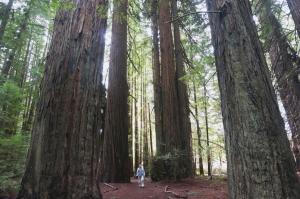 The thick forest and needle-covered floor dampened sound. Everything seemed quieter and subdued. Sunlight filtered through the canopy. The air was damp and cool. I felt as though I was in nature’s cathedral. A very serene place.

The Founder’s Grove Nature Trail was 0.53 miles long and took us to the Founder’s Tree which topped out at 346 feet high and 40 feet in circumference. Holly just had an urge to hug it.

Tree Hugger Holly – can’t quite reach all the way around this one!

It’s almost impossible to capture the enormity of these trees, but I tried. 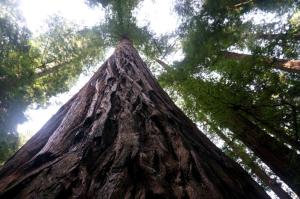 Looking up a Redwood’s trunk

The longest trail we hiked, at 2.4 miles, was the Drury-Chaney Trail. I thought it was also the best. In addition to the redwoods, the ground was covered in redwood sorrel (three-leaf clover-like plants) and large ferns. While walking on this trail in the late afternoon light, I felt as though I was in Jurassic Park. I could have been too because these trees’ ancestors lived with the dinosaurs.

This was a fascinating and awe-inspiring place. Go there if you can.

Note from Holly – we watched a 45 minute National Geographic video at the visitor center that was quite good. One section showed how they photographed one of the giant redwoods by stringing up a camera and lowering it down to the ground. The photo was a five page centerfold fold out in one of their magazines and can be found here http://ngm.nationalgeographic.com/redwoods/gatefold-image