We said goodbye to Carl G. Washburn State Park on a cool, rainy Wednesday morning and sloshed up the road toward Newport, Oregon.

Despite the rain, we still managed to catch glimpses of the magnificent coastline and forested hillsides just off the coast. Beautiful, beautiful country.

We got to South Beach State Park in a pouring rain. It’s a huge campground and we circled the open loops two or three times searching for a site that wasn’t under water. We found one we liked in Loop B (B-19). I got pretty drenched hooking up our water and electric and was very glad when I could duck inside and take my rain suit off.

We didn’t leave the rig until the next day. As you can see from the following photo, most of the campground drains pretty well but some campsites still had decent size pools. Maybe it’s a good thing we arrived in the rain. We knew our site would remain high and dry.

Our campsite at South Beach SP

The park has a hospitality center that’s open from 8am to 8pm every day and staffed by the camp hosts. There are a lot of camp hosts – more than a dozen. Like I said in the beginning, this is a huge campground. The staff were very friendly and helpful.

We checked out the hospitality center then wandered a quarter mile down a level, paved trail to the beach. They have a nice overlook tucked into the first dune that is handicap accessible and an access point to cross that dune and stroll along the long, sandy beach.

It drizzled on us during the walk but we made it inside just before the real rain came and the wind started picking up. By sunset the wind was howling and rocking the rig as though it were being shaken by a giant hand. The rain came sideways, beating against the windows. This is where camping in an RV sure beats a tent. Just so you don’t think I’m a total RV snob, I have tent camped in weather worse than this. Keep the wind, replace the rain with snow and drop the temperature about 40 degrees. I prefer the RV.

The next day the sun came out and we had beautiful blue skies. We took a hike along the Cooper Ridge Nature Trail which circles the campground. We then caught the South Jetty Trail toward Newport, returning along the beach until we connected with the interpretive boardwalk trail which took us back to camp.

The Cooper Ridge Trail took us through a really cool natural tunnel. We knew it was okay to keep going because we saw the light at the end of the tunnel. I’m allowed at least one groaner, right?

The jetty was built more than 130 years ago by the Corps of Engineers. Since then sand pushed north and south along the coast has piled up against the jetties. The shoreline south of the jetty extends out about 1/4 mile farther into the ocean than it did in 1880.

The park has interpretive signs showing how forests now grow on land that used to be underwater. First, pioneer plants like grasses grab hold in the sand behind the dunes. Over time they stabilize and fertilize the soil, allowing taller plants like shrubs to grow. Finally, these shrubs give way to scrub trees which in turn give way to “real” trees and – voila – you have a forest.

Our first peek across the entrance to Yaquina Bay was pretty spectacular. Several California Seal Lions were sunning themselves on the buoy. They barked whenever a fishing boat passed by and I think they were asking for free samples. It didn’t look like they got any. You can see Yaquina Bay Lighthouse on the hill across the bay. 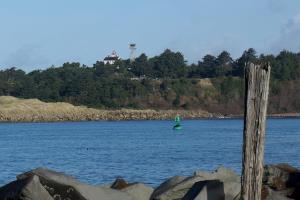 While admiring the scenery, we watched three Coast Guard training vessels pass along the jetty. We knew they were training vessels because as the sailed along they did nautical wheelies – the pilot would surge forward at full throttle, then suddenly ram the throttle into full reverse, almost pulling the stern under the water.

The pelican pod (AKA group of pelicans – I looked it up) in the lower right corner were emphatically uninterested in the comings and goings along the jetty. Pretty much not interested in each other either.

The fun for the Coast Guard trainees really got going after they passed the jetty. They sailed south a short distance then started surfing the waves. We watched them for about half an hour. I wondered how many of the trainees lost their lunch. Hope they missed their instructor. 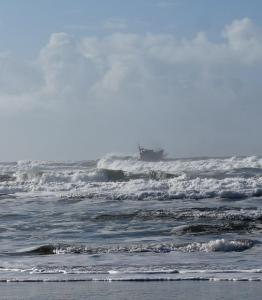 This is the tallest light house on the Oregon coast at 93 feet tall. They offer tours of the lighthouse where you get to climb to the top and gaze out on the world. Unfortunately the lighthouse is still undergoing renovations and it was completely under wraps. Being the (retired) enginerd that I am, I thought it looked like a North Korean water-propelled rocket.

After all, the surf here is pretty big and could give this “rocket” quite a boost.

What’s interesting is that the surf appears to be much rougher to the south than to the north.

We walked down to the beach area and saw some harbor seals bobbing in the water just offshore.

The Yaquina Head Lighthouse was not a random stop on our trek up the coast. A while back, Holly had been on a government volunteer website and discovered that there were some interpretive host positions available at Yaquina Head in January 2015. I wanted to see what I was getting into before I signed up for anything so we made a point of stopping to check it out. We chatted with one of the interpretive hosts for a few minutes and he really liked what he was doing. We also liked what we saw there so when we got back to the rig, Holly downloaded the application, filled it out, and submitted it before heading east for the holidays. We heard back a few days later that the position had already been filled but the reviewer seemed impressed with our qualifications. I suspect we’ll be camp hosting or interpretive hosting before too long.

For those that are unfamiliar, camp and interpretive hosts volunteer to work at a park part time in exchange for a free campsite. It’s a win-win deal and many retirees spend years doing some type of hosting in parks all over the country.

Unlike many lighthouses, Yaquina Bay Lighthouse integrated the keeper’s house and the light.

Still, you’d be hard pressed to beat the views. The photo below shows the view from the middle window on the second floor.

If you take a walk around the grounds, you get terrific views of the Yaquina Bay Bridge and the jetty.

The Works Progress Administration began construction of the Yaquina Bay Bridge in 1934. When the bridge opened to traffic in 1936, it marked the completion of the Oregon coastal highway. 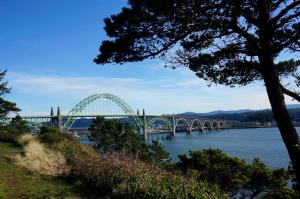 It would be hard to imagine a sweeter place to sit in a chair and watch the world go by.

We ate at Lee’s Wok restaurant which is located right on Hwy 101 (http://leeswokor.com/). We were hesitant to do so since the last three or four times we had Chinese it was not good at all. But we like (good) Chinese food and this restaurant had good reviews on Google Maps so we gave it a go. Are we ever glad we did! The building doesn’t look like much from the outside and the parking lot looks like it is part of the hotel next door, but it is quite nice inside. We had excellent service and excellent food. The portions are HUGE! We each ordered a house special and shared the two platters. Our meals came with a choice of hot and sour or egg blossom soup which were both good. We had Lee’s Wok style sizzling filet mignon and the ginger chicken. Both were excellent! We ate as much as we could then wound up taking three large carry out boxes home. Dinner and tip came to $27.00 (they have a full bar but we stuck with water and the really nice big pot of complimentary hot tea). I’m not sure where you would park an RV near here since it is right on the highway but it is worth giving it a go. We will definitely eat here again if we return to Newport.