There are two campgrounds – East and West – with a total of 165 sites. The West campground has an extension with large pull-through sites, 50amp electric, community areas, and firepits.

We opted to stay in the East campground because it was a little quieter. Site 10 is primo, with a wonderful view of the lake. But you need a loooong power cord. Some sites were more than 50′ away from their power source.

The only dump station was in the West campground.

Our camp host offered free coffee and cocoa, paid for out of his own pocket. He was extremely friendly and helpful. Did I mention he had free coffee?

Kids on bikes abounded. One kid in particular, decided to spin a cocoon, or is that a chrysalis?, and read the Harry Potter series on her Kindle Paperwhite. Guess who that was? 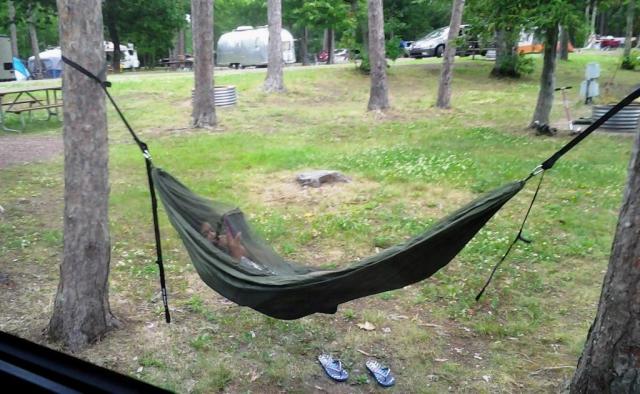 The park’s beach along Lake Superior provided a good spot to hunt for and collect rocks. Yes, you are allowed to collect rocks, but no more than 100 pounds. Then you need a license.

Their are trails that lead straight into Copper Harbor, but we didn’t use them.

The campground staff could not have been more helpful. The let us stash our rig at their workshop for the time we were on Isle Royale – no charge.

The beautifully restored Fort Wilkins was originally built during the copper rush in the 1840s, but it turned out it wasn’t really needed. The post was sited on narrow strip of land between Copper Harbor and Lake Fanny Hooe, and designed to house two companies and their families (about 150 people).

Most of the restored buildings are open and contain informative displays and exhibits.

Back in the mid-1800s there was there was no indoor plumbing, electricity, modern transportation, shopping malls, modern medicine, phones, email, or other conveniences.

Life was tough for the men and women who lived here. But who did live here?

An 1870 census showed that some of the men who served here came from the United States, Ireland, England, Denmark, and Prussia. Two-thirds of the enlisted men had been soldiers, laborers, or farmers. The remainder represented over 50 trades – barber, carpenter, druggist, machinist, printer, gardener, tailor, teacher, roofer, waiter.

I’m sure I left out a few steps like carrying water from the lake, sweating, starting a fire, sweating, boiling water, sweating, etc. You get the idea.

Enlisted men spent a large part of their day on fatigue duty. I think that means their dog tired when they’re done. While definitely true, that’s not what fatigue duty really is. It’s camp chores, lots and lots of camp chores. Enlisted men were assigned as blacksmiths, carpenters, cooks, bakers, farmers, cattlemen, even if unskilled in those jobs.

One very important chore was baking hundreds of loaves of daily bread. 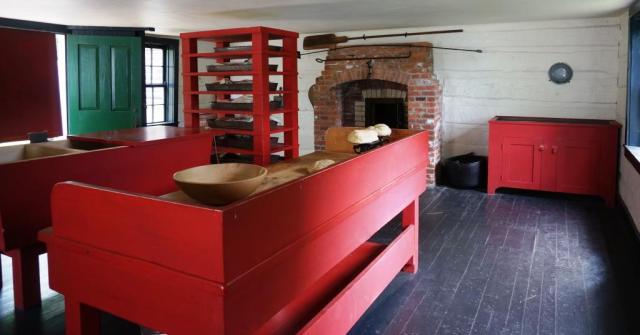 Feeding the soldiers more than bread was also important. The men ate beef hash, pork and beans, soups, stews, and roasts. Rice pudding, pancakes and molasses, boiled rice with syrup were also common. The typical breakfast included coffee, bread, meat, hominy or potatoes and gravy. A midday meal consisted of fish or meat with bread and potatoes. Supper, a lighter meal than it is today, offered coffee, bread, gravy and cold meat. 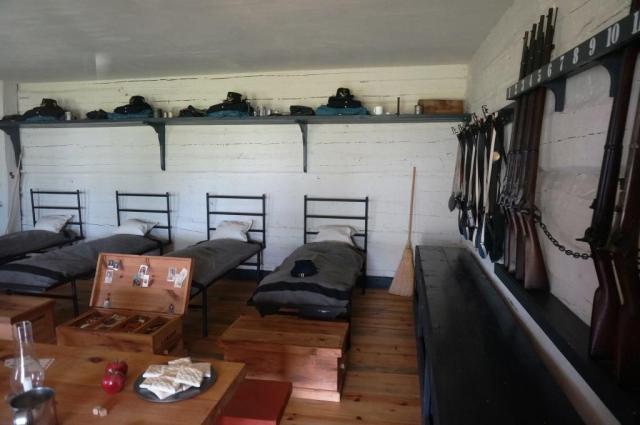 The orderly room was the company office and provided quarters for single non-commissioned officers.

Officers’ quarters were selected by rank. Any furnishings exceeding 700 pounds (600 for lieutenants) were shipped at personal expense. Officers’ wives could buy fruits, vegetables, meats, wines, and other luxuries from post sutler. Local game, fish, and berries supplemented the officers’ diets.

Because illness was endemic, one post surgeon wasn’t enough. So the Army contracted with civilian doctors to staff hospitals. The post surgeon supervised the hospital, provided medical treatment, furnished pension certificates, and made weather observations (say what?).

During the winter of 1844-45 people at Fort Wilkins were struck down with a mysterious illness – nausea, diarrhea, “pricking, tearing, lancination [stabbing] pains in the abdomen.”  Dr. Isaacs, the post surgeon, practiced “heroic” medicine, which was popular from 1780 to 1850, and involved treatments that produced strong reactions like vomiting, bleeding, heavy sweating, or constipation. He also used drugs such as arsenic, mercury, opium., quinine, and strychnine to produce the desired reactions. From this list it appears that the “desired reaction” was death!

The powder magazine was built from local stone to protect munitions from dampness. If an explosion occurred, the concave ceiling would direct the blast upward, preventing the walls from blowing outward. Openings in walls provided ventilation.

Soldiers had guard duty twice a week. They patrolled the main gate, guarded prisoners, and watched for fires. A guard detail consisted of five soldiers who worked a 24-hour shift divided into “reliefs” – two hours on and four hours off.

One guard was Frank D. Pratt, a 22 year old Civil War veteran who, before the war, had been a bookkeeper in Hartford Connecticut. Except good old Frank got drunk while on duty and was sentenced to 45 days in the guardhouse. I assume that means no guard duty for Frank.

To while away his time, he carved “Frank D. Pratt The Jail Bird” into the cell door. That happens to be the only remaining part of original guardhouse. 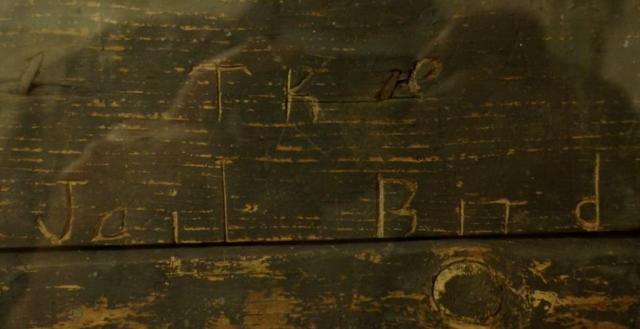 This entry was posted in Campgrounds, History, Parks. Bookmark the permalink.