The Soudan Mine is the oldest and deepest iron ore mine in Minnesota and was operated by United States Steel until 1962. It was donated to the state to be preserved as a state park.

To get into the mine you have to ride in a cage, which is an appropriate term because you do feel as though you are trapped in a cage.

The rise and fall of the cage and skip was controlled by the hoist room. A very study cable – at least I hoped it was sturdy – wrapped around a grooved 12-foot diameter, 10-foot wide drum. 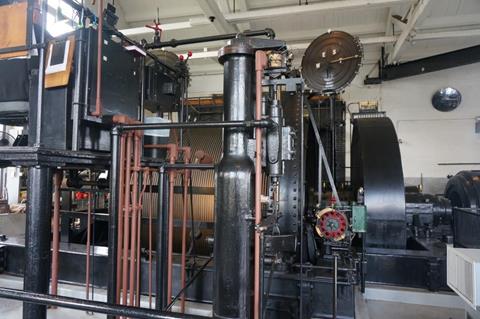 The cable or hoist rope threaded across support pulleys and around a sheave that looks like a bicycle wheel without the tire. 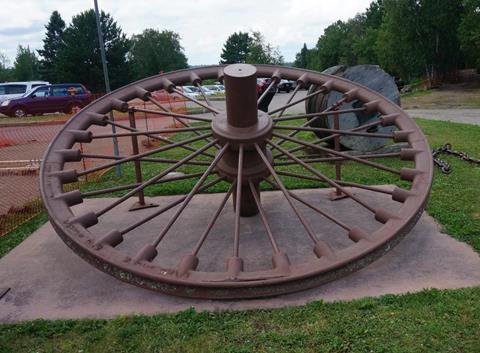 The sheave is near the top of the headframe – you can make out the rounded tops of the two sheaves in the photo below. 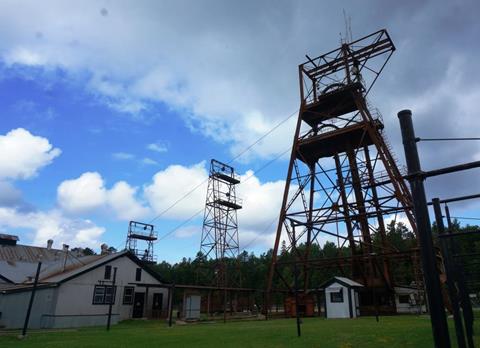 Before the tour we watched a short movie about the mine. Our guide gave us a safety talk and took us to get “geared” up.

The hoist controlled two sets of cages and skips – when one pair went down the other pair came up. This is where we waited for our turn to descend into the mine. 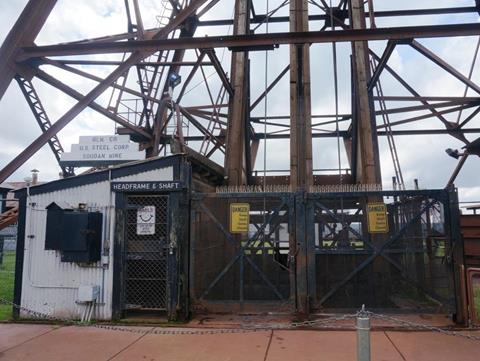 We had to crowd into the cage. The descent was not that much fun – nothing like an elevator. And there wasn’t any elevator music. The ride was noisy, bouncy, squeaky, rumbly, and pretty fast.

The cage stopped at Level 27 which was 2,341 feet below the surface and 689 feet below sea level. Hope the mine don’t spring a leak!

At least the drift was well lit. I don’t know if it was as well lit when the mine was in operation.

Our guide led us to a spiral staircase, which was definitely not there when the mine was operational. We climbed up the stairs and were deposited in a stope, which is where the iron is actually mined. The mining process seems simple – drill hole in wall, insert explosives, blow up wall, load rock into skips, hoist to surface, repeat ad infinitum. Oh, and try not to get hurt.

After the skip was hoisted up to the headframe, the contents were dumped into a Larry Car. (I’m not sure why, but when I hear this term Three Stooges pop into my mind. You know, Larry, Moe, and Curly?)

Anyway, the Larry Car followed a special railroad to a crusher house where the ore was dumped into a “pocket”. The pocket guided large chunks of ore into crushers where they were broken into seven inch pieces. From there the crushed ore was dropped onto a conveyor belt that led to a headhouse. In the headhouse the ore fell through a series of chutes into ore carrying railroad cars where it was shipped to a steel mill for processing.

This entry was posted in History. Bookmark the permalink.