Our third and final boat tour was more do-it-yourself. It is their North Canoe program and we loved it! Two Rangers come out in full character dressed as Voyageurs and “recruited” us to try out for a spot on a Voyageur crew. We were asked about our ability to cook, sing, count money and paddle. Good strong muscles were a definite plus but they didn’t reject us wimpy people. We were offered proper attire which we of course accepted. John exhibited a good head for numbers so he was chosen as the money person (easy job as we were just starting out and had no money). This added duty did not reduce the other work required. EVERYBODY hauled and paddled on a voyageur crew. 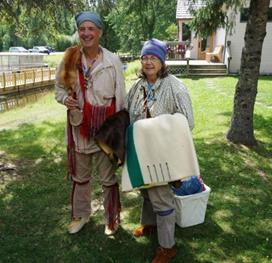 Once the crew was ready we were issued paddles (and not so period life vests) and were organized by size/weight to balance the canoe. Once loaded, we were taught how to paddle in sync (the lesson didn’t seem to stick for most of our crew) then we paddled around the sheltered boat basin singing and learning what it was like being a Voyageur.

We learned that our job would basically be to haul hundreds of pounds of gear, load it into our large canoe and paddle. A normal day of travel would be: up before dawn, eat, paddle paddle, eat, paddle paddle paddle, eat, paddle paddle, stop after dark, sleep (maybe under the canoe), repeat… for days, weeks, months. Some of that eating was while you were paddling. You normally got a ten minute rest break each hour but the other 50 minutes was continuous paddling. Mixed in with all that paddling would be a little hunting, some cooking, lots of singing and some smoking and drinking. The general theme is work hard, play hard.

Our main cold food would be pemmican and our hot food would be “rubaboo” which is a stew… Made primarily from pemmican and flour and whatever critters we could catch to go in it. Those cute little ducklings swimming in the boat basin with us? “Ahhh, zee duckling, so plump, so tender, we weel catch eet and put eet in zee rubaboo. Yes? Mmmm, very good “. 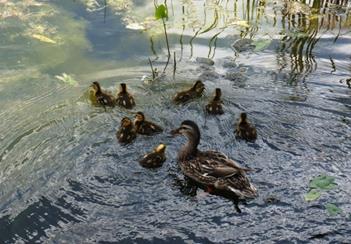 We had a blast paddling around, laughing and singing so naturally we were all willing to sign on to the crew after we landed back on shore. We all promised we would be devoted to “the company” and give our lives to protect the company goods and thus, we were hired. Then John, being the smart one, “Ahh, he knows hees letters,” was given the contract to read so we could make our mark. Unfortunately, the letter stated that the fur trade was no longer profitable and we were all fired.

Hired and fired in one day. What’s an out of work voyageur to do? He does not like city life. He does not want to leave his lakes and his woods… Hmmm. Woods. Trees. Lumber… Ahhh. Perhaps all is not lost. The happy, hard working Voyageur life in the north woods must change but the men will stay and adapt and work hard at a new task while they sing and smoke and drink and make rubaboo!

This entry was posted in History, National Park, Nature Notes and tagged Minnesota. Bookmark the permalink.