I hate shopping. I hate malls. I had NO interest in hitting Mall of America… but it was one of those “you HAVE to” locations and we were passing it just about every day. So to appease those that felt we would be missing out, we went. We had already toured two museums that day so it was a quick run over to the mall to do a quick walk around and grab dinner. It was a Sunday and the mall closed earlier than we expected so we had just a bit over an hour to spend there. That meant no sit down restaurants so we were stuck with food court food. Chloe was totally good with that. John and I, not so much. 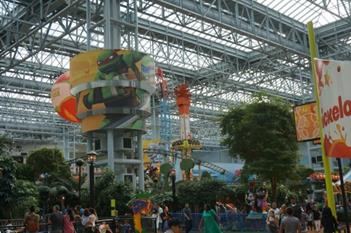 Chloe would have loved to play on the Nickelodeon rides and zip lines in the amusement park in the center of the mall and really, really wanted to go into the aquarium there (she ALWAYS wants to hit any animal attractions) but she knew that wasn’t going to happen before we went so our breeze through was fairly smooth.

We walked, we ate, we looked, we snapped pics, we almost made it out in record time then we got hung up at the Lego Store… Yep, there was ONE store that we got sucked into and it was Lego. They have really cool giant Lego sculptures and huge pixel type pictures made out of Lego Blocks. You can buy individual bricks in a rainbow of colors as well as put together your own Lego figures by selecting bodies, heads, arms, legs, accessories. It was pretty cool and who doesn’t like Lego? 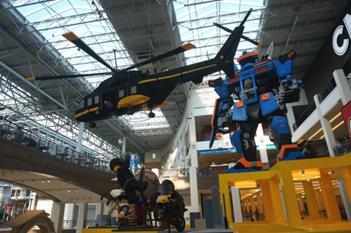 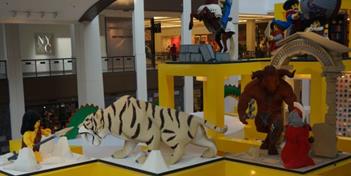 When we returned to Maryland and said, OK, we went to Mall of America like you asked. What did they answer? Oh, I looked it up. It isn’t the biggest one anymore, that’s at blah blah. Well, for super shoppers, there is plenty to see and do at MOA. For those that feel the need to only go to the biggest and best, you need to figure out where blah blah is because I wasn’t even interested enough to file it away in my brain.

This entry was posted in Miscellaneous and tagged Minnesota. Bookmark the permalink.