Lincoln’s New Salem, an Illinois State Historic Site puts a different spin on Abraham Lincoln’s life. It’s here where you can see him as a human being, not much different than other people living in New Salem, and indeed in the rest of the country. New Salem was where Lincoln “grew up.” He was 22 years old when he moved here, a young adult trying to find his way in life. He left six years later with a firm direction, although at that point his rise to the presidency was wasn’t even a germ of an idea.

New Salem came into being in 1829 when James Rutledge and John Cameron built a dam and combination sawmill and gristmill on the Sagamon River and laid out the town. 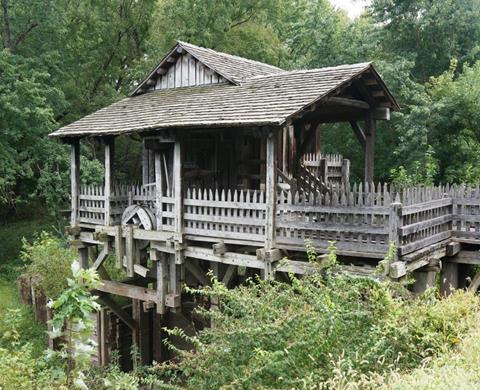 They sold lots to merchants and tradesmen who hoped growing boat traffic on the Sagamon would make New Salem a center of commerce. Local farmers could have their grain ground at the mill, exchange their produce for other goods at local stores, and hire village artisans like the blacksmith and cooper.

In early 1831 Lincoln signed on with Denton Offutt to build a flatboat and float a load of farm produce and hogs down to New Orleans. They were floating their way down the Sagamon when the flatboat got hung up on the milldam. They successfully dislodged the boat and completed their trip. On his return Lincoln settled in New Salem, working in a store operated by Offutt. 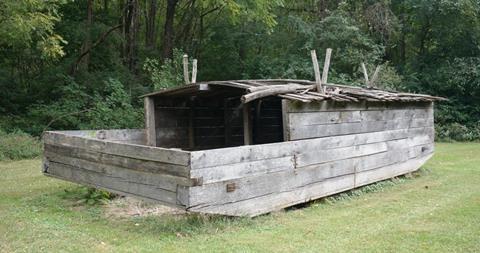 In the summer of 1831, Offutt was said to have bet money that Lincoln could out-wrestle Jack Armstrong, the toughest of the Clary’s Grove boys. Afterwards, witnesses couldn’t agree on who won. Some claimed neither man could throw the other. Others thought Armstrong threw Lincoln unfairly. Lincoln prevented Armstrong’s friends from collecting their bets in a way that left no bitter feelings. This ability to sooth ruffled feathers would come in very handy later in his life.

Lincoln began to learn leadership skills in New Salem. During the Blackhawk War in 1832, Lincoln joined a volunteer company and was elected its commander. This was his first “election” victory. He saw no action and was discharged in July 1832.

In 1832 William Berry purchased a half interest in a store. Later that year his partner sold his half interest to Lincoln. Lincoln worked here until mid-January 1833 when he and Berry moved to another store across the street. According to Lincoln, that store soon “winked out.”

With no job, Lincoln had to find other ways to make a living. He worked at the sawmill and gristmill. He was a day laborer, split rails, tended a still, watched over another store, and carried election records to Springfield. At one point he thought he might take up blacksmithing.

Lincoln’s “official” schooling consisted of less than one year at “A.B.C.” schools in Kentucky and Indiana. Despite his lack of a formal education he became an avid reader. At New Salem, he was remembered for the unusual amount of time he spent reading.

He was popular with the townsfolk and was appointed postmaster in 1833. He read all the newspapers that came through the post office. He was also appointed deputy county surveyor. He had no training as a surveyor but he “secured a compass and chain, studied Flint and Gibson a little, and went at it.” He spent over three years mapping new roads, determining farm boundaries, and platting towns. During that time he developed a reputation for honesty. These two positions gave him the opportunity to pursue other interests.

One of Lincoln’s friends was John “Jack” Kelso who lived in a “dog trot” style home. Joshua Miller owned the other “half” of the home. The two men were married to the Turner sisters, so sharing a house made sense. Kelso was a jack of all trades and was considered the town’s best hunter, trapper, and fisherman. Kelso also liked to read, especially Shakespeare. Kelso and Lincoln spent many hours reading and discussing books. It is said that Kelso is the one that encouraged Lincoln to study law, which he learned by reading.

Lincoln’s political career began in New Salem. In 1834 he ran for and was elected to the Illinois House of Representatives, being reelected three times. He supported commercial development through government construction of roads, railroads, and canals.

While living in New Salem, Lincoln fell in love with and became engaged to Anne Rutledge, the daughter of James Rutledge, one of the town’s founders. When she died from an illness on August 25, 1835, Lincoln was grief stricken.

He supposedly fell in love with another woman in New Salem. He courted her and, while he had second thoughts, he asked for her hand in marriage. She declined much to his relief.

In 1837, Lincoln moved to Springfield, Illinois where he began to practice law and to climb the political ladder that would eventually lead to his election as our sixteenth president. 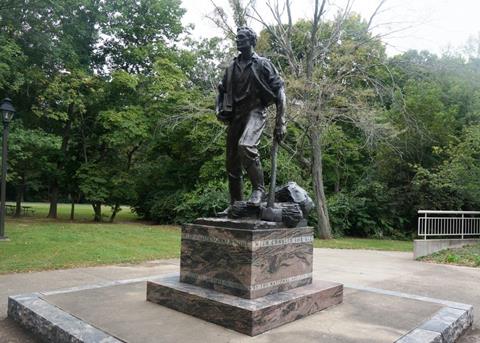 New Salem’s decline began when it was determined that steamboats could not navigate the Sagamon River. Residents began moving to nearby towns and New Salem “disappeared” in the early 1840s.

The state of Illinois has recreated the village using drawings and personal accounts that have survived the times. One of the cabins is the original from the time Lincoln lived in the town.

The Historic site has a gift shop and snack bar near the visitor center as well as a second, very nice, gift shop at the back of the village. Entry to the museum and village is by donation. The New Salem Campground and picnic area are adjacent to the site. The Kelso Hollow Amphitheater is an outdoor theater behind the visitor center and puts on plays throughout the summer. It had closed for the season shortly before we arrived.

Once a year, Lincoln’s New Salem holds a “Candlelight Walk” event. This year it was October 7th and we were lucky enough to extend our campsite reservation so that we could stay for it. They reopen everything in the evening and the walkways throughout the village are lit by old fashioned candle lanterns on posts. Almost every building was open and lit and had Living History Interpreters in them. It was excellent and we thoroughly enjoyed seeing the village at night and learning from all those volunteers.

Another interesting note, there was a nice log building near the entry to the site and we later learned they have a summer camp there. Part of the camp is for teens to learn to be historical reenactors so they can volunteer in the village. They learn the history then spend part of their summer camp week portraying different characters when the village is open.

This entry was posted in Campgrounds, History, Museums, Parks and tagged Illinois. Bookmark the permalink.