After much searching in the St. Louis area, we opted for Pere Marquette State Park as our home base for touring Cahokia Mounds. There was no central location to stop at since this was a dip in our travels. We left Springfield, Illinois with plans to hit Cahokia Mounds then loop back up to Hannibal, Missouri. We’ve spent time touring near St. Louis previously but had missed Cahokia so we decided it was time to swing back through to check it out.

Pere Marquette State Park is named after Father Marquette who we have run into repeatedly in our travels. That man was all over the place in his little canoe exploring the wilderness and doing missionary work with the indigenous peoples. I started thinking we’d find signs saying “Father Marquette slept here”. I have no doubt we’ll be doing a “String of Life” posting on him before long. I’m amazed at the distances people traveled through the wilderness – no maps, no roads, no stores, and no help if you get into trouble. Yet, off they went, time and again, into the wilderness for months or years at a time… (Sorry, slight diversion from the topic of this post, getting back on track now.)

The campground was decent. It is along, but not in view of, the Illinois River and just upriver a bit from the confluence with the Mississippi. It is an Illinois State Park and Illinois is broke so maintenance is lacking a bit. Our site was fine, mostly level, nicely treed, plenty of space. Some of the sites were seriously rutted and some of the power posts were out of commission but the campground was almost empty so everyone that rolled in was able to find a good site. The bathhouse was clean and functional. They have both reservable sites and walk ins. 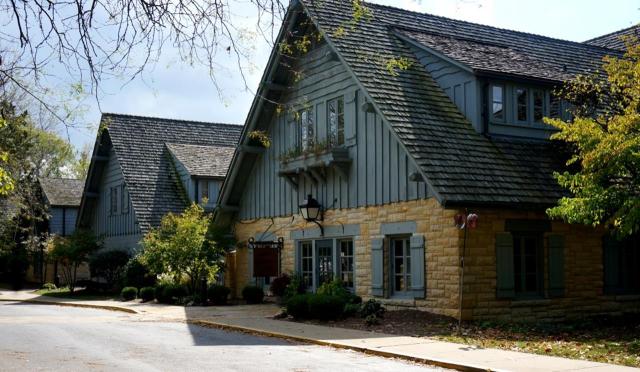 We did not have Verizon service at the campground and our goal is to catch up bit by bit on our lagging blog posts so we spent some time in their beautiful lodge using their free Wi-Fi. The Lodge is within walking or biking distance of the campground. It has rooms for rent in the lodge as well as cottages circling a nice greenspace in front of it.

We had a very nice dinner at the lodge (with awesome dessert… which I ate as a snack before dinner) and we were surprised to hear that they get several tour buses in each day. Lucky for us only one rolled in while we were chilling at the lodge. We had a swarm of people for an hour or two then they were gone. The lodge is open to the public even if you are not staying there and the staff at the desk were very helpful. There is a beautiful patio with tables and chairs overlooking the river, comfy chairs and tables inside the lodge (with electric outlets in some spots), a huge fireplace, giant chessboard and more. There is also an indoor swimming pool for lodge guests but we couldn’t sneak a peek.

On the wall of the main lodge room they have a board with “things to do” at the lodge or in the area in case you tire of lounging around the lodge. It was nicely done and had options for all tastes and activity levels along with phone numbers or websites to help make it happen. I thought this was a really nice touch and probably took some of the repetitive questions off of the front desk staff (though I know they were happily helping anyone that asked).

I was amazed at the quilted hangings they had in the main room. They were huge and gorgeous. It looked like hundreds of individual quilted leaves stitched together in a double curtain with a sheet of semi-transparent “water” extending from the bottom of one side. We could make out turtles, snakes, snails, dragonflies, fish, lily pads, spiders and more in the quilting. Absolutely stunning! We have friends that quilt so I took quite a few photos so I can send them along to them. It would have been nice to get closer (we left the telephoto lens at the rig) but I figured they’d throw us out if I started climbing chairs and tables so I behaved.

The park has a lot to offer. It is the starting point of a paved bike trail that runs over 20 miles along the river road toward St Louis. We saw quite of few people enjoying that trail. They have a nice little visitor center, scenic drive with overlooks, quite a few hiking trails, group camping areas, grassy picnic area and marina. It was hot while we were there but it was supposed to cool down so we had discussed staying a few extra days to do some hiking along those beautiful bluffs and to tour the wildlife areas between the rivers. But I kept checking the weather and flood warnings. I was thinking it might be best to move on. John felt we didn’t need to worry because the locals weren’t freaking out. I told him they are used to it and they can drive out over the bluffs, whereas we did NOT want to take the RV up and over that twisty narrow scenic drive with no guardrails and cliff-like drop offs. He brushed off my concerns, said we had several feet before the water topped the river road and he thought I was worrying for no reason but he did finally agree we could move on.

John took photos along the river the day before we left. The Illinois River was flowing rapidly UP STREAM due to the massive amount of water pushing down the Mississippi. Somewhere above us was a meeting of the flood waters coming down the Illinois and the flood waters pushing up from the Mississippi. While our campsite may have been a few feet up in elevation from the swollen river, flood forecasts called for a rise of approximately one foot per day over the next four days. That was MORE than enough to put the road, and maybe our campsite, underwater.

I could see John taking pictures, then pausing and watching the water. He was finally thinking about the amount of water swirling in front of him and mentally measuring the rise of land to our rig’s spot but he didn’t say anything. He also didn’t make any further comments about our planned departure the next day.

This entry was posted in Campgrounds, Hiking, Parks, Restaurants. Bookmark the permalink.