Cahokia Mounds is an incredible park that has been on our must see list for a long time.

Even their front doors are incredible – although they are now permanently locked and have been replaced by “conventional” doors due to the extreme weight of the metal doors.

Sadly, the finances of the state of Illinois are such that the park is closed on Mondays and Tuesdays. (So are all the other Illinois state park visitor centers.) We were not aware of that and showed up on a Monday. The doors were locked and there was a sign on the door telling us they were closed. Unfortunately their website didn’t indicate that they would not be open. Just so you know, don’t go on Monday or Tuesday.

Even though the visitor center was closed the first time we showed up, we did a brief walkabout and drive about to see some of the mounds. You can walk if you choose to as there are miles of trails that thread among the mounds. We did some walking but not a whole lot – heat and humidity one day and a cold drizzle on the other dampened our desire to hoof it.

We trekked to the top of Monks Mound, the largest prehistoric earthwork in the Americas. The mound takes its name from French Trappist monks who lived near the site in the early 19th century. 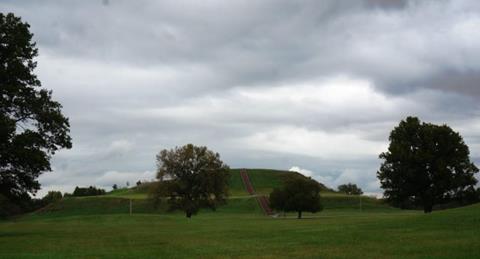 It might appear to be just a pile of dirt, but it was built one basketful of dirt at a time. Each basket could hold about 1.5 cubic feet of earth. To give you some perspective:

For another perspective of the size of Monks Mound, here’s a view from the top. The visitor center is at the left center of the image. 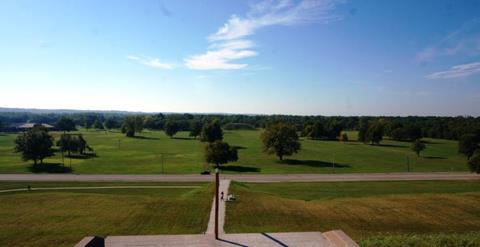 View from the top of Monks Mound

And that’s just the one mound. There are many, many others. And the natives who built them also had to grow and catch food, build shelters, make clothing, raise families, and do all the other things that a society does.

There was a very good mural on one wall depicting what life might have looked like when Cahokia was a bustling metropolis. Sadly, no one knows for sure because the Cahokians left no written records. 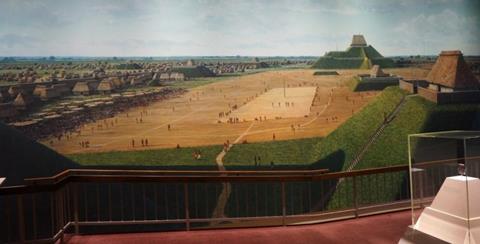 Mural of life in Cahokia

One of the first displays I saw was a model of Cahokia. Lights outlined the park’s boundaries and there was a model of each mound. There were dozens and dozens. This city was truly massive. And in addition to the mounds there were dwellings and other buildings that have long since disappeared. 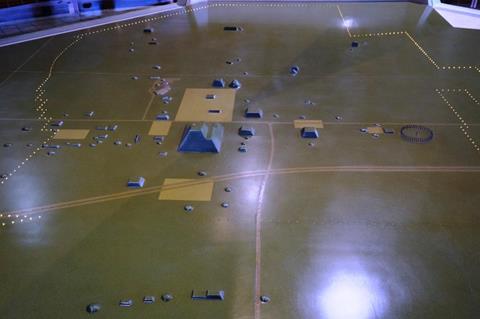 Cahokia formed a rough diamond shape aligned on a north-south and east-west axes with Monks Mound in the center. The site stretches 3 miles east to west and 2-1/4 miles from north to south. It is estimated that up to 60 million cubic feet of earth was used to build the mounds and level the plazas.

The inhabitants of Cahokia were Mississippian peoples. Displays traced their origins back to the migration across the Bering land bridge and eventual settlement in the American Bottom where four distinct eco-zones came together: Ozarks, Prairie, Easter Woodlands, and Mississippi Valley. The visitor center has artifacts going back to 10,000 B.C. when Paleo Indians roamed the area.

Cahokia was a first line community that, at its peak, had a population of 10-20,000. It covered an area of about six square miles and had about 120 mounds. The 40-acre Grand Plaza, just south of Monks Mound, was used for public gatherings, markets, and festivals. Other smaller plazas were located to the north, east, and west of Monks Mound.

One of the more interesting exhibits, and there were many, was a large diorama of native dwellings where the inhabitants were going about their daily life.

Mississippian communities were not isolated from one another. Cahokian artifacts have been found as far north as the Upper Peninsula of Michigan, as far east as Florida’s Atlantic coast, as far south as the Gulf Coast of Alabama, and as far west as Oklahoma.

A few of the many artifacts

As a final thought, at Cahokia’s peak, around 1250 A. D., it had a larger population than London did at that time. While London grew and thrived, Cahokia mysteriously disappeared. No one knows why they left or where they went.

This entry was posted in History, Museums, Parks. Bookmark the permalink.