The trading post that would become Fort St. Jean Baptiste and the town of Natchitoches was founded over 300 years ago. The site they chose was ideal for making trade connections. The Red River flowed into the Mississippi River nearby, connecting this area to French Canada and the Gulf of Mexico. A bridge was built over the original location of the fort, so this site is a reconstruction based on original maps, drawings, and documents.

The visitor center had a good set of exhibits about the fort and the French, Spanish, and native inhabitants.

One artifact really got my attention. A brick had the footprints of a toddler pressed into it. The brick was stamped 1756. That brick sent a slew of ghostly images through my mind and raised a lot of questions. Who was this child? Who were his parents? Where did they llive? What did they do? What kind of life did he or she have? 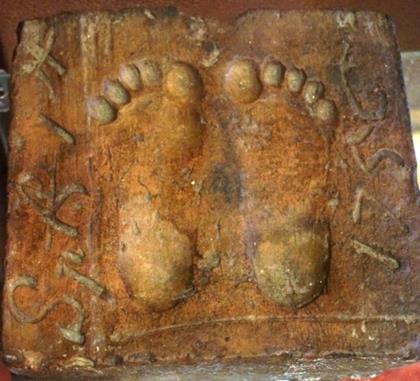 We had a very good tour of the fort. We were the only two people on the tour, so our guide, who was an anthropologist, didn’t give us the usual spiel. He was quite outspoken – in a good way – about his views of the fort’s history and the people who lived here. He certainly demonstrated his passion for this place.

Interior of the fort

A few of the buildings’ displays are works in progress. The park staff is trying to create a more “lived in” look to the buildings’ interiors. For example, in the barracks they are working on displays illustrating what a soldier’s life was like, what he wore, what he ate, etc. One wood planked “bed” ran the length of the room and was shared by eight soldiers.

What I would like to see in the fort are more explanatory signs giving some details on the daily life of the fort’s various occupants.

Natchitoches was one end of El Camino Real, the Royal Road, that linked Spanish claims in this area with Mexico City. Although it was prohibited by both the Spanish and French governments, trade flourished among the Spanish, French, and the local Caddo tribe.

This entry was posted in History, Parks, Walking Tours and tagged Louisiana. Bookmark the permalink.