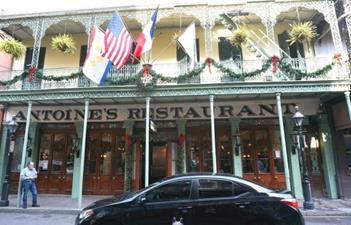 New Orleans has many great places to eat so we continued to eat our way through Louisiana. Every restaurant, cafe, or coffee bar we hit was good. One local claimed New Orleans doesn’t have any BAD restaurants. Nothing we experienced could prove that statement false. Here are the places we ate:

Cafe Du Monde – This is apparently a required stop in New Orleans. They are open 24 hours, cash only, pay upon delivery of food. It cost $6.00 per person for a plate of 3 beignets with a ton of powdered sugar and a cup of Cafe au Lait (tax included, tip not included). It was very nice. Did I mention they are open all night? There is no last call in New Orleans. Bars are not required to stop serving. I’d love to people watch the drunks trying to manage all that powdered sugar in the wee hours of the morning but, alas, we are snuggled into our beds long before that. NOTE: Do NOT inhale while biting into a beignet. The powdered sugar jumps down your windpipe and you will entertain your friends to no end. Once you recover, you’ll find yourself (and your friends) covered in powdered sugar.

Gris Gris – Located in the Garden District. Very, very good. We were seated at a modern counter/bar that faces the open kitchen. They have an actual bar with more tables upstairs. The food was excellent. We enjoyed red beans and rice, chicken and andouille gumbo and an awesome roast beef po-boy (I’m salivating just remembering it – so messy, so good). The bread pudding they pulled out of the oven in front of us smelled amazing but we were too stuffed to order it. I regret not getting one to go but it would have probably caused excessive drooling on the bus. Side note – the bathrooms have cool modern fixtures. How modern? They are SO modern that I could not figure out how to turn on the water. After what seemed like forever, I discovered the little silver post on the counter works like a joystick – just make sure that fancy articulated faucet is pointing down into the sink before you turn it on! I lucked out on that one. John thanked me for the heads up before he visited the facilities. He said he would have never figured it out. 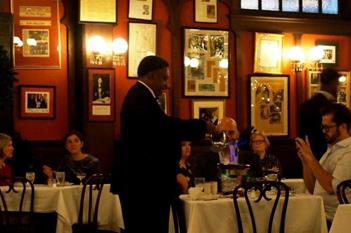 Antoine’s – This has been a New Orleans classic since 1840. They were recommended by the visitor center up on Basin Street and then again by a man we chatted with as we walked into the French Quarter… he turned out to be a waiter at Antoine’s. We decided it was meant to be. Since this is the 300th anniversary of New Orleans, Antoine’s was serving a 3 course lunch for $20.18 with the option to buy up to three of their daily cocktails for $.25 each. We were underdressed but they didn’t turn us away. Lots of people came in all decked out for Holiday luncheons. Between the two of us we had Butternut Squash Bisque (with andouille sausage), Mandarin Salad, Skirt Steak over horseradish mash topped with a red wine truffle mushroom sauce, Breaded Veal over pesto rice and topped with a garlic roasted tomato sauce, Pecan Bread Pudding and Apple Crumble. The two options on the menu we skipped were Charbroiled Oysters as a starter and Shrimp Regua as the main. The cocktail was a berry lemonade martini or some such. It was all excellent. The specials changed recently for a winter menu and the deal isn’t available on Sunday as they do a big Sunday Brunch. We might have to try their winter menu when we return in January.

Cornet – This restaurant is on the corner of Bourbon Street and St. Peters. You walk into what looks like a basic bar but it has a small sit down restaurant area in back and a larger dining area with bar and wrought iron balcony seating upstairs. The upstairs was closed when we were there but it was really chilly so we had no desire to sit on a balcony and people watch anyhow. We chose to do that from the table in front of the window. As a bonus, their bathroom was blasting heat and it felt wonderful. I stayed in there until I was thoroughly thawed. The backstory on this restaurant is “Born from the family that gave Louis Armstrong his first horn” which was a used cornet they bought at a pawn shop – it is on display at the US Mint/Jazz Museum. We both had the “Tour of New Orleans” with excellent gumbo, OK jambalaya (good taste but more like a rice side dish) and Cochon de lait (slow roasted pork) that was excellent. They also infuse their own vodka and I enjoyed a blueberry infused drink that was so nice that I decided to go ALL OUT and hit my personal drink limit… which is two. The second drink traveled down Bourbon Street with us. The open container law in New Orleans is something along the lines of “not in your car when it’s moving”. Other than that, more than half the people we saw had a drink in their hand. The to-go cups are stacked on every bar and if your drink came in an actual glass, they’ll be happy to transfer it to plastic before you go.

BB’s BBQ – Located near the French Market had very good BBQ. Their sign advertises live music all day and night. There were no signs about a cover charge and we chatted with the guys at the door before we walked in and they didn’t tell us there was a charge. But, SURPRISE! They tack an extra $1.00 per person on our bill for “BB’s Guarantee” When we asked about it, they said it was instead of charging a cover. I told them it needed to come off our bill or I needed to see a manager. They opted to remove the charges. We had ordered full lunch platters and drinks, tipped the waitress and tipped the band then got hit with the extra charge. I don’t mind paying a cover charge WHEN I know in advance and can decide if I want to pay a cover. I don’t pay random charges that pop up after the fact. It’s like finding a hidden charge on your check for the ice in your glass. Shame on you BB’s BBQ! This tourist felt like you were trying to rip us off. AND to add injury to insult, the bathrooms were out of order. They didn’t close the restaurant or tell anyone until they asked where they were. Then they told us to go find a public restroom in the very busy French Market across the street. After walking left for a block without success (left being the direction they pointed), we gave up then walked right for that block plus another whole block. We finally found relief. We will NOT be going back to BB’s.

Gallier’s Restaurant on Carondelet just upriver of Canal Street – We had a nice Cajun Penne Pasta with andouille sausage and a chicken and sausage gumbo (you may have noticed the repeats on gumbo – Holly really likes gumbo and keeps trying different ones). Both dinners were very good. This is a small restaurant/bar like so many others in the city and would be easy to miss. We almost went to another restaurant just up the block but it was 3:00 pm and many restaurants serve only breakfast and lunch and close the kitchen at 2:00 or 3:00. We’re glad we got rerouted to Gallier’s. John had seen a sign for Cajun Italian food days back but we couldn’t remember where so we were lucky to stumble onto this one. It is on the St. Charles Trolley Line.

PJ’s Coffee – Located in the French Quarter on Decatur – yummy baked goods and coffee. The bathroom was interesting. The man working the counter keys a code into a big keypad on a door in the wall. You go through and down a hall. You are now in a hotel and are walking past the doors to the rooms and their private gated side entrance to the street. Just down another hallway you can see into their courtyard with tables and chairs. The French Quarter is like a puzzle (Tetris for those familiar) where the little blocks fit together over, under and side by side. Quirky.

The Lighthouse – at Pontchartrain Landing where we stayed. Very good food, drink specials and free live bands on Friday and Saturday nights. We loved having good food and beverage right there in camp. The campground was also very good. It is pricier than we usually do but was a great deal for proximity to downtown New Orleans. They have laundry, showers, swimming pool, hot tub, restaurant and bar, camp store/gift shop, marina and more. They have all different rental units around the property so even if you aren’t in an RV, you can stay there.

This entry was posted in Restaurants and tagged Louisiana, New Orleans. Bookmark the permalink.