“No individual has any right to come into the world and go out of it without leaving behind him distinct and legitimate reasons for having passed through it.”
George Washington Carver

This was an amazing man. Born a slave; Small in size; Frail and sickly; Black when it wasn’t good to be black with all the added hurdles and hardships that came with it. And yet, he left behind an astounding number of “distinct and legitimate reasons for having passed through” this world.

We decided to visit the Tuskegee Institute National Park site after we spent most of the day at the Tuskegee Airmen base. They were over 45 minutes from our campground so we decided to do two in one day. While this would probably be easy for most people, it was really hard for us. We felt we had missed so much by rushing through. Next time we will move our camp so we don’t have to skimp on our touring time. 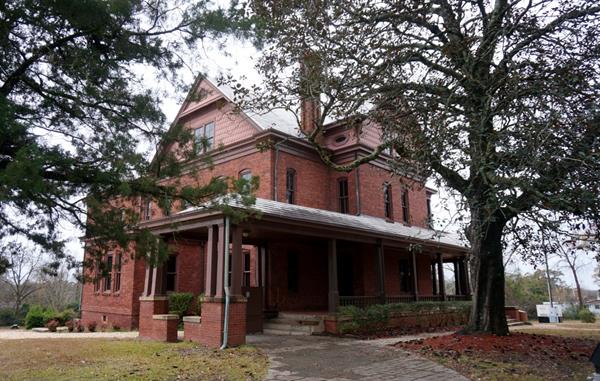 The museum covers Carver’s early life, his continuing quest for education and his love of discovery. Even as a child, Carver would go out into the woods, find a plant and ask the creator what it was for. He believed everything was put on this earth to benefit man and we just needed to figure out what to do with it. He was REALLY good at figuring out what we can do with many of the plants he encountered. Now this great scientist did not originally go to school for agriculture, botany or any of the other things he is known for. He wanted to be an artist. An art professor felt a black man would have a hard time making a living off of art and steered him toward Botany. It’s lucky for us he did but Carver did not totally give up art. Some of his paintings are on display in the museum. Also on display are the pigments he made from Alabama clay, the pottery he made from Alabama clay, the rugs and cloth and rope and other items he learned to make with local plant fibers, the dyes he made, and so on. Once he figured these things out, he taught the local farm families to do the same. He taught them how to grow vegetables to feed their families and how to cook them and preserve them. The farmers were too busy on their farms to travel to Tuskegee to see what they could learn. They were busy struggling to live off their depleted farms. So Carver invented a rolling classroom and took the lessons to the farmers.

As you can see, once Carver was working at Tuskegee Institute, his focus turned to assisting the agricultural community of the south. He wanted to put food on everyone’s table. He wanted to improve the soil and thus improve the crop yield. His tests of the soil showed that their cotton crops were depleting the soil. He figured out that rotating the cotton with nitrogen rich plants like peanuts, sweet potatoes and soybeans would refresh the soil. It worked. The cotton crop was doing great as were the alternate crops they rotated in the fields… BUT, now what do you do with all those “other” crops? You need a market. There wasn’t a market for them so he made one. Back to the lab tables he went to search for answers… and back to the creator to ask “Mr. Creator, will you tell me why the peanut was made?” And, apparently, the Creator did answer because the list of products that Carver created from the peanut is long (over 300), however, it does NOT include peanut butter. I find that incredibly interesting that he never thought to grind the actual peanut into a paste and eat it. Below is a list of uses that he found for those surplus crops (in order shown on the chart): peanuts, sweet potatoes, soybeans. Not all of these products “took off” but enough of them did that crop rotation became a standard and the farmers made money both on cotton and their “alternate” crops.

John and I were amazed at how many different things Carver did during his life. He was consulted as a child by local farmers on how to improve their soil. By 11 he was on the road in search of a more thorough education. He not only finished college but went on to advance studies at Iowa University. Finally, he was invited to join Tuskegee Institute where he had his own lab and taught students. His students loved him but he wasn’t fond of teaching. He just wanted to research, study, learn and help people. Eventually he was able to do just that.

I loved his favorite poem. It is posted in the museum with an audio recording of him reciting it. The poem is “Equipment” by Edgar A. Guest. You can read it here: www.tuskegee.edu/support-tu/george-washington-carver/carver-favorite-poem

This entry was posted in History, Museums, National Park. Bookmark the permalink.