I grew up in the 1950s and 1960s so much of what I’ve been learning wasn’t taught when I was in school. That’s because the fight for civil rights wasn’t history yet, it was the day’s news.

Much of what I knew was a mere snapshot of a much larger panorama. The more I learned, the more I have come to appreciate the sacrifices people made to create a better life for everyone.

Visiting these sites was a sobering experience.

Montgomery is the capital of Alabama.

Much of Montgomery, Alabama’s history is a story of hate and subjugation. It is a crossroads between slavery, Jim Crow, and Civil Rights.

Slave traders had their offices along the main streets. Slaves were held in warehouses with livestock, both waiting to be auctioned to the highest bidder. Slaves were sold at Court Square. Families were torn apart, husbands from their wives, children from their mothers.

On April 11, 1861 the telegram that authorized the bombardment of Fort Sumter in Charleston, South Carolina was sent from Montgomery.

Where the order that started the Civil War came from

Dr. Martin Luther King, Jr. preached for six years at the Dexter Avenue Church. He developed the concept of nonviolent direct action, which he learned from studying Mahatma Gandhi.

Rosa Parks, by refusing to give up her seat, sparked a nonviolent rebellion against segregated transportation.

Dr. King and other black leaders organized the Montgomery Bus Boycott that led to the desegregation of Montgomery’s transit buses.

Freedom Riders risked injury and death in the nonviolent fight to desegregate interstate transportation. Some were severely beaten right outside the Montgomery Greyhound Bus Station.

I emphasize the term nonviolent because rebellions and fights do not always have to involve violence. It’s also important to note that nonviolence was preached and practiced by the protestors. Not so for their opponents. There was a LOT of violence from those that objected to them and their goals.

We stood at the bus stop where Rosa Parks stood before she got on a bus on December 1, 1955. On that fateful day Rosa Parks became larger than life when she later refused to give up her seat to boarding whites. When she was arrested she sparked a revolution and became the “Mother of the Civil Rights Movement.”

No photography was permitted in the main museum, so all I have to relate is what I can remember.

Their main “attraction” was a visual recreation of the “incident.” You are standing beside a transit bus and can see white and black passengers in their “proper” places. Rosa is already on the bus, sitting toward the front with two other black passengers. The bus stops and passengers get on and off. Eventually some white passengers get on and there are no available seats at the front of the bus. The driver orders Rosa and several other black women to move to the back of the bus. The other women do, but Rosa stays seated. The bus driver isn’t sure what to do. He eventually calls the police who come and ask Rosa to move. She continues to refuse and is arrested. She does not resist and she is not mistreated.

Over the next few days the Montgomery Bus Boycott is organized.

The bus boycott started on December 5 and lasted 382 days during which blacks refused to take the bus. Blacks walked, bicycled, rode mules, and hitchhiked. Some boycotters organized carpools to transport people where they needed to go. Even some white housewives, not willing to give up their servants and domestics, drove them to and from work.

This unassuming church in the shadows of the Alabama State Capitol in Montgomery provided the platform where Dr. Martin Luther King, Jr. launched his career as a Civil Rights leader.

Dr. King served as the pastor here from 1954 to 1960. He came to national prominence when he helped organize the Montgomery Bus Boycott in 1955.

Because Jim Crow laws prohibited gatherings of more than a few blacks, black churches became the focal point for the desegregation fight. Often, black pastors became leaders and organizers of protests and boycotts. They also became targets for opponents of desegregation.

We took a tour of the church and our tour guide, Wanda, was phenomenal. As Holly and I were the only two on the tour, our conversation with her took on a more personal tone. We had a very open, honest, and frank discussion.

She showed us the pulpit where Dr. King delivered his sermons. David Oyelowo, the actor who portrayed Dr. King in the movie Selma, was allowed to autograph the pulpit. We haven’t seen the movie but will when we have the opportunity.

She showed us the office Dr. King used while he was the pastor there. This was where Dr. King directed the Montgomery Bus Boycott.

She then took us into the church where services are still held. It is a bright, light, clean, and beautiful church. 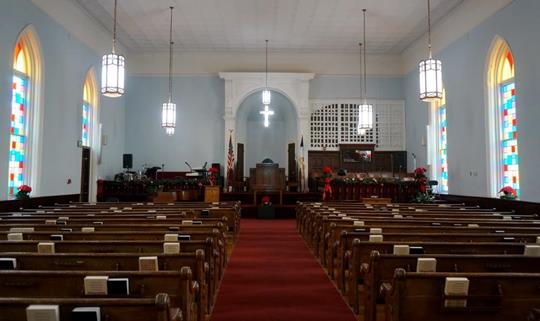 This small museum is housed in a former Greyhound Bus Station.

The Freedom Rides are, in my opinion, one of the lesser known events in the Civil Rights movement. Their goal was to force the desegregation of interstate transportation. This included buses, trains, and airplanes that crossed state lines. That brought their regulation under the Interstate Commerce Commission (ICC).

The original Freedom Ride was sponsored by the Congress of Racial Equality (CORE). Thirteen Freedom Riders, white and black, left Washington, D. C. on May 4, 1961. The ride was abandoned ten days later after Ku Klux Klan resistance in Alabama. Sit-in veterans in Nashville, Tennessee, trained in nonviolence, took up the struggle. On Sunday, May 20 the unarmed passengers stepped off the bus in Montgomery. Suddenly an angry white mob of men, women, and children appeared. They first attacked reporters and smashed their cameras. Then they went for the riders, severely beating several of them.

Ignoring Robert Kennedy’s plea for a cooling off period the Freedom Rides resumed on May 24. Hundreds of other Freedom Riders took up the cause.

Arrests of Freedom Riders continued. Rather than post bail, many opted to remain in jail. Their mantra was, “Jail. No bail.” In retaliation, many of those arrested in Mississippi were moved to Parchman Prison, a notorious prison that also housed the state’s death row.

On May 29, Robert Kennedy ordered the ICC to “declare unequivocally by regulation that a Negro passenger is free to travel the length and breadth of this country in the same manner as any other passenger.” On November 1, 1961 regulations desegregating interstate transportation went into effect.

The Civil Rights Memorial Center was built be the Southern Poverty Law Center (SPLC), a civil rights groups that tracks hates groups of all kinds. Because they call out the intolerant, they are potential targets of terrorists. So security was tight and all we had to pass through a metal detector. Staff and security were pleasant and helpful. We talked to one gentleman for quite some time. We find it easy to find something in common to talk about. Conversations then have a tendency to take on a life of their own.

Like the Rosa Parks Museum, no photography was permitted in the main museum.

The focus of this museum was lynching. The stories of 40 lynching victims were told. They were mostly black but included a few whites. The victims were young and old, men and women. Some died going about their business and were just in the wrong place at the wrong time. Others were targeted in order to terrorize others into silence.

They had a screen with the names of people who agreed not to remain silent when they saw injustice. If you wanted to you could add your name to the list. I did.

“History, despite its wrenching pain, cannot be unlived, but if faced with courage, need not be lived again.”
Maya Angelou

This museum is run by the Equal Justice Initiative.

Security was tight and all museum visitors had to pass through a metal detector.

Like the Rosa Parks and Civil Rights Memorial Center, no photography was permitted in the Legacy Museum.

The museum is located in what had been a warehouse where slaves and livestock were kept prior to being sold on the auction block.

The main hall of the museum cataloged the legacy of slavery. In one exhibit, slaves in chains are locked in cells and talk to you about their plight. A young boy and girl, brother and sister, are alone in a cell. The boy looks out and calls, “Momma?” over and over. The little girl looks on in silence. In another exhibit, a slave owner who had to sell all his slaves wrote descriptions of each slave, giving their name, age, temperament, and skills. A resume for slaves.

Other exhibits and videos showed segregationist speeches, gatherings, and marches. The South did not give up its racist, segregationist practices easily. While it is much better than it was 50 years ago, there’s still room for progress. One area the museum tries to address is mass incarceration of blacks. During the tough on crime era, many blacks were sentenced to mandatory or long prison terms for drug crimes. Crack was a “black” drug. Powdered cocaine was a “white” drug. Being caught with similar quantities had drastically different penalties. These and other biases in our criminal justice system result in harsher treatment for blacks.

National Memorial for Peace and Justice

For those abandoned by the rule of law…

If visiting the National Memorial for Peace and Justice makes you feel uncomfortable, like it did me, then that’s a good thing. The horrors white Americans perpetrated in the name of “justice” should never be forgotten, lest we should repeat it. The memorial asks us to remember the more than 4,000 black man, women, and children who were lynched in the United States.

When I think of lynching, I think of hanging. But in this context, it means any extrajudicial murder committed by a group. That included being beaten, stoned, drowned, shot, stabbed, hacked, burned, and many other inhuman ways to kill.

The memorial is haunting to see. You pass row upon row of coffin-sized metal boxes. Each box represents a county were a lynching occurred. The names of all those lynched in that county along with the dates of their lynching are cut into the box. You start your journey at the top of a ramp where the coffins rest on the ground. As you descend the ramp, the coffins slowly rise until they hang above your head. You must look up to see them.

Some might think “they” all deserved it because they were accused of raping or murdering whites. First, few of them were accused of committing any crime. Second, those that had been accused had not been tried before being lynched.

On the path around the memorial, we saw a series of bronze statues of slaves, chained at the wrists and ankles. You can see families being torn apart; men and women being degraded and humiliated.

This entry was posted in History, Museums and tagged Alabama, Civil Rights. Bookmark the permalink.