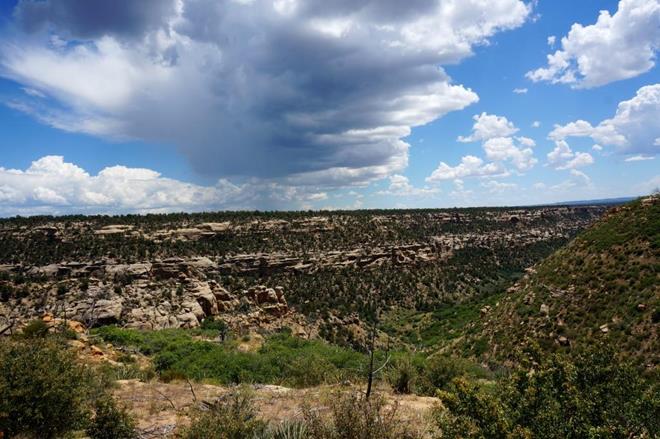 Because we toured Mesa Verde back in 2014 much of this summer’s trip with our granddaughter Chloe was a repeat for us. Last time we were here Wetherill Mesa had been closed for the winter so we missed the sights there. We did not miss them this time around. We thought this visit would be a real treat for Chloe because she had studied Puebloan culture towards the end of the school year.

If you want to take ranger-led tours of the major cliff dwellings (Cliff Palace and Balcony House on Chapin Mesa and Long House on Wetherill Mesa), you need to purchase tickets. That’s the only way you can see those three sites up close. It’s definitely worth it.

So the day we arrived we planned out our sightseeing schedule and bought tickets for those three sites. But before, after, and in between those tours there was plenty for us to see and do. Because of the heat we did more sightseeing from our car than normal although we did get out and walk to overlooks and took several short hikes.

The views are gorgeous. The cliff dwellings are spectacular. The flora and fauna present themselves for our enjoyment (and theirs). And you don’t have to go far to find all of the above.

Lizard gives us a look

Crossing paths with the local wildlife was pretty common. But we weren’t sure if we were more interested in this little lizard or it was more interested in us. As long as we stood still, it didn’t mind posing for us or staring at us.

House of Many Windows

While driving on top of Wetherill Mesa toward Cliff Palace and Long House, we stopped to view the cliff dwellings tucked into alcoves along the side of Chapin Mesa. There are quite a few dwellings perched along the cliff face. It seems that any alcove high enough, deep enough, and long enough had dwellings or storage caches in it.

We finally got to tour Long House on Wetherill Mesa. The trip down and back is about ¾ miles with stairs and switchbacks leading to and from the dwellings. The village snugs into a 298-foot long alcove. We had a full group so it was slow going getting to the village.

Once there you get close up views of a village of 150 rooms and 21 kivas, as well as storage rooms tucked in smaller alcoves above the base of the main alcove. To get to the upper level of the village you have to climb two 15-foot wooden ladders.

The village was built room by room, starting from the back wall and working out. Every room was built for a specific function. When that was no longer the case the room was remodeled or torn down, the materials being reused to build a more functional room.

One interesting feature of Long House is that a spring flows out of the bedrock and runs along the back of the alcove. Although water just dribbles out of it today, it was a critical water source for the Ancient Puebloans.

It was a little too hot for Holly and Chloe so I hoofed on down to Step House. This is a self-guided, 0.8 mile round-trip tour. A Ranger is stationed at Step House to give you more information and to answer your questions. You can gawk, like I did, at a partially reconstructed 1,400 year old pithouse and imagine what life was like back then.

This was a repeat visit to Cliff Palace and Balcony House for Holly and me, but Chloe’s first.

Our first tour of the day was of Cliff Palace, the largest cliff dwelling in North America.

While much of Cliff Palace might look as if it might crumble to dust, a closer look shows just how much attention to detail the Ancient Puebloans paid. They built a retaining wall at the front of the alcove and backfilled it to create a level surface. Their buildings were also durable. Some original plaster still has visible finger impressions on it. Try to imagine the Puebloan working who made those impressions. What couldn’t be moved, like boulders, became part of the design.

Getting up to, through, and down from Balcony House can be a challenge. But not for a healthy, active 12 year old girl. Bounding up stone steps, squeezing through an opening between rooms, and clambering up a wooden ladder was no problem for Miss Chloe. Holly and I aren’t that agile, or svelte, anymore.

While the ladders and chains may seem challenging to visitors today, it is important to note that nothing of the sort existed when the Puebloans lived here. They chipped little divots into the cliff walls to use as hand and foot holds. Much like rock climbers do today, they swung out over nothingness and pulled themselves up or down the cliffsides – but without the safety rope. Attentive visitors can see some of the divots in the rock walls during the tours. We much preferred the ladders.

We were able to catch glimpses of how incredibly durable these buildings were. We could see many of the original posts and beams.

The Ancient Puebloans sure knew how to pick the trees – mostly juniper – that they used for beams and posts. Some, such as the ones shown above, are between 700 and 800 years old.

There’s a 2¼ mile long self-guided walking tour along the Badger House Community trail. Again, being very hot, we did not hike the entire trail. But we did make a few stops, all of which were inside metal roofed structures that gave us some much needed shade. 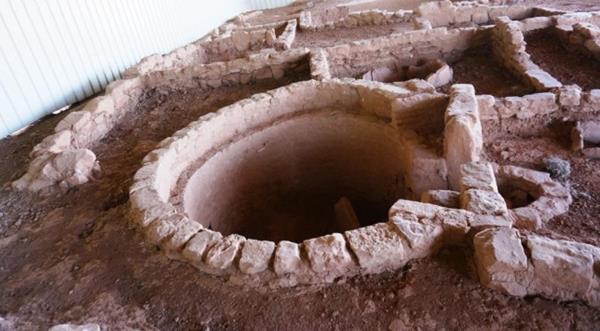 Some houses, such as Two Raven House, raised more questions than they answered. There’s a small underground room, shown above, that has to this day stumped archaeologists as to its purpose. What’s your guess?

Traveling with Chloe is more than just going to a park, quickly exploring nature, and moving on to the next park. She’s a serious Junior Ranger, having earned over 60 Junior Ranger badges during her summer RV trips with us. We take our time to learn about and explore each park we visit.

Although we only spent three days at Mesa Verde, we got around. Like all her other Junior Ranger badges, she went above and beyond the minimum. That’s one of the reasons she’s such a special young person, and not just to me.