We spent several very busy days exploring the Amana Colonies which are comprised of seven separate, but closely related villages: Amana, East Amana, Middle Amana, High Amana, West Amana, South Amana, and Homestead. The colonies were one of many self-sufficient communities that sprang up in the 1800s.

In the case of the Amana Colonies, their bond was religion. Their ancestors were part of a German religious movement that began in the 1700s and were known as Inspirationists. Like many religious movements of that time, they were persecuted for their beliefs. A group of them left Germany in the 1840s, settled near Buffalo, NY, purchased 5,000 acres of land, and working cooperatively, created a thriving self-sufficient community of 1,200. They eventually grew to the point where their land could no longer sustain them. They looked toward Iowa where land was cheap, establishing six villages on 26,000 acres of land, and named them the Amana Colonies. Amana means “remain true.”

Residents of the villages received a home, medical care, household necessities, and schooling for their children. Property and resources were shared. Men and women were assigned jobs but were not paid. They supported their community by farming and producing wool and calico. Craftsmen produced most of what they needed, from clocks to beer and wine.

Their lives revolved around the village churches, simple structures with no steeples or stained glass windows, where they worshiped 11 times a week. They ate three meals a day, plus mid-morning and mid-afternoon snacks, in 50 communal kitchens. Much of their food was provided by village smokehouses, bakeries, dairies, gardens, orchards, and vineyards.

Children attended school year-round until they were 14. Boys were then assigned jobs on a farm or in a craft shop while girls were assigned to a communal kitchen or garden. Select boys were sent to college to be trained as teachers, doctors, and dentists.

In 1932, the Great Depression brought an end to communal life but not to the Amana Colonies. They established a non-profit organization called the Amana Society to manage the farmland, mills, and larger enterprises. The Society keeps the memory of the Amana Colonies alive to this day.

I love museums and this one was no exception. This homey museum has artifacts and writings going back to the early days of the Inspirationist movement in Germany in the late 1600s and early 1700s. It traces the origins of the movement and the eventual migration of its adherents to Iowa.

The museum traced the history of the Amana Corporation, which was founded in 1934. The company slowly expanded from producing walk-in coolers to residential refrigerators, air conditioners, and microwave ovens. The museum has the first Amana Radarange prototype built for home use in 1967.

We got a chance to peak at several active businesses.

While the mill no longer makes yarn, it does still produce textiles which you can buy in many of the villages’ shops. 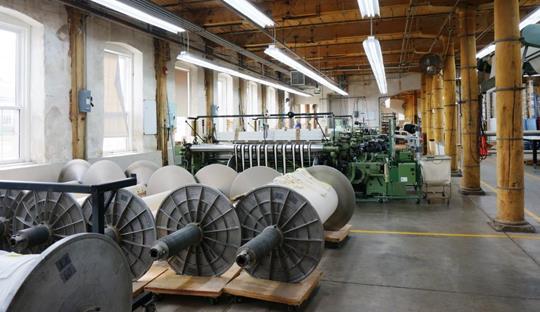 Step into the Amana Furniture and Clock Shop and you immediately see top why Amana is known for quality and craftsmanship. The furniture and clocks are truly works of art. You can also view where this furniture is made by hand. 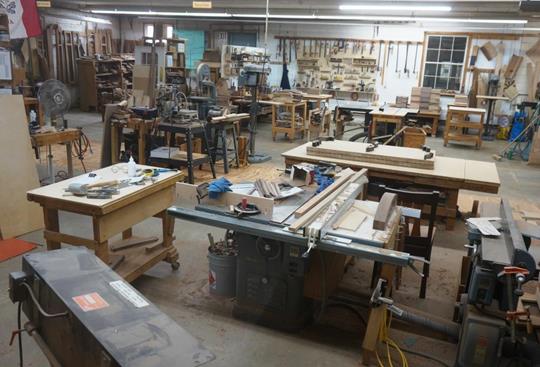 A constant of the Amana Colonies’ daily life were its churches and communal kitchens. Their menus didn’t have much variety but there appeared to be plenty to eat. They seemed to consume a lot of bread, butter, cheese, potatoes, cabbage, and coffee.

Each communal kitchen fed about 40 people and was run much like a restaurant. When girls left school at 14, some were assigned kitchen duty where they prepped meals, set the tables, and washed the dishes. Older women worked as prep cooks, made cheese, canned vegetables, and did the baking.

Each communal kitchen had a communal garden also staffed by women that supplied the kitchen with fresh vegetables.

We stopped in at the cooper shop where workers built all kinds items needed by the community. They built tubs, barrels, butterchurns, kegs, flower pots, washing machines, and wagon wheels.

When boys finished school some of them were assigned as apprentices to a craft or trade based on their skills, interests, or the community’s needs.

There were displays of the tools of the trades. Being accident prone, every one of those tools could have hurt me…a lot.

I was completely fascinated by this museum and took hundreds of photos. It was filled with hand-made miniature replicas built by one man, Henry Moore. His attention to detail was breathtaking. That included people, animals, machines, and landscaping that made these scenes come alive.

This museum is a labor of love. It only cost a few dollars to enter and we spent quite a bit of time chatting with the man at the register. Numerous signs described the scenes and buildings he built as well as how much effort he put into making the scenes as realistic as possible.

I loved his replica of New Salem where Abraham Lincoln spent lived and worked when he was a young man. We previously visited New Salem, so this exhibit was a real treat for me.

Henry built a replica of Cylinder, IA where he went to school. Lumber stacked in the lumber yard were individually cut. Wire fencing was individually cut and hand rolled. Amazing.

An 1880s logging camp was similarly detailed. Wood stacks were individually cut. Shingles were cut to scale. Log piles were from an apple tree that was carefully measured, cut, and cured.

Henry was one extremely talented and patient man.

We stopped in at AJs Copper Garden to see what there was to see. If we didn’t live in a small motorhome, I know we would have bought something. Ten artists build sculptures of copper, brass, and stainless steel.

I particularly liked the praying mantis in front of the store.

We spent quite a bit of time wandering through several of their general stores and did buy some “consumables”, i.e. food and beverages. We didn’t pass up many opportunities to sample the goods in their bakeries. Cakes and pies and muffins, oh my!

We also took the opportunity to eat our way around the Colonies. We stopped at several bakeries, general stores, their Meat Shop and Smokehouse, and a restaurant. No complaints at any of these places.

This entry was posted in History, Museums and tagged Iowa. Bookmark the permalink.