I really liked this visitor center’s museum and gift shop/bookstore. Unfortunately, the theater was closed so, no film. I drooled over and could have spent a lot of money on books but…I already owned about half of them and, living in a small motorhome, buying physical books is a no-no. So I saved a lot of money.

On the wall just before the museum entrance is a Civil War timeline prior to the start of the Atlanta campaign in the summer of 1864. Once inside you get both sides of the story as to why the Civil War was fought. Being a presidential election year, you’ll learn why President Lincoln wanted a clear victory to help ensure his chances for reelection. The war had entered its fourth year and the Union appeared to be no closer to victory. Confederate President Jefferson Davis believed that if his armies could just hold on, the Union would sue for an end to the war.

The museum covered more than the men who fought. It also provided a peak at the men who supported the fighting men.

Civil War Armies were composed of more than infantry, cavalry, and artillery. They had to be fed, clothed, armed, moved, kept informed of enemy movements and intentions, the wounded cared for, the dead buried, and prisoners guarded.

Union supply lines were long, tenuous, and dependent on rivers and railroads to move supplies in bulk. As the Confederates retreated toward Atlanta, they destroyed anything that could be of use to Union forces. Rebuilding the transportation network was an essential, never ending job.

Communications were critical to success and not very reliable. Telegraph lines could be cut, terrain and low visibility could prevent the use of signal flags, and messengers on foot and horseback could get lost or captured.

Topographical maps were essential for both offensive and defensive movements. Here the Confederates, being in their own territory, had the advantage. Besides knowing where the main roads and fords were, local residents could tell them about less traveled trails and fords.

While the museum gives you the “big picture,” it doesn’t neglect the men and women who lived and fought here.

Before General Ulysses S. Grant took command of all Union forces, previous Union commanders had planned single grand strokes that would end the war. All of them failed. In 1864 Grant’s strategy was to maintain contact with the enemy everywhere and bludgeon him into submission. It worked, but the cost was devastating to both sides.

In the Western theater, meaning west of the Appalachian Mountains, Union General William T. Sherman faced off against Confederate General Joseph E. Johnston. Sherman’s objective was Atlanta, a key manufacturing and transportation hub. Sherman maneuvered his armies roughly along the route of the Western & Atlantic Railroad and attempted to get between Johnston’s army and Atlanta. Prior to Kennesaw Mountain, battles occurred on the more vulnerable flanks of Johnston’s army.

Union and Confederate armies clashed in and around Kennesaw Mountain from June 19 to July 2, 1864. Frontal assaults against an entrenched army was risky at best, foolhardy at worst.

However, Sherman took a chance that the Confederates were spread too thin. At 8am on June 27th he launched simultaneous assaults miles apart on Kennesaw Mountain and Pigeon Hill. 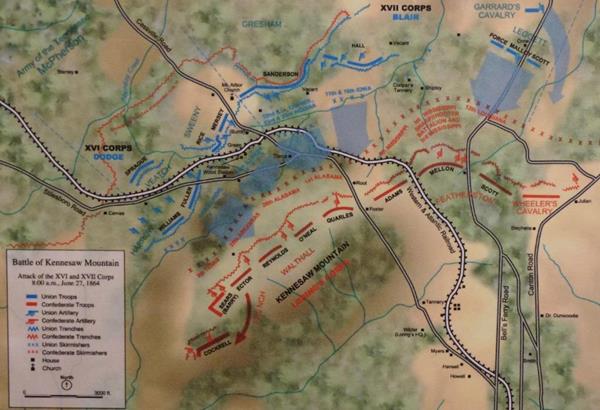 The terrain was steep and heavily wooded. The Confederates were well entrenched with plenty of well-placed artillery.

As if artillery and rifle fire weren’t enough, Confederate troops also rolled rocks down the hills onto charging Union troops. Union casualties were heavy and Sherman soon called a halt to further attacks. 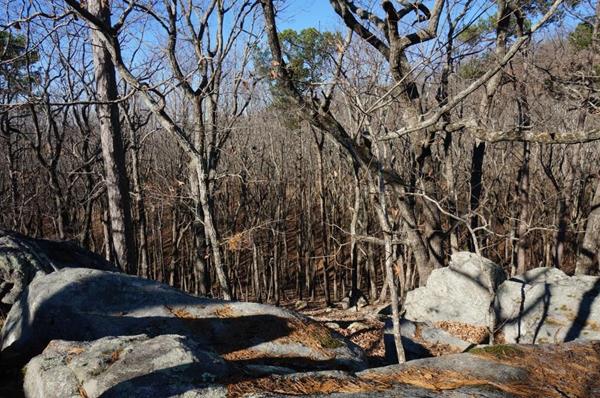 At 9am Union forces tried to storm Cheatham Hill. Thousands of Union troops raced toward what became known as the Dead Angle (bottom center on map). A bloody struggle for the Dead Angle ensued, but the Union attack was finally driven off.

But an Illinois regiment was pinned down about 30 yards below the Dead Angle. Not being able to advance or retreat, they stayed put for six days during which they dug a tunnel under the Confederate lines. They had planned to place explosives in the tunnel and blow up the Confederate earthworks. But the Confederate army withdrew before they could put their plan into effect. In 1914 a monument was dedicated to the Illinois soldiers who fought here. The tunnel is still there.

Realizing that frontal assaults were useless, Sherman began to march his armies around the Confederate’s left flank. Johnston sent General John Bell Hood’s troops to stop him. On June 22nd, Hood’s forces encountered and attacked Union troops commanded by General Joseph Hooker at Kolb’s Farm. Like all the Union attacks, the Confederate one failed too.