We started hiking up the Mosca Pass Trail at 8:30 a.m. The temperature was a brisk 50 degrees.

John on the trail

If you look closely at the above image, you’ll see John wearing an orange vest. Another hiker passed us while he was heading down the trail. He told us there was a hunter not far from the trail. So we decided to play it safe and put on our bright orange, we’re-not-in-season vests.

The trail followed the creek all the way to the top. It took us 3 ½ hours to hike the 3 ½ miles to the top of the pass. That included one snack stop, one lunch stop and many, many catch-your-breath stops. The elevation went from 8300 feet to 9700 feet, so breathing was difficult to say the least. 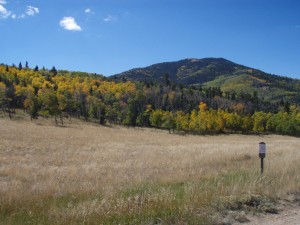 At the top of the Mosca Pass

Although we were tired we had to walk a few hundred more yards to see what was on the other side of the pass. 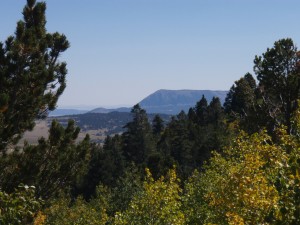 The other side of Mosca Pass

The views along the trail were spectacular. We saw nearly vertical rock walls, meadows, riparian flora along the creek side and views of the San Juan Mountains more than 50 miles away. We also caught glimpses of the sand dunes through the walls of the steep sided canyon. 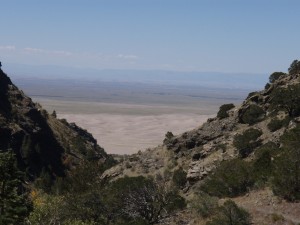 Looking down Mosca Pass toward the sand dunes.

The trail wound around spurs in the mountain one after another. As we hiked and rock stepped up the mountain we wondered where the route was that up to 40 mule drawn wagons a day took over the pass. They certainly couldn’t have been on the narrow, rocky trail we were on and there didn’t seem to be an easier route.

Just before we reached the peak, the creek dried up. The trail map showed that we’d cross the creek  before reaching the top of the pass. We didn’t notice that the creek was dry so we thought we’d made a wrong turn. We weren’t sure how that could have happened because any turn led in only 2 directions – straight up or straight down. Once we convinced ourselves we were “on trail”, we realized that the 10 foot wide, 2 foot dip in the trail was the creek bed and we had, indeed, crossed it.

All in all, we’re doing quite well for an old fart and a mature but slightly decrepit woman. We may not get where we’re going very fast, but we get there.

This entry was posted in Hiking, Parks. Bookmark the permalink.