Far View Trail is a 3/4 mile loop trail that passes six archaeological sites. At each site, there are signs requesting you to stay out of the site, but no real barriers to keep you from doing that. Unfortunately, some people, AKA morons and idiots, ignore the signs and tramp into the sites. We saw recent footprints at the bottom of a kiva. Resist the temptation to get a closer look. To modern Puebloans these sites are sacred, a link to their past.

Far View existed from about 900AD until 1300AD when Mesa Verde was abandoned.

While walking from Coyote Village to Mummy Lake we heard a clip-clop sound. I glanced through the trees and toward the sound. I saw something large and brown. If not for the clip-clop sound, I would have thought it might be a bear – a very large bear. The animal walked into a clearing in the trees and we were staring at a dark brown horse with a black mane and tail. As soon as it spotted us it sped up and disappeared into the trees on the other side of the clearing. Not what we were expecting to find on our hike.

When we got back to the museum we mentioned seeing a horse to a park ranger. He gave us a knowing look and said, “Wild horse.” He told us that there is, unfortunately, a herd of wild horses that escaped from one of the nearby reservations in the park.

Far View House consists of 40 ground floor rooms, an unknown number of second story rooms, and five kivas. Because of its size, archaeologists speculate that Far View House may have been a public house. 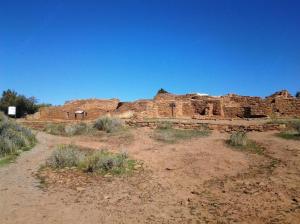 Pipe Shrine House is virtually next door to Far View House. What’s distinct about this house is that the north side’s walls are single-coursed masonry while the south side’s are double-coursed. 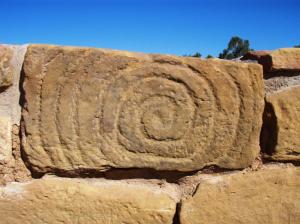 We’re not sure what the above symbol means, but one theory is that it represents the seasons. 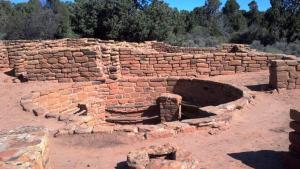 In the above image of a Coyote Village kiva, you can see several wooden beams extending from one pilaster to another. Archaeologists think these may have been used as drying racks or shelves.

Ancestral Puebloans built Mummy Lake as a reservoir. It was 90 feet in diameter and twelve feet deep. Being the reformed geek that I am, by my calculations Mummy Lake can hold 570,000 gallons of water. Embankments built outside the reservoir created a catchment area of 25 acres.

In the above image you can see where water was channeled into the reservoir.

Far View Tower consists of 16 rooms, three kivas (one of which was abandoned), and a two story circular tower. The rooms’ walls were single-course masonry while the tower was double-walled.

We got some spectacular views of cliff dwellings across the canyon as well as examples of early mesa-top dwellings.

I had always thought that cliff dwellings were isolated from each other. Boy was I wrong. What I learned from Mesa Top Drive is how close together some of the cliff dwellings are, almost like next door neighbors. With the Ancestral Puebloans skill at clambering up and down the cliffs, paying a visit to a neighboring cliff dwelling would be as easy as us walking a couple of blocks to a neighbor’s house.

I took the following images from across the canyon. All these cliff dwellings, and more, were clustered in a mile or two long line. 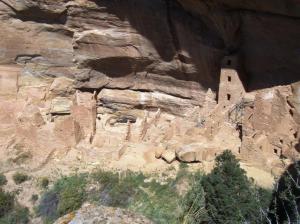 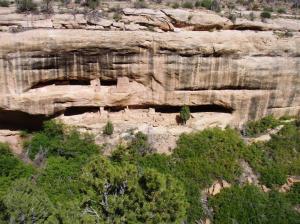 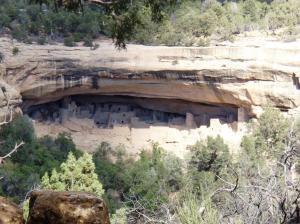 This pithouse dates from about 600AD. What’s missing are the walls and roof. The walls were angled in with a square roof placed on top. Both would have been constructed of logs and mud. Access to the house would have been through a hole in the roof, above the firepit.

This image shows a typical pithouse which consisted of a living area (bottom of image) and an antechamber (top of image) for storage of food and firewood. The holes in the foreground show where the corner poles supporting the roof would have been. The shallow hole in the center of the image is the firepit.

It might not be obvious, but a pithouse was a firetrap. Archaeologists have determined that most of the pithouses they excavated had burned down. The outside walls and roof may have been plastered with mud, but the inside walls and ceiling were not. Over time, the logs would have dried out and easily caught on fire. No human remains were found inside the burned pithouses so the residents either got out during an accidental fire or burned the pithouses deliberately.

This entry was posted in Hiking, National Park, Parks and tagged Colorado. Bookmark the permalink.