There were heavy thunderstorms last night with rain and fog continuing off and on this morning. The lightning would crack and rock the world as we remembered reading that lightning could strike the mesa top over 100 times a day in the summer… hmmm, that would explain the miles of burnt forest we drove through. Sleep was definitely intermittent.

We broke camp and headed out and as we drove the five miles down the mountain we could see the rocks that had fallen on the road during the night, possibly loosened by the torrential rain. Some were pretty good size and we found ourselves peering up into the fog as though we could see if more rocks were ready to rain down on us… as if we could dodge them if they did.

Our plan was to stay a few nights in Cortez to visit the “four corners” marker as well as spend a full day at the Anasazi Heritage Center up in Dolores. The weather has been beautiful so we were surprised to find that the campgrounds around Dolores closed by this weekend so we had to go a little farther afield. It worked out since there were a few other spots we were interested in that we could hit from Cortez.

We stayed at The Sundance RV Park in Cortez and it is pretty nice. They have some good size trees giving shade to most spots and our site is fairly level gravel and wide enough for the coach and the car to park side by side with space left over. It is a small, clean, quiet campground with stores, restaurants and parks within walking distance.

Once we checked in we chatted with the friendly camp host and found out that the “four corners” marker is part of a Navajo park and it would cost us $5.00 each to get in so we could take our pictures on the marker. If we wanted to hike while we were there, we would have to pay more for a “hiking permit”. We decided to skip that and put our money elsewhere, like food.

We had a nice lunch at Tequilas Restaurant in Cortez with excellent food and service then headed to the Anasazi ruins at Hovenweep. It was about an hour and a half drive through a beautiful canyon that is part of the Canyons of the Ancients National Monument. 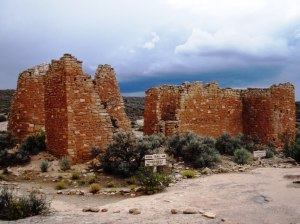 Hovenweep National Monument includes 5 or 6 separate Anasazi dwelling groups around the great sage plain but due to the inclement weather we only went to the visitor center and the Square Tower Group which is on an easy two mile trail right behind the visitor center.

The dwellings are out in the open on the edges and down along the walls of the shallow canyon. These are 800 year old ruins and some still stand two stories tall with most of the original masonry and chinking intact. 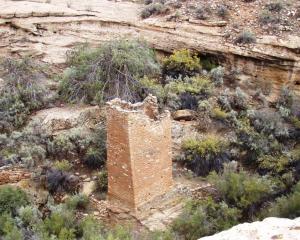 The masonry work is awesome, especially when you consider the blocks were “cut” by dinking away at a chunk of sandstone with a harder rock until the block was shaped… then dinking hundreds more until you had enough to build multi-room, multi-storied buildings. 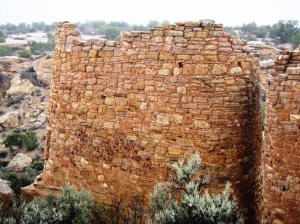 One of the buildings was built on, around and under a huge boulder. The remains of a stone tower ring are visible on top and some of the walls under and around the boulder are still standing.

As we hiked the trail we kept a close eye on the black skies to the north. The wind shifted and the rain rolled in and pelted us as we circled the structures along the canyon. We had rain jackets on but our hats and pants quickly soaked through. Even that couldn’t didn’t dampen our enthusiasm for such beautiful handiwork from an ancient people. We just switched to the waterproof camera for the rest of our shots. The trail back to the visitor center led down and back up the narrow canyon and we had to take extreme care with the wet and muddy rocks. We kept stopping for more shots of the ruins in the filtered sunlight. Once we finally started the hike back out of the canyon, we smiled as we saw that the trail had become a pretty little waterfall as the heavy rain quickly drained off the rocks overhead.

Waterfall rolling down the trail

The sun had come out as we topped the canyon and as we prepared to leave the visitor center we spotted a beautiful rainbow.We debated whether we should run back down the trail to get the ruins with the rainbow overhead but decided rainbows are fickle and it was bound to disappear just as we reached our chosen photo spot so we took the shot from there. 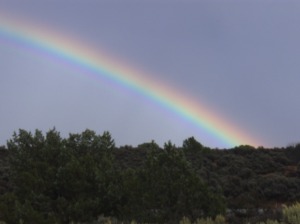 Being ever curious, we did a little drive about and checked out their campground and it was really nice. It is managed by BLM and they charge $10/night or $5/night with the federal pass. They had water and a restroom available, but no dump stations or hook ups. A number of sites had an “RV Only” sign on them and could handle at least a 30 foot camper. Several sites had excellent views of the mountains and canyons and several hiking trails took you straight from the campground to the ruin sites.

After a wet but enjoyable day, we finally pointed the car toward home… but that did not go as planned. We planned to make a big loop – out through the canyon then up to Hovenweep, back out onto Rte 10 and up and around to the highway for an easy return to Cortez.

The camp host had drawn the Utah roads onto the Colorado map but missed one turn. The signs for Hovenweep got us there but we did not realize that Hovenweep was on Rte 10. We thought we had turned off of Rte 10 onto an access road (road signs would be nice but we didn’t see any during hours of driving).

We retraced our steps to what we thought was Rte 10 and drove… and drove… and drove. Right when we thought we would be jumping onto the highway, we hit a “T” intersection where one direction was a semi-paved, semi-dirt road and the other was a well worn asphalt road. We knew we were not where we ought to be. We couldn’t get cell signal to check our navigation so we paused a few minutes to consider our options. It was at this point we remembered we had the not so trustworthy GPS with us (duh)… and discovered we were well into Utah and a good two hours from home. OOPS. Ah well, at least we had some adventures.

Storm clouds on our way home from Hovenweep

Due to the intense rains, the creeks along the road were raging torrents of muddy water and the run off from the high ground had washed mud and silt across the road in many places. John drove carefully and we only slid once in heavier mud where the road crossed the stream on a shallow bridge. As he slowed down to drive through the mud, I looked to my right and it appeared the muddy, rolling stream was ready to cross the road so we accelerated on out of there. Go Subaru! Much of the land we drove through after that was open range. We had to wait while the cows crossed the road, then farther along, we waited for the horses to do the same. We spotted a herd of sheep that were close to the road and stopped for a picture of them for our granddaughter. We were excited when we realized they were being watched over by a sheep herding dog. He trotted right over to check on his sheep and to check us out. 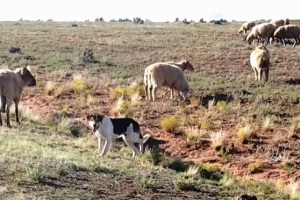 Sheepherder trying to move us into the flock

Apparently this particular sheep dog felt that our pausing made us part of his flock and when we started to move, he ran in front of the car and tried to herd us over with his sheep. After he blocked five or six of our attempts to drive forward he finally ran alongside and we could safely drive away with his barking ringing in our ears as he tried to catch up to us and bring us back to the flock.

After that we went back to driving for miles and miles through the great sage plain. It was amazing that you could drive along on what appeared to be flat lands without realizing how high up you were until the land just dropped away and the canyons and streams appeared hundreds of feet below you. One of the ironies of the day was that we wound up within 5 miles of “four corners” after all… and still skipped it.

This entry was posted in Hiking, National Park, Parks and tagged Utah. Bookmark the permalink.