We enjoyed our stop at Canyonlands but it hit us as being more of a draw for Off Highway Vehicles (OHV) and mountain bikers that want to cruise around on the primitive dirt roads. 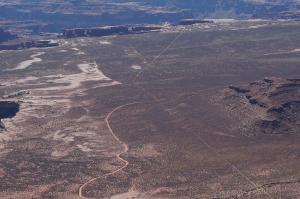 It’s also possible we were just rocked out and would have viewed it differently if it was the only canyon we’d hit but we’d already hiked and driven through many, many canyons.

That said, the views were still eye popping. 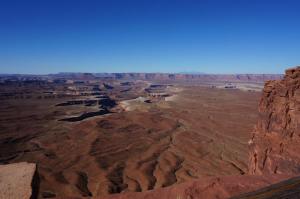 We went into the Island in the Sky area which is the most visited section of the park as it is the easiest to get to. (The other areas are The Needles and The Maze.)

We checked out the visitor center, drove all the paved roads in the park, took in the gorgeous canyon views and hiked to the first two overlooks on the Upheaval Dome. There are two theories about how the dome formed: either a meteorite struck the earth or a salt dome heaved up and then collapsed. 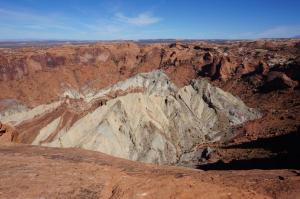 A good bit of this trail was across slickrock boulders. Sometimes there were footholds chipped into the rock, sometimes not. There were rock cairns to help guide you but the helpful people (John calls them Humorons) put up cairns for alternate routes… some that went right over the edge of the cliff. So nice of them. At one point there was a whole line of rocks to guide you along the safe portion of the boulder, except for that little space where even those rocks couldn’t hold on. It never bodes well when the rocks marking the trail slide off the side. Careful placement of the feet was definitely in order.

No matter where we hiked, shade was as rare as, well, water in a desert. 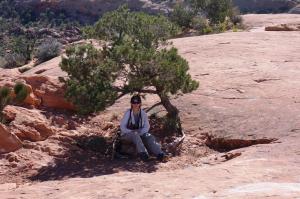 Holly resting in the shade

Some of the views made John’s imagination take flight. In this image the earth looks like it had been gripped by massive hands and torn as easily as we would tear a piece a paper. 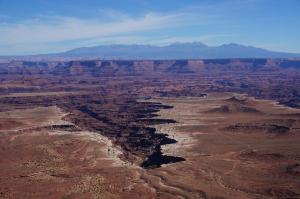 We attended a very good Ranger talk about the geology of the area and the teeny tiny portion of the geologic timeline that includes humans. He used a long rope with different colors to show the time frames and the itty bitty piece of tape on the end of the rope was for humans. We’re the thin layer of tattered, ratty looking piece of sticky tape gooing up the timeline of the planet. That sounds about right.

We did not camp in the park but did drive through their campground. It was small with no services except a pit toilet. I’m pretty sure they didn’t even have water. It WAS very close to the edge of the canyon so I’m sure they got awesome sunrise and sunset views.

The drive into the park is a long way from the highway through BLM land and there are campgrounds out there along the access road but we did not check them out. Dead Horse Point State Park is on a little finger of land that sticks right out into the canyon. It is probably the same distance to the state park as it is to the national park.

This entry was posted in Hiking, National Park, Parks and tagged Utah. Bookmark the permalink.