Back to the Coast

No more clown car rental. We are back to driving our Phoenix and it feels so good to be back on the road with her. We are both in high spirits as we roll out of Silverton in moderate fog.

We headed west on Hwy 20 and started seeing sun again as we crested the Pacific Coast Range. By the time we hit Newport, we had sunshine and fifty degrees and gorgeous ocean views. We returned to South Beach State Park and settled into site B-20 (B-19 was taken and we remembered that B-20 had been mostly dry the last time we were here – it IS storm season so we take little precautions). Side note – One of our booklets says that Highway 20 is the longest highway in the United States. It runs from the Oregon coast to Boston. From sea to shining sea! With a whole lot of America in between.

We set up camp, jumped in the car and headed back into Newport. First stop was more yummy chinese food at Lee’s Wok then on to Walmart to stock up. We threw away all those condiments that live in the refrigerator door and any uneaten food that required refrigeration before we left so other than dry goods, the cupboards were bare. Newport has a super Walmart but it was obviously converted from a regular, smaller, pre-existing store and selection was limited but we were able to get just about everything we needed. Next time we’ll curb our desire to get to the coast as quickly as possible and shop in one of the bigger cities along the way.

Once we got the cupboards and fridge all loaded up we started planning our play time.

Ahhh, it’s good to be back.

We wanted to see some of the other sights that Newport had to offer. So on a cool, cloudy, misty day we drove to Nye Beach and wandered around that district for several hours. NW Beach Drive loops down to a small parking lot near the beach, which is where we parked. An honor guard of sea gulls greeted us, although several appear to have deserted their posts. 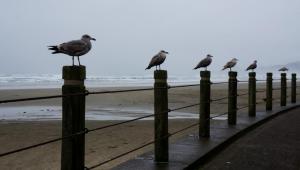 The district is fairly small but feels intimate with lots of small shops, restaurants, galleries and lodging. We didn’t eat there, but we did wander into quite a few galleries, many of which feature local artists. If I were an art collector – which I’m not – and had a place to display them – which I don’t – and had the money – which I really don’t – I’d definitely be tempted to buy some of the pieces I saw.

Bayfront, on the north side of Yaquina Bay, is a 5 minute drive from Nye Beach. This area is the home port of Newport’s fishing fleet. Across the bay we saw several NOAA research ships. 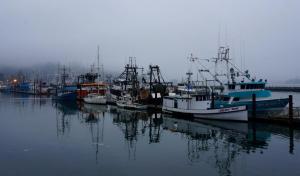 We unexpectedly came across a Wyland Whale Wall on the wall of the Depoe Bay Fish Company. Robert Wyland is renowned for his life size whale murals which can be found all across the US and in many countries, such as Canada, Japan, Australia and France. Click here to see other Wyland Whale Walls. 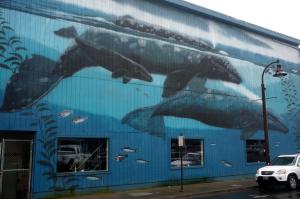 It’s no surprise to find sea lions lounging in the bay given that the Bayfront is lined with fish processing plants. I’m not sure if sea lions have a government, but this big fellow sure seemed to be on his soapbox campaigning for something. 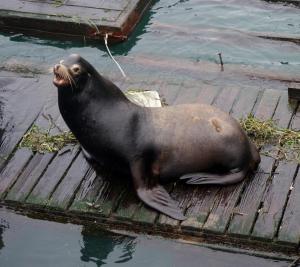 Seal lion on his soapbox

When we saw this next sea lion, we weren’t sure if he was alive or dead, until he poked his nose above the water, took a breath, and lay his head back under the water. He reminds me of our granddaughter Chloe’s dog, Chip, a 100 pound pit bull who loves to lie on his back and have his belly rubbed. I’m convinced Chip is part sea lion, except he doesn’t like to go out in the rain. 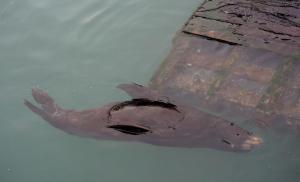 After meandering around the bay front and into and out of various shops, we decided it was time to get out of the cold and drizzle and eat lunch. We checked out the menus at a number of restaurants and settled on the Rogue Ales Public House on SW Bay Blvd. Our server was very friendly. Holly started with a Buena Vista Ferry, a yummy concoction of coffee, hazelnut spiced rum, orange zest, cinnamon, and whipped cream while I had one of the local Rogue Nation brews. Holly ordered her usual hamburger and fries while I asked for the pulled pork sliders and fries. Both meals were very good.