This is a beautiful park mostly nestled in the forest right near water’s edge. It is a short walk over one dune to a beautiful, soft sand beach. There isn’t much beach at high tide but the slope of the land quickly creates an incredibly wide beach as the tide goes out. The park has a very nice day use area, a hiker/biker campsite overlooking the water, rental cabins with an awesome view of the ocean and cape, yurts, nature trail, amphitheater, Junior Ranger hut and huge campground. 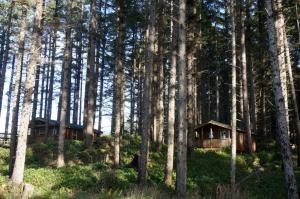 The following image looking north shows you all the great scenery surrounding the park. We took this photo at a pull-off between the day use entrance and the trailhead for North, South and Cape Trails. The campground is in the wooded area in the lower right quarter of the image. Netarts Spit stretches 5 miles toward Cape Meares in the middle distance. To the left of Cape Meares are what we called the Kissing Turtles, but are really known as the Three Arch Rocks. To the right of the spit is Netarts Bay. The towns of Netarts and Oceanside are on the far shore across from the spit. We visited and hiked our way all through this area. 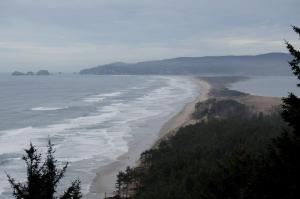 Only two loops were open but we had a beautiful full hook up spot in Loop C. The sites are well spaced for privacy, have paved driveways and all are a short walk to a very nice bathroom with separate, private shower rooms. 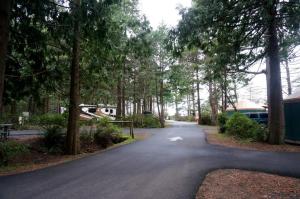 We could see the dune from our site but not the water. This is probably a good thing because high tide came almost up to the dune so if it wasn’t between us and the ocean, we would be getting wet. The camp hosts were friendly and helpful and campground was immaculately clean. The roads are paved and level so this is a great area to get out on your bicycle for some exercise. Bikes are not allowed on the trails but there are plenty of loops and roads that they can go on.

This campground is a great base for exploring the area. You have the rest of the Three Capes Scenic Loop, Tillamook, Oceanside, and Netarts close by. There are several National Wildlife Refuges, State Wildlife Areas, National Forest Service sites and State Parks within ten or fifteen miles. Kayakers were playing in the bay, surfers were playing south of the cape, hikers were wandering the gorgeous trails and fisherman were just basically in heaven. There are rivers, streams, estuaries, and bays everywhere you look. There were some old growth trees scattered here and there amidst younger trees. And there is the ocean. Several spots along the coast are known for whale watching… not that we saw any… again. I think we don’t sit still long enough to spot them. But we did see other people watching for them. Lots of shorebirds nest near here and sea lions haul up on the offshore rocks up and down the coast. If you aren’t a camper, there a tons of beach rentals all along here and the camp has those nice snug yurts and cabins.

John is definitely loving the coast. We started our beach walking within an hour of arrival. We walked and walked and walked and didn’t make it but maybe a third of the way down Netarts Spit. We did walk slow and stop often to watch the birds, the sky, the sea, but that wasn’t the only reason – that spit is looooong. Being curious people, and wondering just how far down the spit we made it, we climbed up a sandy spot to the top of the dune to look on the other side. We could see Netarts Bay just a short bit of sand away. There is a service road on that interior side of the dune so bikes should be able to make it part way down that side of the spit. That road would also be an awesome spot to set up for some excellent bird watching during migration. The bay is a favorite stopping spot for many birds.

We spent nine very enjoyable days exploring this area and would love to come back to do some more. Our hikes and day trips will follow in their own blog posts.