While the Hatfield Marine Science Center (HMSC) has a few kid-friendly exhibits (which are fun for grown ups too), it’s really more for adults interested in research being done in the area of marine science. The exhibits and research vary from the microscopic to the macroscopic.

Just outside the entrance is part of a dock that was torn from its moorings in Misawa, Japan during the March 2011 tsunami that hit Japan. The dock “landed” at Agate Beach north of Newport on June 5, 2012. Scientists were astounded to find 118 invasive species clinging to the dock. This piece of dock outside corresponds with two exhibits inside. One exhibit explains the dangers of invasive species, how many of them got here, and what you can do to help reduce the invasions. The other exhibit that references the dock deals with Tsunamis and ocean currents. The Tsunami exhibit has an area where you can build lego houses then test them out in the Tsunami wave tank. A boy of around ten or twelve was engrossed in his experiments on how to reduce damage caused by Tsunamis. 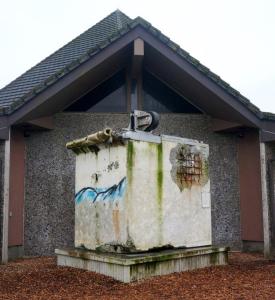 Part of dock from Misawa, Japan

Another outdoor/indoor exhibit described research being conducted on generating electricity from waves. The buoy shown below can generate electricity. The yellow disk rides up and down on the waves while the center post is stationery. How this all works was explained inside along with examples of several other type of wave energy devices.

John liked how the displays went beyond just the science and explained what’s involved in getting the science out of the lab and into the real world. It’s a complex process involving many stakeholders (government agencies (of course), commercial and recreational fishermen, developers, shippers, etc.), ecological considerations, wildlife considerations, and the like. It makes you realize that, no matter how beneficial something might be, making it a reality takes a lot of hard work and cooperation.

Another project involved monitoring undersea volcanoes. The Rumblometer shown below was actually trapped in the lava from an underwater volcano way out in the ocean… actually, not so way out in the ocean, but far below the surface where the tectonic plates are moving apart and the magma is flowing to the surface. They rescued this equipment and put it on display. You can see where the lava burned one edge of the device.

Holly’s favorite exhibit was the GPS unit. They have a whole display explaining GPS and showing how scientists use it to track the movement of the tectonic plates. The plate the west coast is sitting on is being pushed in and scrunched (creating the coast range of mountains as well as other land features) as another tectonic plate is pushed down beneath it. The two plates sort of snagged creating the drag. The display states that at some point that snag will let go and the top plate will bounce back… OK, so what happens to the mountains? They probably won’t just flatten back out. Besides the enormous earthquakes, how exactly does a tectontic plate rebound? We’re pretty sure we don’t want to be sitting in “bounce back” zone when that happens.

The center has a timeline on the floor that gives a great visual showing that the earth really is moving beneath our feet (just very very slowly). The plate tectonics are explained very well showing where the earthquakes, tsunamis and volcanoes come from. An interesting question they ask and answer is “Why are the volcanoes lined up in a row so far in from the coast?” The short answer deals with one tectonic plate being pushed under the other. The west coast of the United States is riding on that top plate. When the bottom plate reaches a certain depth, water is expelled from the rock and the conditions become right for the magma to rise to the surface. The plate dives at about the same rate all along its edge. The coastline parallels the edge of the plate so the line of volcanoes parallels both the coastline and the edge of the tectonic plate.

The center also has a theater that showed a movie about the search for sea “monsters”. We learned something about the pseudo-science of cryptozoology, the search for and study of animals that have not been proven to exist – such as the Loch Ness Monster. These scientists’ proof usually consisted of fuzzy photos and videos, drawings, and eyewitness accounts. Given that billions of cell phones are out there, John’s surprised that there aren’t lots more images of these sea monsters. After watching the movie, neither one of us was convinced of the existence of these sea monsters. However we think there are lots of undiscovered species out there. Given the vastness of the oceans, why would we think we’d found everything there is to find?

This is gorgeous country and we still think we want to live out here but there are a lot of natural disasters just waiting to get you. It makes you think.