Copper Mining in the Keweenaw Peninsula

There’s so much history in the Keweenaw Peninsula that I don’t know where to begin, or end.

So let’s start with where is the Keweenaw Peninsula?

It’s on the western end of Michigan’s Upper Peninsula (UP) and juts up into Lake Superior.

Native Americans collected mass copper scattered along the surface of the Keweenaw Peninsula and dug it from shallow pit mines. The beads, tools, and ornaments made here were traded to places as far away as Effigy Mounds in Iowa and Hopewell Mounds in Ohio. (We’ve visited both those sites, more on them in other posts.)

French, British, and American explorers knew copper existed here. The exploration and mining of Keweenaw copper began in earnest in the 1840s. Over time, geologists discovered, and mining companies developed, a long seam of copper that ran down the center of the entire peninsula.

The Keweenaw mining industry grew and the region was world-renowned for its prolific copper production. Thus the population of the peninsula grew, attracting English, Cornish, Irish, Scottish, German, Austrian, Polish, Italian, Norwegian, and Finnish immigrants. By the start of the American Civil War in 1861, Michigan accounted for almost 90% of all copper produced in the United States. After the Civil War, rapid industrialization caused American factories to demand more and more copper. The copper industry boomed throughout the United States. On the Keweenaw Peninsula, about 400 mining companies operated between 1872 and 1920. The town of Calumet, once known as Red Jacket, was the creation of the Calumet & Hecla Mining Company (C&H). As far as mining companies go, it was the top dog in the Keweenaw. The Quincy Mining Company wasn’t too far behind. Mining companies, employee housing, and support services covered the peninsula. Then it crashed. Copper was being produced more cheaply in other areas with open pit mines, foreign competition, etc. The mines reduced operations, continued to lose money, and eventually shut down one by one.

The main industry of the Keweenaw Peninsula is now tourism. It is a beautiful, lush point of land with steep ridges and rocky shores. It is steeped in the history of the massive copper mines and the immigrant miners. The peninsula is criss-crossed with roads and recreational trails to draw the curious traveler. It is a playground for the avid outdoorsman offering hiking, boating, fishing, mountain biking and ATV’s during the warmer months and skiing, snowshoeing, and snowmobiling in the winter months. Seeing as how we are “persons of a certain age,” we did the slower, historic tourism part of the peninsula (we would probably hurt ourselves with that other stuff).

We started with the Keweenaw National Historical Park which is headquartered in Calumet. They have a very nice museum and bookstore. The park staff was very friendly and, as we returned often so our granddaughter Chloe could get yet another Junior Ranger badge, they came to know us on sight. The actual NPS managed area is small and at first we were a bit confused as the historic preservation is being done by many different organizations that are working together to save the sites and memories of the Historic Keweenaw.

The Coppertown Mining Museum is also in Calumet. It has an eclectic collection of items and displays. I found their pattern making exhibit interesting. Because of their remote location, the mining companies had to be able to manufacture replacements for any machine parts that broke. They worked on strict schedules and could not afford to have lengthy downtimes waiting for parts to come in. 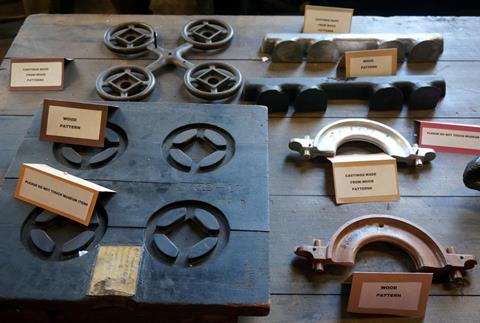 The Calumet Historical Society, housed in a beautiful old building constructed of poor rock, is very close to the visitor center. Poor rock is basically the rejected rock that was “poor” in copper. Several of the old buildings used this amazing stonework. 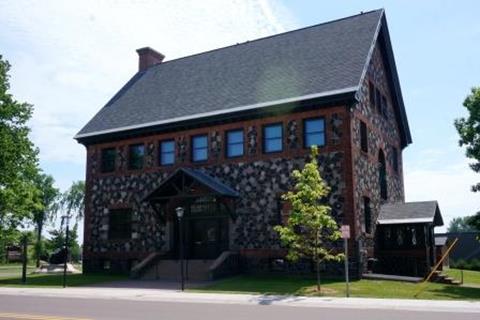 We picked up a brochure at the NPS Visitor Center and took a walking tour of the town of Calumet. We saw quite a few buildings that were in existence back when the copper was king. Sadly, many of them are very rundown or unoccupied. The National Park Service is attempting to help the town restore itself to something resembling its old glory and to preserve the history that is found here. 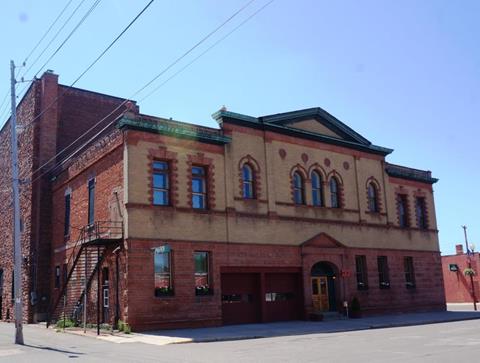 The Quincy Mine covered miles of ground with miles of railroad tracks connecting the different processing locations. The Shaft-Rockhouse at the Quincy Mine (see Quincy Mine Tour posting), sits on the top of the slope, dominates the skyline, and can be seen from miles away. But down the slope, closer to the town of Hancock, is the old Quincy Smelter. An organization is attempting to restore the site but have a very long way to go. We took a tour with a very knowledgeable guide and saw the massive furnaces and tools that were used. We could trace the path of the ore by following the rail tracks that run through the buildings. We could imagine the flames, the heat, and the noise.

All these sites when woven together have a story to tell to those who are willing to listen. You can see the buildings and machines. You can hear and read the stories. You can look at those smokestacks and winches and rock piles and imagine what life was like so long ago. We hope that the coordinated efforts of these groups are successful in preserving this area so they can continue to tell the story of the Copper Peninsula.