The Quincy Mine Hoist Association maintains the buildings and grounds of Quincy’s No. 2 mine and conducts guided tours of the hoist house and the 7th level of the mine.

The historic No. 2 Quincy Shaft-Rockhouse was built for the Quincy Mining Company’s deepest mine. The mine extended 9,260 feet at a 55 degree decline and reached a depth of 6,225 feet below the Earth’s surface.

The shaft followed the angle of the copper lode. About every 100 feet, horizontal shafts, called drifts, were tunneled parallel to the copper lode. Miners then drilled holes in the walls, placed charges in the holes, and blasted the solid rock into manageable pieces, moving continuously outward and upward until the copper-bearing rock gave out.

The mines were dark, damp, dangerous places to work. 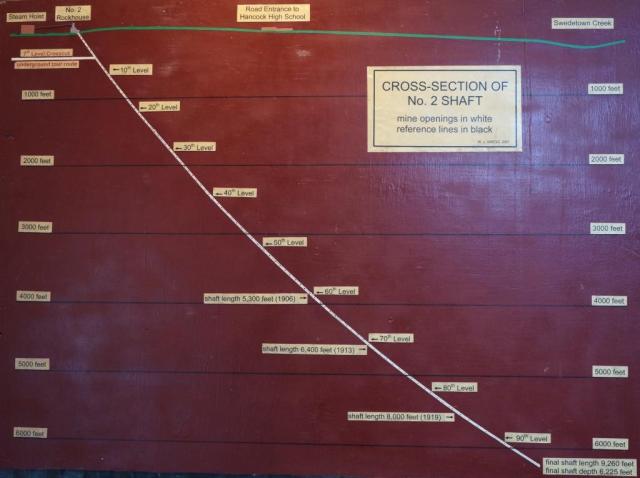 Before starting the tour, you have to dress the part of a miner – hard hat and heavy coat. I left out a few things the miners needed in the mine – candles for light, boots, and lunch, usually a pasty, a Cornish pastry filled with meat, potatoes, rhubarb, onions, carrots, etc.

Mine visitors ride to the mine entrance (or adit) on the Quincy & Torch Lake Cog Railway. 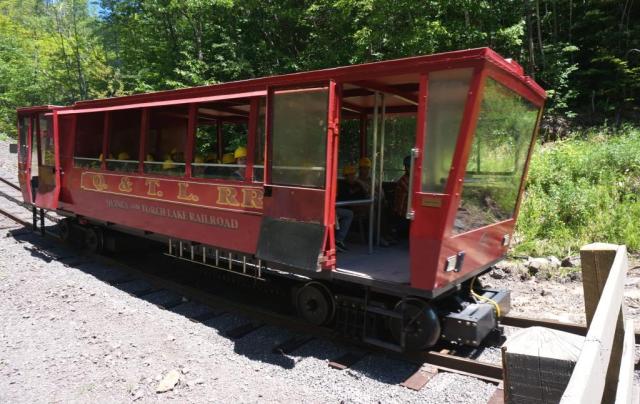 The ride to the mine was loud, steep, and bumpy. But the view was awesome, even if I did have to peek around the side of our driver’s head. The lift bridge over Portage Lake is in the middle distance. The town of Houghton is on the other opposite side of Portage Lake. 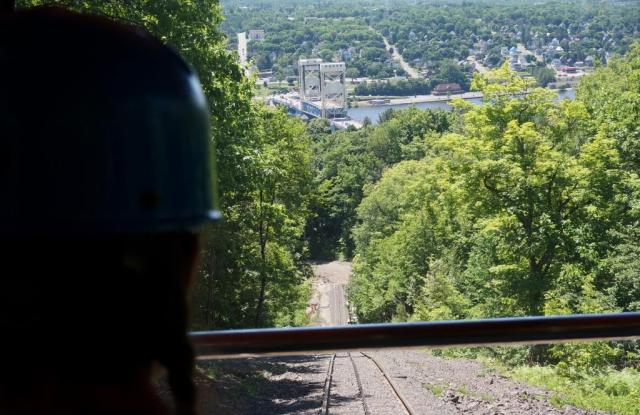 At the bottom of the hill, we hopped off the rail car and got on a wheeled trolley, which took us through the adit and into the mine. The adit is just ahead in the photo. It doesn’t look very inviting. 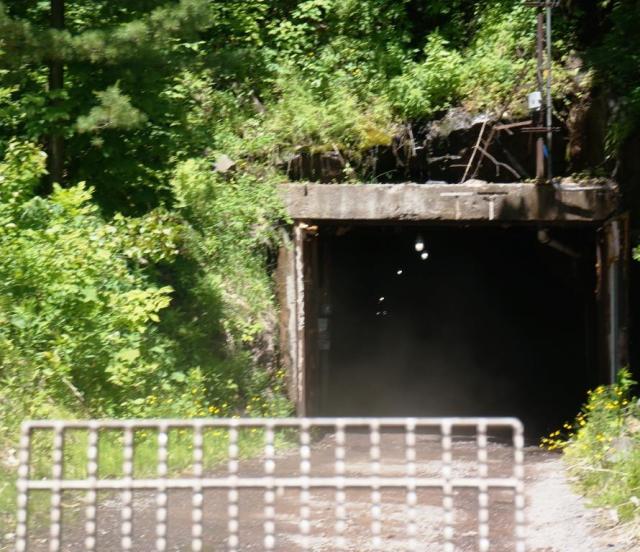 Once in the mine, it got damp and dark, fast. But compared to what 19th century miners encountered, this mine was lit up like a Christmas tree. The number to the left (300’) showed how far into the mine we had traveled. 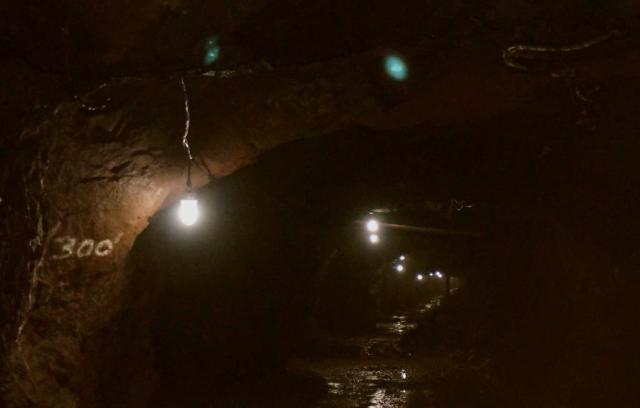 We unloaded at about the 1000 foot mark and our guide led us down some steps, which the miners wouldn’t have had, and into what appeared to be a large cavern. This was a stope. Here’s where miners followed the lode. They drilled into the rock walls, placed explosive charges, and blew the wall into manageable size rocks. Miners in the mid-1800s used manual drills, one miner holing the drill, another miner pounding it with a sledge hammer. Then two-man drills powered by compressed air came along. These were followed by one-man drills (shown in the picture). 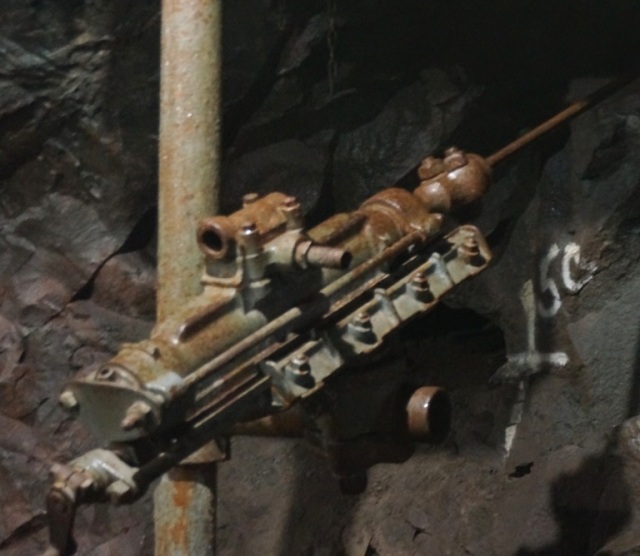 Once the rock was broken, trammers went to work, separating copper-bearing rock from poor rock, and loading the rock into tram cars. (Poor rock contained too little copper to warrant further processing but nonetheless had to be hauled to the surface for disposal.) The trammers pushed the tram cars along a rail to a collection point. I saw a photo of a trammer preparing to push his fully loaded tram. He was sweating, his face smeared with dirt, he appeared near exhaustion, his eyes expressed hopelessness. I regret not capturing that haunting image. 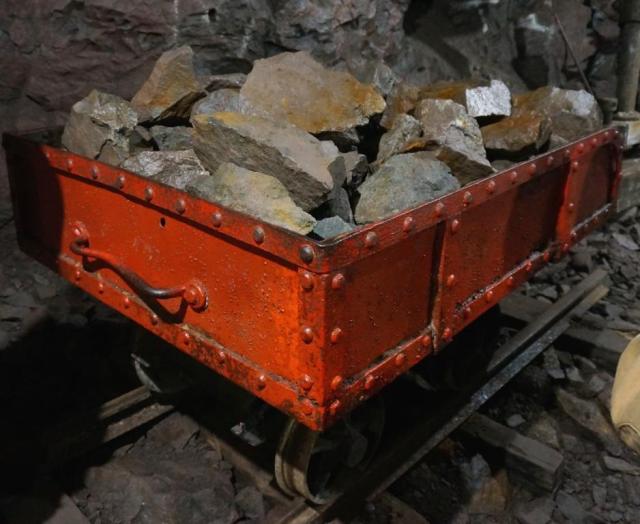 At the collection point, the rock was loaded into skips, which could hold up to 8 tons of rock. A hoist hauled the skips up the shaft to the shaft-rockhouse. 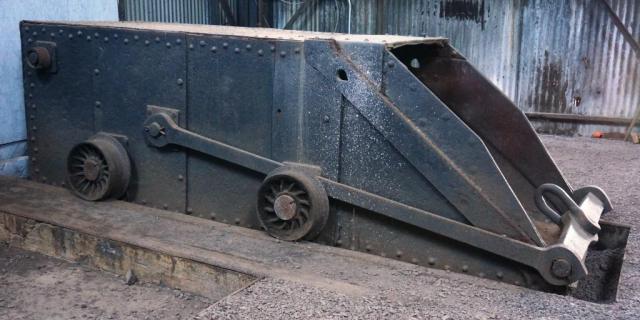 Once on the surface, the first facility rock went through was a shaft-rockhouse. This structure covered the underground shaft entrance and above-ground it was the rock-processing center. The shaft-rockhouse allowed rock to be processed as soon as it was brought up from the mine. At a shaft-rockhouse, three men could move about 1,000 tons of rock in 12 hours. 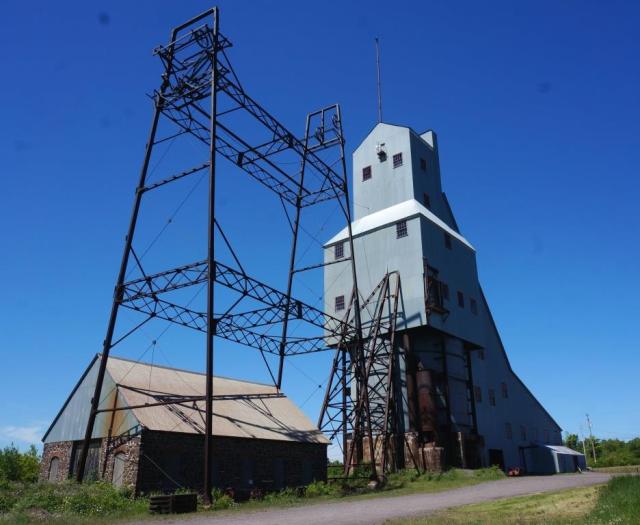 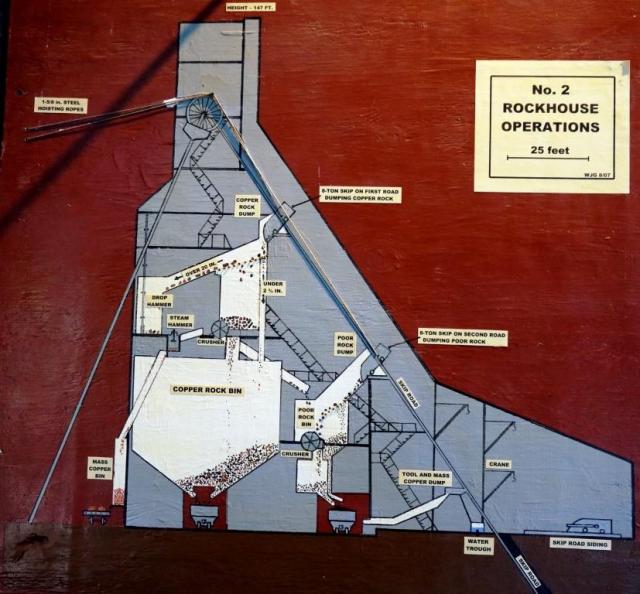 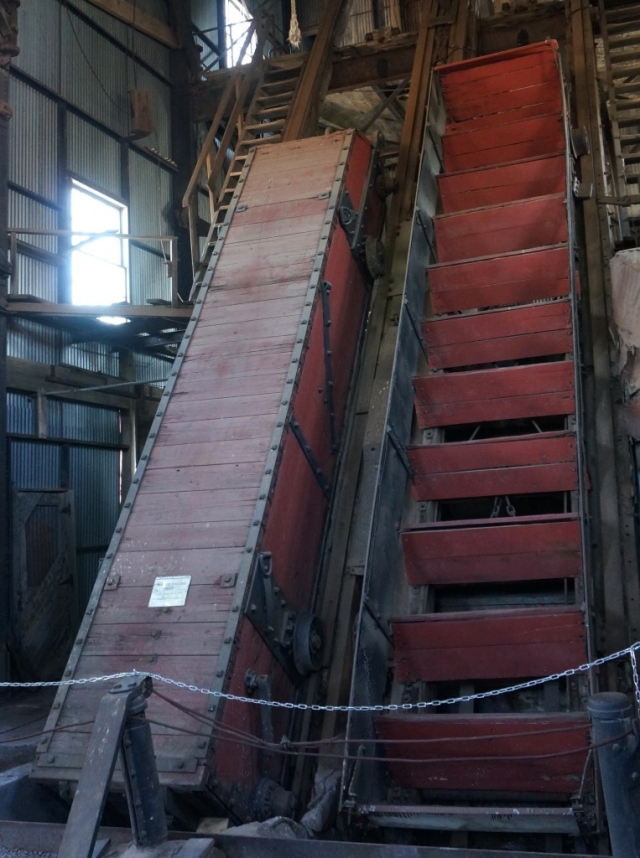 The No. 2 Hoist House 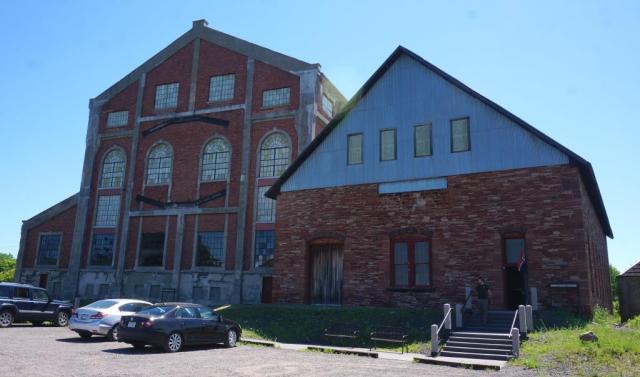 One of the two hoisting mechanisms is shown in the picture. Our tour guide gives you a sense of the size of this equipment. The hoisting drum was driven by two steam pistons – one high pressure and one low pressure. I think the one in the picture is the high pressure piston. It’s connected to the hoisting drum. The hoist operator sits on a raised platform and raises and lowers the hoist based on a series of blinking lights. 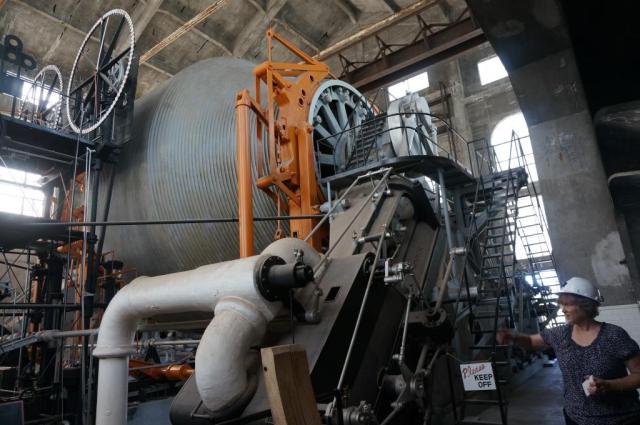 The drum is grooved so the cable neatly wraps around the drum. When it really gets going it can move more than 3,000 feet per minute. 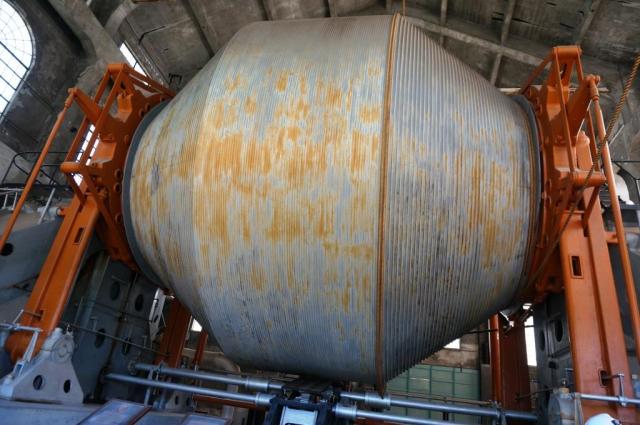 For some reason, the hoist operator’s station reminds me of the Wizard of Oz. I can almost see Oz behind the curtain pulling levers and making a racket.

The spoked wheel tells the operator where the hoist is. 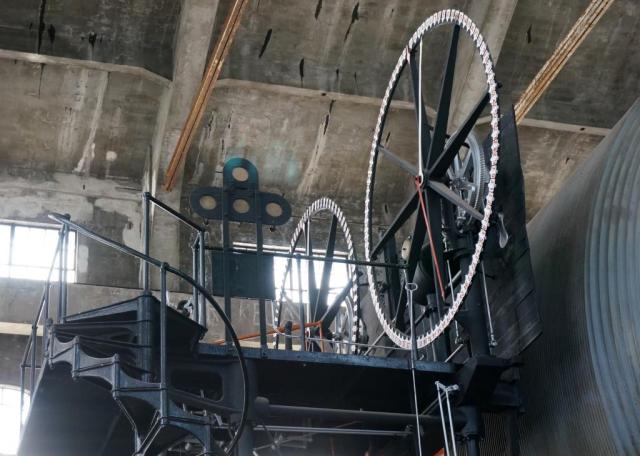 Our final stop was a self-guided tour of a miner’s house. Of those who worked underground, miners were the top dogs (if you don’t count foremen, managers, and supervisors). So they got better accommodations than other underground workers. 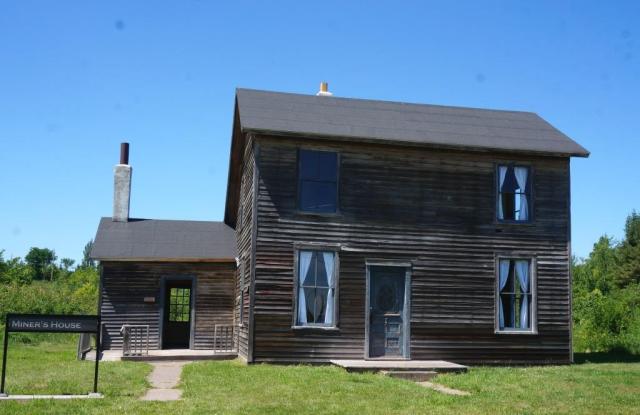 Joseph Martin was hired as laborer in 1886, and moved into this house in 1913 with his wife, Elizabeth, and nine(!) children. It would have been a wee bit crowded.

A coal-burning stove cooked the food, provided hot water, and heated the home. Elizabeth would have spent most of her day in the kitchen – bathing children, doing laundry, and cooking meals.

Joseph worked long hours and spent little time in house. During his 35-year career he was away from work only twice: once for “good time” (whatever that means) and another after fracturing his skull in a mining accident.

I can imagine the parlor being quite a rambunctious place, what with nine kids all getting into mischief. 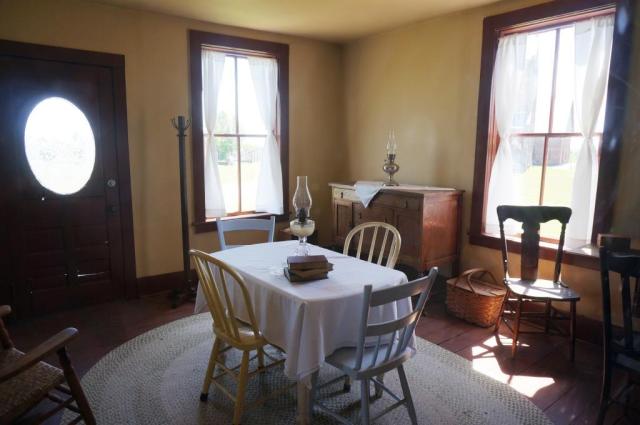 This entry was posted in History, Museums, Walking Tours and tagged Michigan. Bookmark the permalink.