We headed out to the pretty little town of Bayfield where the main National Park Visitor Center for the Apostle Islands National Lakeshore is located. It is housed in a beautiful old courthouse and has a movie about the park, a few displays and a gift shop. This is also their main base for issuing permits for back country camping and paddling on and around the islands. 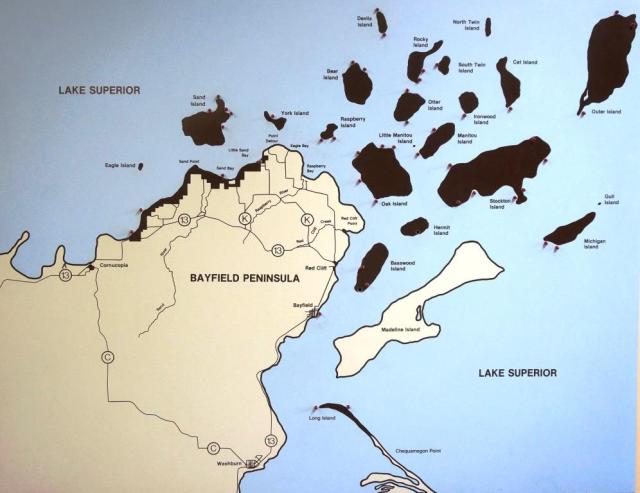 A thin strip of land on the northwest edge of the peninsula is part of the park but the rest of the park consists of islands, so visiting the Apostle Islands pretty much means you need a boat. Luckily there is a charter company in Bayfield, Apostle Island Cruises, that has several tours a day. It was difficult to choose between sea caves, shipwrecks, or the three hour grand tour. Side note: why are they always 3 hour tours? Don’t they realize it makes all us “persons of a certain age” start running the Gilligan’s Island theme song through our heads? And not in a good way.

But back to choosing a tour. Chloe and I narrowed it down to shipwrecks or grand tour then finally picked grand tour at sunset on their new high speed boat (So now it’s only 2-2.5 hour tour… No Gilligan for us!) Once we checked in and got our tickets we wandered off to find dinner and explore the town. The clerk told us we could bring food and beverage on the boat (including alcohol on the sunset cruise) but we opted for hot pizza in town before boarding. There are quite a few gift shops and art studios in town as well as several places to eat so it was fun just wandering.

There is one island where you can bring your car, Madeline Island. But it’s not part of the park. We watched the Madeline Island Ferry start its journey to that island.

John was curious about one boat, the Shenenon (T-465), at the pier. So he took some pictures and, being the geek he is, did some research. It’s a converted tug-transport (hence the T designation) built in 1953. It’s now part of a fleet operated by the National Oceanic and Atmospheric Administration (NOAA) Great Lakes Environmental Research Laboratory. Nothing spooky-ish about that. At least it wasn’t a black boat.

Chloe REALLY wanted to be up front on top of the boat so we wandered down to the pier extra early (so early we got a sunburn and a prize for being first in line). We kept looking at the boats trying to figure out which one was ours but none looked new or high speed so we figured it was out on a tour. It wasn’t until we were on the boat that they told us their high speed boats were on order but delayed. If you’re following the joke you realize our brains immediately locked onto the important point in that information… we were about to depart on a three hour tour!

It was a good tour, though a bit long, and we all did make it back safely. The guide told us about the different islands and wove the stories together to give us an idea of the history of the islands as the different peoples and animals came through. 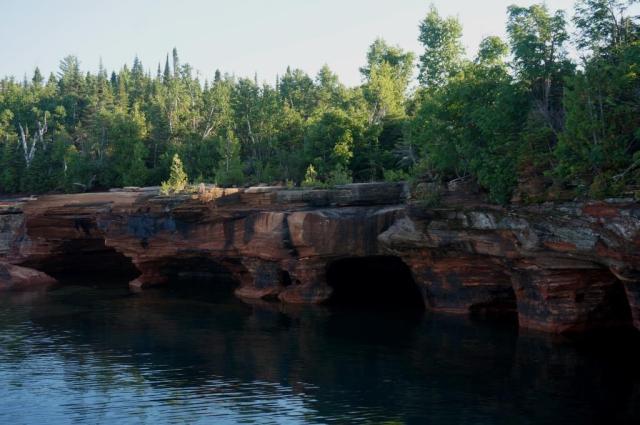 Sunset over the Apostle Islands

and Canada. Yep, once again we were very close to the Canadian border. We also came close to one of the ship wrecks but not quite close enough to see anything, darn!

Sailing back into the harbor, the bucolic town of Bayfield sand to us for we heard music echoeing from a band playing in the town’s gazebo. 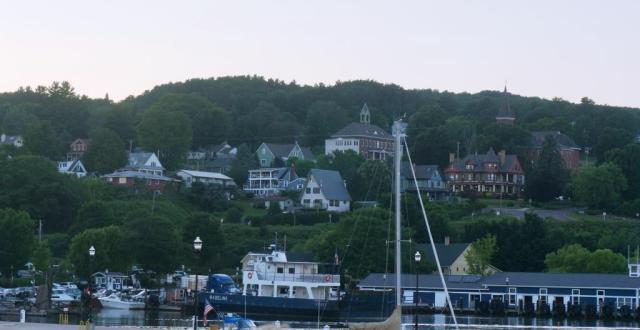 The charter company also runs shuttles out to certain islands to drop off and pick up people that are hiking, camping, kayaking or just touring for the day. Our  cruise gave us a good overview of the islands but I felt that we missed out. I hope to go back someday and get off the boat to walk on the trails and feel the woods, the lake and the solitude that awaits those that seek it.

This entry was posted in Boat tour, National Park and tagged Wisconsin. Bookmark the permalink.