The original Vermilionville was named for the Vermilion that grew wild in this area. It was the first town built by the Acadians when they relocated here. The town was later renamed Lafayette. The Vermilionville that we toured was a recreated village along the Bayou Vermilion. It is a beautiful village with full grown trees and walkways. Their flyer calls you to “Explore the living history of the Acadian, Native American and Creole cultures.” They have historic homes, gardens, a church, blacksmith cabin and more. Many of the homes or areas have living historians explaining life during those time periods (1765-1890). They have live music every Saturday and Sunday and there is a restaurant on site.

One building was named “Cooking School” and we could see a demonstration kitchen inside but there was no other information about it. I couldn’t find anything when I went online after our visit either. When you do a Google search for Vermilionville Cooking School, you get links to their events page which shows lots of concerts at their performance center but nothing on the cooking school. HOWEVER, I found a downloadable walking tour that explained a lot of the village that we had wandered through. They didn’t give that to us when we were there. I can tell by looking at it that a few things have changed but it would be good to look over it to see if the village is of interest to you and possibly print to take with you to use for those buildings and plants that are the same.

The houses are open and furnished so you can walk through them. Many have interpretive signs and if there is a reenactor there, they are happy to tell you about the building and answer questions. The blacksmith was actively working and teaching the crowd.

The nod to the Native American history is simply the “Common Ground” structure. No signs, no information, just the structure. It looks like a living history person may work there sometimes and maybe they do some ceremonies but it was just a nice structure when we were there.

The first building we went into was the watershed exhibit. This exhibit was only tangentially related to the rest of the village. Still I found it very informative.

The first village building we encountered was la Maison des Cultures, an Acadian-styled house that was built in the 1840s. It used colombage (a half-timber wall framing system) and bousillage (a mixture of mud and Spanish moss). An exterior staircase, common in these houses, led to a garçonnière where older boys slept. 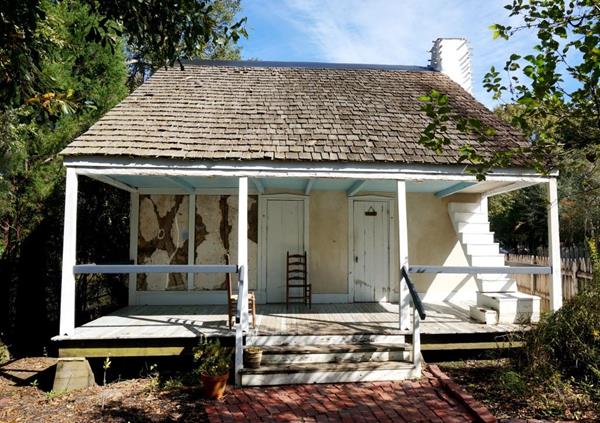 Inside were three rooms with exhibits. The first room traced the history of the southwest Louisiana native population focusing on Ishak, Chitimacha, Houma, and Avogel tribes. The second room focuses on the Acadians, from the settlement of Acadia (eastern Canada), their subsequent expulsion, and resettlement in this area. The third room explores the Creole culture.

As we wandered the grounds we encountered signs labeled “Fun Facts”. For example: Where did the word “Cajun” come from? Refugees from Acadian Canada called themselves Acadians. Over time the word transformed into Cajun. You can “become” a Cajun if you marry into a Cajun family or are welcomed as a “cultural” Cajun.

Creoles are also identified by their ancestry, a combination of French, African, Native American, and Spanish. However anyone can become a Creole by adopting the Creole heritage.

We passed a boat shed with a very unique looking boat in it. This is a French l’esquif (skiff). It’s a flat-bottomed boat with a sharp bow and square stern. What made this distinct was that the oarlocks were elevated and extended past the sides of the boat. This made it easier for the rower to stand and face forward. 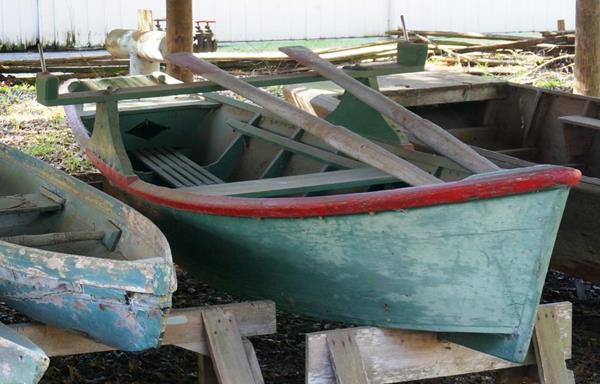 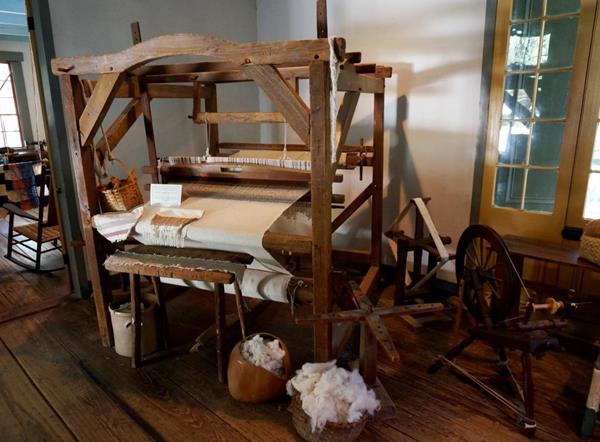 We went into a typical schoolhouse. In southwest Louisiana, French was the dominant language until the mid-1900s. Locals and immigrants alike learned French which was the language people used to conduct business and to socialize. John took French when he was in junior high school and high school in the mid-1960s. (Yes, he’s that old!) He was surprised to learn that in the 1910s new laws banned the French language in schools in an attempt to Americanize the non-English speaking population.

Maison Mouton, a middle class family dwelling, was used to showcase Cajun woodworking and tinsmithing. Woodworking demonstrations take place here, although there were no demonstrations when we were here.

Kitchens were typically in separate buildings to reduce the chance that the main house would burn down if the kitchen caught fire. Kitchens usually included an open hearth with swing-arms to hold pots over the fire. Cast iron pots were used as Dutch ovens.

Southwest Louisiana cuisine blends French, African, Spanish, and Native American traditions. Gumbo is a perfect example. This thick soup is prepared by cooking a roux (dark gravy) and then sautéing bell peppers, onions, celery, and garlic in the French manner. The addition of okra is an African influence. The word gumbo is derived from the African Bantu word for okra, ki ngombo. The addition of spices and hot peppers was inspired by Native American, African, and Spanish tastes. Using filé (ground sassafras leaves) to thicken and flavor the gumbo is inspired by Native Americans. So everyone gets a chance to put their hands in the pot.

The Buller house represents the Creole building style. This style features a steep-pitched hipped roof and a large front porch. The home has no hallways and centers around a large room flanked by smaller bedrooms. In contrast, a Cajun home usually has roof with a gable end and exterior stairs leading to an attic living space. Wide rear porches, called loggia, separate two rooms, called cabinets. Those rooms have openings on three sides to allow for cross ventilation.

The village erected a ceremonial space to honor the indigenous peoples that lived in this area. The Native Americans have managed to maintain their tribal identities despite the influx of non-native peoples to the region.

This entry was posted in History, Parks, Walking Tours. Bookmark the permalink.