THIS is where you find out what all this Acadian, Cajun, and Evangeline stuff is. It is ALL OVER this area. Roads, buildings, billboards, company names… you name it, it has Cajun, Acadian or Evangeline on it. To make sense of it all we headed over to the Acadian Culture Center. This is one of six parcels that make up the Jean Lafitte National Historic Park and Preserve. We plan to hit one or two other sections of this park when we roll into New Orleans.

The park visitor center has a good movie (a little over the top with the drama but not bad). It tells the story of the Acadians. You want to watch this FIRST. Then they have a museum area with a really nice timeline so you can better visualize when everything happened. Example: The Acadians were there in what is now Nova Scotia with their communities fully established long before the pilgrims ever got off the boat at Plymouth Rock. The exhibits were well done with clear information as to what you are looking at. They also had numerous panels of just pictures of Acadians hunting, dancing, cooking, working, gathering, and so on. It tells the history but is also a celebration of the people. 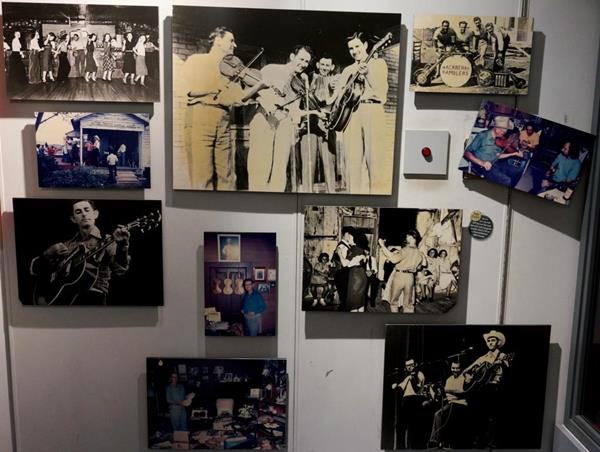 Cajuns and their music

I saw on their calendar that they have boat tours on Bayou Vermilion but you have to book them two weeks in advance so keep that in mind if you are planning a trip here. I saw a rack of canoes by the Bayou so they must do other trips as well. I wish we had stopped at this visitor center before we went to Vermilionville. I think it would have added to and clarified what we learned there. I had not made the critical connection between Acadian and Cajun. To help you out, I’ve put together a mini primer:

Acadia – Mostly French immigrants settled in what is now Nova Scotia. They named it Acadia.

Acadians – Those same immigrants. They eventually developed their own culture somewhat different from France and had a fully developed colony. English colonists attacked the French fort that supported the colony, won the battle, and claimed the land for England. Then they demanded the Acadians swear allegiance to England and to fight against the French. They said “Non!” so the English forcibly exiled the Acadians and worked to exterminate them. They were split up and loaded onto boats with only what they could carry. Then the English burned their homes to make sure they didn’t go back. Some escaped into the woods but many of those were hunted down and killed. This became known as the Grand Dérangement. Over time, and after many severe trials and loss of life, a large number of exiled Acadians settled in Louisiana. Southern Louisiana became the new Acadia.

Cajun – Start with the word Acadian… simplify it to ‘Cadian… and slur it a bit to get Cajun. Cajun is Acadian. Cajun culture evolved as the Acadians dealt with different foods, different ways of doing things in the new land and the merging of things they learned from the locals – Native Americans, African Americans, Spanish, and other groups that came through.

Evangeline – A mythical Acadian woman from Longfellow’s epic poem of same name. The story is that Longfellow heard about the inhumane treatment of the Acadians and the rumor that there was a young, newly betrothed woman that became separated from her fiancé when they were exiled, so she spent her life searching for him, but moments after they were reunited, he died in her arms. That’s a run on sentence, but it is a long poem. From this rumor/myth/possibly true or partially true story, Longfellow researched what he could and wove a poem telling the story of the Acadians. Many were separated from their loved ones and wandered the country searching for them. Many searched for a new homeland. Many died. I recommend reading the poem before touring the area. You can download an electronic version of Evangeline for free from Amazon or Project Gutenberg. It seems to me that Evangeline represents all the Acadians, but I could be wrong. I have additional confusion on Evangeline. Some say there was a real couple that Evangeline was based on and that they united and settled here in southern Louisiana (near Lafayette) and one sign showed descendants… which is tricky if you were old and grey when you were reunited and one of you died within minutes. There is even a tree where they say the lovers met. I know the poem may be based on a real couple and it could be a whole lot of poetic license on what happened but I’m not convinced all this Evangeline stuff is real. The Acadians and their Cajun culture – now THAT’s real.

The culture center had index card size Fun Facts that John liked. For example, the rice grown in the United States did not come from China but from Madagascar. Rice “landed” in Charleston, South Carolina in 1685 when a brigantine sailing ship sailed into the port for repairs. The captain gave a local resident a sample of seed rice. He, in turn, distributed the seed among his friends. That seed became known as “Carolina Gold Rice”.

They had nice models of first, second, and third generation homes. 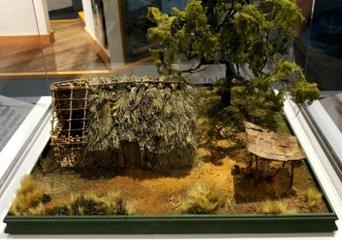 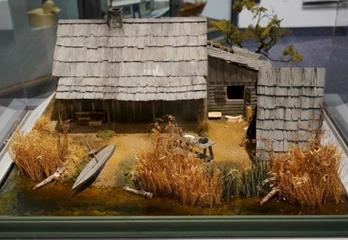 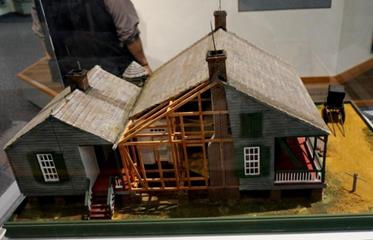 Acadians love their music. One display had quite a few musical instruments, many homemade, on display. Note the banjo made from an old cigar box and the upside down washtub. 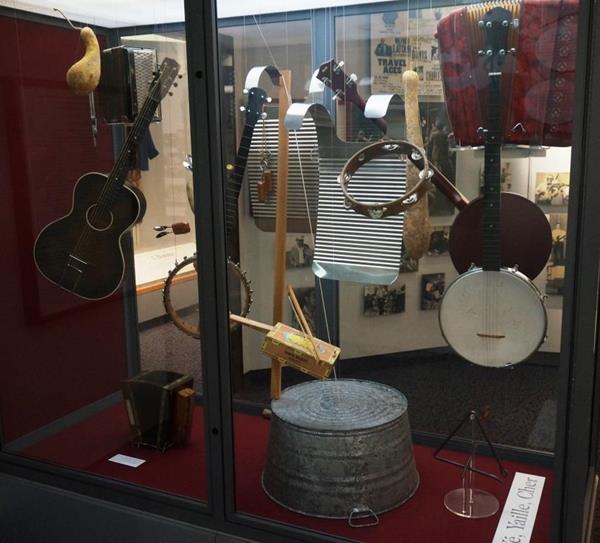 Another fun fact: Mardi Gras did not start in New Orleans. The first Mardi Gras in America took place in what is now Mobile, Alabama in 1703. New Orleans wasn’t founded until 1718. Go ahead and stump your friends. Better yet, bet your friends for money or beer. You’re a sure winner! 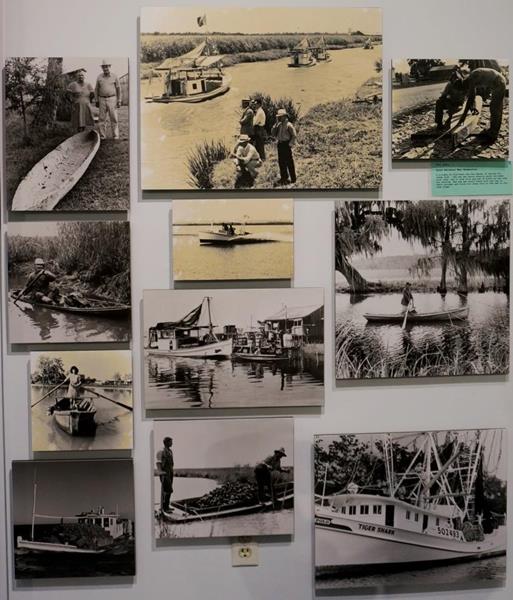 The folks at the Convention and Visitor center in Lafayette can help you find things that match your dining and touring tastes. We stopped in several times. The last time we told them we were hungry, we didn’t like seafood, we’re hoping to find good crispy Boudin Balls and we’re (always) dressed casually. They jumped right on it and started rattling off options and marking up a map. That led us to Bon Temps Grill, Billy’s and a recommendation for Blue Dog Café that we did not make it to. Darn… Will somebody please go eat and tell us what we missed!

John and I seem destined to eat our way through Louisiana (even with our aversion to sea food). After touring the Acadian Culture Center we planned to eat at Prejean’s which is supposed to be “THE” local Cajun restaurant. But when we pulled up the lunch menu, it was almost all seafood so now we were hungry in Lafayette and no clue on our options. What to do? We headed to the visitor center and hit them with that long list of wants.

We then headed to Bon Temps Grill in Lafayette for excellent Chicken and Andouille Gumbo, Cajun Jerk Chicken over Sage Sweet Potato Mash (sounds weird but very good), Blackened Chicken Pasta with sweet tomato cream sauce, and a strange but good carrot cake… with cream cheese ice cream. Niiiice. We were stuffed and still had half of our dinner in to-go boxes for later so we just looked at exit 97 as we went by and mentally told Billy’s that we’ll stop in later.

My patience didn’t last long and I was determined so the next day we hit Billy’s just off Interstate 10 in Scott, LA for awesome Cajun Boudin Balls (boo-dan). They are crispy on the outside and spicy on the inside and OH SO GOOD! We’re going back. (NEWS FLASH: We did go back!) We hope to be able to cart some of that goodness to Maryland for Christmas. (We bought six pounds of Boudin sausage so at least one link should make it to Maryland. Maybe…) To give you a hint of how popular Billy’s is, the first time we stopped there were over 60 people in line. It totally wrapped the inside of the store and then overlapped itself. There were at least 20 cars wrapped around the building in the take out line. It was astounding! John and I like to find the places the locals like and we hit it this time. John walked in the door, looked at the line and the food being sold, smiled and said “Jackpot!” I don’t know how long we waited but it was amazing how calm everyone was. They all knew they were about to get really good Cajun food. They stood in line, waited, waited, waited then ordered, paid and rolled out the door with big smiles on their faces as they took their bounty home.

We have fallen in love with Cajun food. NOT the overly spicy stuff they call Cajun elsewhere but REAL Cajun – layers of flavor, nicely spiced, a little heat that shifts and changes with each bite. If we ate seafood, we’d be in foodie heaven and find it hard to leave. As it is, I’ve already bought three Cajun cookbooks for my e-reader so we can start learning to cook Cajun for ourselves. So what do we make first? Boudin or Gumbo?

We spent a week at the Frog City RV Park. It’s just off Interstate 10 at exit 92 about 20-30 minutes from downtown Lafayette. It’s close to the interstate so there will be road noise. We seemed to get used to it pretty quick though.

They have 62 full hookup pull-through and back-in sites. The sites are level and easy to get into. They also have cable and very good Wi-Fi. The Wi-Fi is password protected. We don’t know how good the cable is – quality or channel wise – because we don’t watch TV and never hooked it up.

The staff was terrific. While we were checking in the manager told us that they were hosting a free Thanksgiving dinner for the campers and asked if we wanted to attend. Heck yeah! She said they’ve been doing it every year for a long time. While not required, we brought a side dish, John’s (semi) famous cranberry sauce extraordinaire and some spiked egg nog. Is there any other kind? The dinner and company were awesome. We only wished we could have stayed longer to chat with the hosts and guests.

They will let also you wash your rig for $10. We suppose that’s for the extra water usage. Both the rig and toad had been dragged through the muck and mud and were in dire need of a good cleaning so we paid up. John did the washing part.

They also have coin-operated laundry facilities which we took advantage of. It costs $2 for a washer and $2 for a dryer. Unlike a laundromat, the dryer kept going until the clothes were actually dry. They also have five or six private entrance bathrooms with showers. The laundry and bathrooms are always locked but they give you the code when you arrive.

If you are visiting or passing through the area and want a place to stay we highly recommend Frog City RV Park.