The World War II Museum is one of the best museums I have visited. There is so much to see, hear, and do that one day would never be enough. In fact I spent four full days, opening to closing, and barely finished.

We camped at Bayou Segnette State Park in Westwego, an easy drive to the museum. So easy I drove there and back on my own without getting lost! We parked in the museum’s parking garage. Parking fees are a bit steep; if you stay all day it will cost you $18. Still, given the cost of other parking options, that’s really not too bad.

The museum covers everything that had to do with the American war effort, and I mean everything. There are five buildings on their “campus,” several restaurants, and multiple gift shops.

I suggest starting at the Louisiana Memorial Pavilion to purchase your tickets. Then you can pick and choose where you want to go and what you want to see. Volunteer greeters are everywhere. Don’t be afraid to ask them questions or for directions. They are very friendly and helpful, and will get you where you want to go.

We ended up buying the Friend and One annual pass, but not until after we purchased our daily pass. They did deduct part of the cost of our daily pass from the annual pass fee, but not all of it. Unless you are absolutely sure you are only going to spend one day there, consider buying the annual pass. Do the math first. Then buy your passes. I recommend adding on the 45 minute movie Beyond All Boundaries, produced and narrated by Tom Hanks. Watch this first. It will put you in the proper frame of mind to truly appreciate the rest of the museum.

As part of your ticket you’ll get a credit card size “Dog Tag.” You’ll learn more about that shortly.

After you get your pass, get in line for the troop train, in the background of the photo above. Here’s where you start your journey. The passenger car is a replica of one that carried millions of soldiers, sailors, and airmen to training bases or embarkation points.

You’ll learn how to use your Dog Tag here. There’s a video terminal in front of each seat and a place where you can scan your tag. This is where you’ll be “assigned” a person who participated in the war. As you wander about the museum you will see more video stations where you can learn more about that person’s background and war experiences. You can also add digital artifacts to a collection that you can access on the Internet at any time. Sadly, the merchant mariner assigned to me did not survive the war.

So Ready for Laughter

This is a special exhibit that only runs through February 10, 2019. This exhibit followed Bob Hope as he traveled to far flung places around the globe to entertain troops. The effect of the USO shows on morale was immense.

The first part of this exhibit covered the interwar years, the rise of fascism in Germany, Italy, and Japan, and traced the slowly changing attitudes of Americans from isolationism towards more overt support of Great Britain and its allies. Immediately after Pearl Harbor, Americans went all in.

Once America declared war, this exhibit shows how America cranked up its war production in record time. Factories producing consumer goods were quickly retooled to produce something to add to the fight. Everything imaginable needed to support the war effort was produced in prodigious quantities. 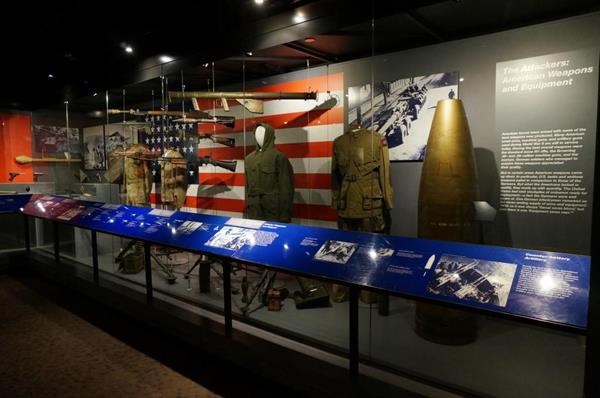 As the name implies this exhibit focuses on the June 6, 1944 invasion of Normandy. You’ll learn how the Germans prepared for an invasion, what the Allies were up against, feel the tension as General Eisenhower made the decision to launch the invasion, hear oral histories from both sides, and see the weapons they used.

This building is dedicated to the military campaigns in the European and Pacific Theaters. I spent two full days touring these two exhibits, one day for each.

You don’t just walk through sterile halls displaying artifacts. As you pass through these two exhibits you are surrounded by the sights and sounds of battle. You are on a carrier bridge, walking down a road in a bombed out town in France, on a Pacific beach strewn with the detritus of war. You can watch narrated war footage. Unlike wartime newsreels, you won’t just see enemy dead. You will see the toll the war took on combatants and noncombatants, friend and foe, alike. You will hear small arms fire and feel the concussion of exploding artillery. You can listen to the voices of those who fought as they tell their stories. You can read about the heroes, some who survived and many who didn’t. You can view artifacts and read the stories behind them. You walk through these halls and come away with a sense of how horrible war really is.

You also get a sense of how immense and how personal a world war is. For example, one of the momentous events of the war was the dropping of the first atomic bomb on Hiroshima on August 6, 1945. Yet, on a personal level, that event is captured on one innocuous line on pilot Col. Paul Tibbetts’s flight record. Many of the artifacts you see may appear ordinary until you read the signs that go with them. Then they become extraordinary. Everything in this museum tells a story.

As the name implies, this is where you can watch Beyond All Boundaries. In addition to a gift shop and restaurant, there is also one exhibit on the second floor.

This is the smallest exhibit in the museum. The men of the merchant marines are the real unsung heroes of the war. They didn’t carry guns. They carried troops, fuel, arms, ammunition, tanks, artillery, planes, food, medical equipment, and all the other things necessary to fight a global war.

And many of them died, mostly in the European Theater where U-boat wolf packs stalked and pounced on convoys. There were no front lines. You never knew if you were being watched or were in the crosshairs of a U-boat’s periscope until you saw the gut-wrenching sight of a torpedo heading your way or until the torpedo hit with sudden, savage fury. In the first two years of the war, before there were enough escort vessels and long range planes to protect convoys, the merchant marines suffered horrendous losses. 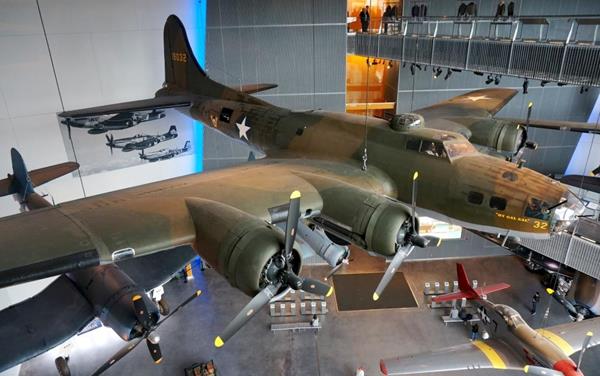 This exhibit is where you will find the bigger “tools” used to fight the war. Most of what you’ll see are aircraft, such as the B-17 in the photo above. As with the rest of the museum, there’s a story that goes with each plane. The story behind My Gal Sal is particularly interesting. The bomber crashed landed in Greenland on its way to Europe. The crew was rescued ten days later. The bomber was not seen again until 1964. A crew of dedicated volunteers recovered the bomber in 1995 and restored it over the next 12 years before donating it to the museum.

This exhibit illustrated the ingenuity and innovation shown by both sides in their efforts to counter new weapons and tactics. I particularly like the giant “ear” in the photo above. The idea for this device was to focus and amplify sound so that the device’s operators could detect and locate incoming bombers long before they arrived. I don’t know how well it worked in practice.

This entry was posted in History, Museums and tagged Louisiana, New Orleans. Bookmark the permalink.