We finally made it into Texas on I-10 and were shocked when we saw mile marker 880… as in 880 miles on I-10 to cross Texas. We had planned stops at several National Parks but the government shutdown was still in full swing so we were getting a bit depressed about the length of time it was going to take to cross the state with only a few of our planned stops available to us. We swung straight into the really cool Texas Welcome Center and started browsing brochures and pamphlets. Once we had a good stack of those, we thoroughly enjoyed walking the boardwalk through their marshlands before crawling back into the rig and starting the countdown to “1” (880 miles to go, 880 miles…)

Our next planned stop was San Antonio but first, a quick overnight in Beaumont, TX. We started reading those brochures and Holly was immediately distracted and ready to ditch I-10. Texas has Whoopers! As in endangered whooping cranes… THE largest bird in North America and they winter in the Texas coastal marshes and in Aransas National Wildlife Refuge and it’s only a few hours south of here… So, being totally retired and NOT ON A SCHEDULE (we love that), we rolled off across the vast Texas countryside. It was a weekend and we couldn’t get into Goose Island State Park on the coast or Goliad State Park as a way point so we booked into “Angels in Goliad.” It is basic with very nice gravel pads, full hookups, free Wi-Fi and cable. No fancy amenities but we seldom use those anyhow. The RV Park is owned and operated by a young family who were extremely outgoing and helpful. Our tourist info said there was a historic Presidio and CCC rebuilt mission in town so we figured we could keep busy. When we weren’t touring, we used the free campground Wi-Fi to search out campsites and book our next few weeks.

Goliad is small but has a ton of history (more from John on that later, I’m the color commentary person and don’t like to get bogged down in minutiae). What went on here was bigger than the Alamo and was the rest of that saying that we all know. “Remember the Alamo” was apparently “Remember the Alamo! Remember Goliad!” (Yeah, we never heard of it either until we accidentally landed there)

The Goliad town square is beautiful with a gorgeous stone courthouse and many colorful historic buildings around the square. For a bit of a downer, check out the hanging tree… conveniently located right outside the courthouse. If you were found guilty and it was a hanging offense, you were taken straight to the tree. How… efficient. The old firehouse serves as a free museum and info center and is well worth a stop in. There is a boardwalk hiker/biker trail that runs from town through the woods along the San Antonio River first to the Goliad State Park and Mission (with a really cool visitor center across the street) and then on to the Presidio and other historic sites (all in all about 2 easy miles one way). Goliad is DEFINITELY worth a stop. Budget at least two or three days. We had good meals both at Jalisco on Route 59 and at Empresario on the town square. The Blue Quail on the square was recommended but closes at 2:00 so we never made it back to try their sandwiches and jalapeno soup.

Fun story: For the centennial or some such, someone decided that driving a herd of Texas Longhorns through town would be a really cool historical reenactment. And it was… until someone honked a horn and turned it into the shortest parade in history. The cattle stampeded. They went into cars, on top of cars, over cars, up on the sidewalks, down the streets and through anything that got in their way. The trail boss was the only one hurt and suffered a broken limb and concussion. Needless to say, no town cattle drives have taken place since then (however Santa does ride into town on a longhorn). Read about this and other history at the museum/information center and pick up your walking guide and other useful information while you’re there.

Over time the flags of nine “nations” flew over this fort several of which you have probably never heard of.

Match these flags to their “country”:

One of the oldest churches in the United States is on the grounds of the presidio. Our Lady of Loreto Chapel, completed in 1779, is still an active church. It was also the site where the first Declaration of Independence from Mexico was signed in December 1835. It was also the site of a more depressing event. More on that later. 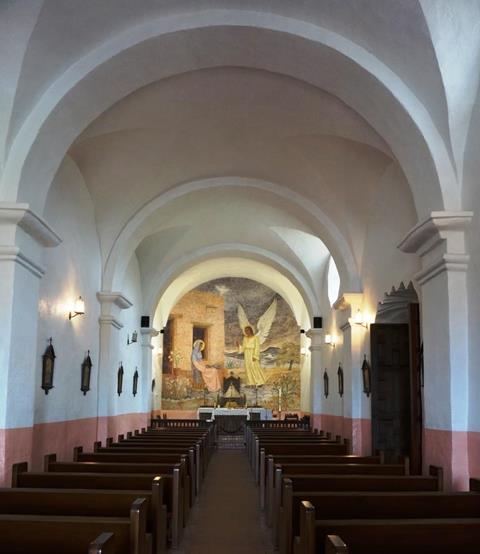 Our Lady of Loreto Chapel

Goliad’s name was changed from La Bahia to Goliad by rearranging the letters of the name Hidalgo, a priest that started Mexico’s path to independence. Don’t ask me what happened to the H.

The history of Texas before it became the state of Texas is complicated. So is the early history of Mexico. And the two are inextricably linked. I’ve just started my quest to learn more by buying several books on the subject.

Mexico achieved its independence from Spain in 1821. But Mexicans couldn’t decide what type of government they wanted. On one side were the Federalists who supported statehood and a restoration of the Constitution of 1824. The Centralists favored a strong central government, basically a dictatorship. As is usually the case, the issue was not decided peacefully. The Centralists under President General Santa Anna took control of Mexico although fighting continued. At this time, Texas was part of the Mexican state of Coahuila y Tejas. American colonists, called Texians, supported by volunteers from the United States turned an internal Mexican revolt into an independence movement. Santa Anna was having none of it.

One group of Texians under Col. James Fannin gathered in Goliad to await a Centralist army commanded by Jose de Urrea. A second group commanded by William Travis was at the Alamo in in San Antonio. When the Alamo fell, Fannin was ordered to retreat to Victoria, leaving on March 19, 1836. His command was trapped near Coleto Creek where a two day battle ensued. After the Texians surrendered, they were taken to the presidio and housed in Our Lady of Loreto’s chapel.

Francisca Alavez, who accompanied a captain in the Centralist Army became known as the Angel of Goliad. When she learned of the pending executions she saved as many of the condemned men as she could, including a 16-year-old. She begged for their lives, helped some sneak out and hid others.

On March 27, 1836 the able-bodied prisoners were divided into three groups and marched in different directions away from the fort. The Mexican troops then opened fire. Most of the men were killed. A few managed to escape. The wounded prisoners, including Col. Fannin were also executed. Up to 342 men were believed to have been victims of the massacre. Contrast this with the 182 to 257 Texans killed at the Alamo, most while fighting Santa Anna’s army. In 1936 the State of Texas built a monument to Fannin’s men.

During the battle of San Jacinto in which Santa Anna was defeated, the cries of “Remember the Alamo!” and “Remember Goliad!” rose from the throats of the Texans.

If you celebrate Cinco de Mayo, you can thank General Zaragoza.

Born in Goliad in 1829, he moved back to Mexico and became a military leader in the war against the French, who had taken possession of Mexico. General Zaragoza led his undermanned Mexican army to victory over the French on May 5, 1862.

This mission is part of the Goliad State Park in Goliad, Texas. It is a beautifully restored church.

I’m going to save my discussion of what the Spanish missions were all about for a later post.

In short, the purpose of a mission was to convert the native population to Catholicism and to teach them skills and trades. 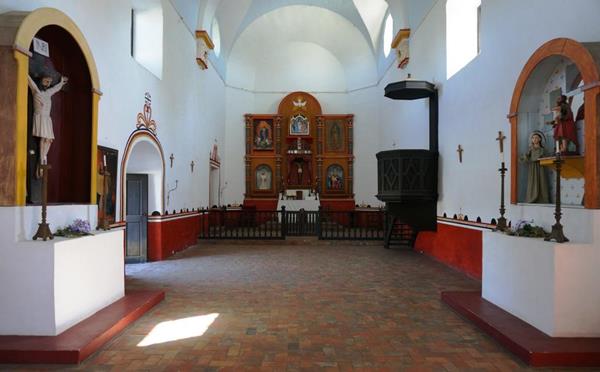 This entry was posted in History, Museums, Parks and tagged Texas. Bookmark the permalink.