We spent Valentine’s Day in an ancient volcanic caldera. How cool is that? 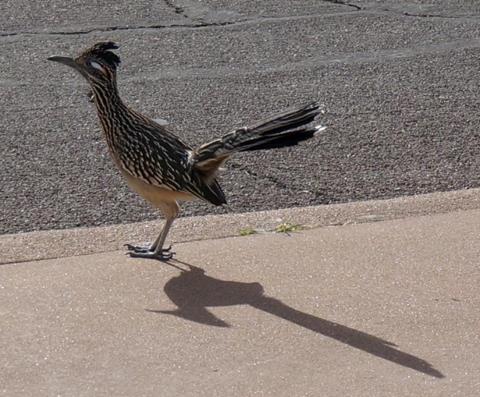 Roadrunner on the sidewalk

While much of Big Bend appears to be relatively flat you can’t help but notice the Chisos Mountains, the southernmost mountain range in the lower 48 states. About 40 million years ago volcanic episodes created the mountains that can be up to 20 degrees cooler and receive twice as much rain as the rest of Big Bend. Nature sculpted the cooled volcanic stone using wind and water and created a really neat geologic playground. The Chisos climate system supports plants and animals not seen elsewhere in the park and some not seen anywhere else in the US.

The feature that stands out the most in the Chisos is Casa Grande which is a massive stone outcropping rising far above the rim of the basin area. The Chisos Mountains are totally surrounded by the Chihuahuan Desert. It was totally strange to have the temperature go UP as we drove up the mountains. Chisos Basin has higher precipitation, more moderate temperatures, motel like lodging and restaurant, gift shop, camp store, campground and numerous beautiful hiking trails. All this is accessed from one central location nestled in the mountains. Because of this, it is the busiest area of Big Bend National Park. This is where the park visitors go in the summer. The riverside areas at Rio Grande Village and Cottonwood/Castolon are too hot so those visitor centers are closed but we were told the campgrounds are left open for the ones that want to brave temperatures over 100 degrees every day. I recommend double checking that before planning to test your heat tolerance. You would be on your own as there are no camp hosts along the river during the summer season.

We drove up to Chisos Basin three times in our nine days on the east side. The first was purely exploratory so we could check out what was there and whether we should try to bring the motor home up into the mountains. We opted to stay at Rio Grande Village and drive back and forth for the hikes. 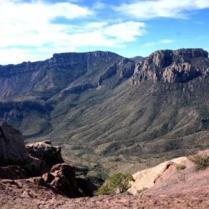 Our first hike in the mountains was the Lost Mine Trail. ABSOLUTELY GORGEOUS! Trail information states that this is the trail where you are most likely to see bear and mountain lions but sadly none came into view while we were there. This trail leads to Lost Mine Peak, where legend has it that Spanish explorers discovered ore here on their search for gold and silver. They enslaved the local Chizo tribe and forced them to work the mine. To keep the mine’s location a secret, the workers were led to and from the mine blindfolded. Eventually the Chizo revolted, massacred their Spanish captors, and sealed the mine.

One thing that struck John was the stark contrast in vegetation. In the middle picture above, there’s a distinct “knife edge” running up the middle of the mountain. To the left of the edge, the mountain is pretty barren but to the right it’s filled with trees. You don’t see things like that in little ol’ Maryland.

The hike was not too difficult although the elevation gain was pretty decent. We thoroughly enjoyed our hike and the awesome views before heading the rest of the way into the basin for a very nice Valentine’s Day dinner with stunning views out through the glass window of restaurant and then down through the natural “Window” opening in the mountain walls. We heard that the sun sets THROUGH the natural “window” twice a year. I’m not sure when that happens but it might be worth scheduling your visit to catch that. After dinner, we walked the short, paved Window View trail then hung out until the sun set behind one of the walls of mountains. It was beautiful! On the long drive back in the dark, we opened the car windows and enjoyed the heady scent of bi-colored mustard flowers and the bluebonnets that blanketed areas of the desert. Never did we think that a drive through the desert would smell like that. 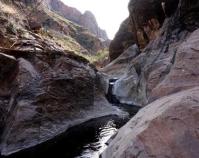 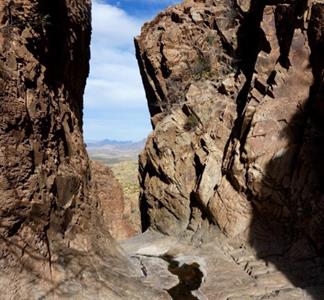 The next morning we left early and drove the hour back up into the Chisos Basin to do The Window Trail. This was a very nice hike that started near the Chisos Basin Visitor Center. The trail ends, literally, at the pouroff. We kept stopping to look around and up, up, up the walls of the mountains. The rocks are rough and broken or water smooth with amazing stone steps built right into the side of the narrow canyon taking you from side to side across the stream bed. The stream was dry until we neared the window and one of the mountain springs sent water bouncing and bubbling alongside us. After hiking in the dry creek bed earlier, we were surprised when suddenly there was water flowing in the creek beside us. The canyon narrowed and you can see where the creek has smoothed the walls leading to the pouroff. John went toward the edge for the photo shot but didn’t want to get close enough to watch it pour off the edge of the slick rock. The drop was over 200 feet so it was best appreciated from a wee bit back in the canyon. This was another missed opportunity that we realized after we read our little book. There was a 2 mile round trip side trail that would have taken us below the window so we could look back up through the cut. That is now on the list for future adventures. When we finished the hike we took the opportunity to enjoy lunch at the restaurant and checked out the visitor center before restocking a few supplies at the convenience store and heading back to Rio Grande Village. We did get a close up of a roadrunner that seems to hang out near the restaurant and picnic gazebo. He seemed pretty domesticated but we did not give him any food as we strive to “keep the wildlife wild!”

There are more incredible hikes in the basin but we didn’t feel fit enough to tackle the 12-14 miles it would take to get us up over the peaks and out to the rims of the mountains and back. They say it is an incredible view. There are backcountry campsites up there but we were also not ready to dig out our tent and backpacks and test out our rusty wilderness skills. That is also going on the future adventure list… we do a LOT and see a LOT and learn a LOT but our “future adventure list” keeps getting longer instead of shorter. We think this is a good thing. So much to learn and see and do everywhere!