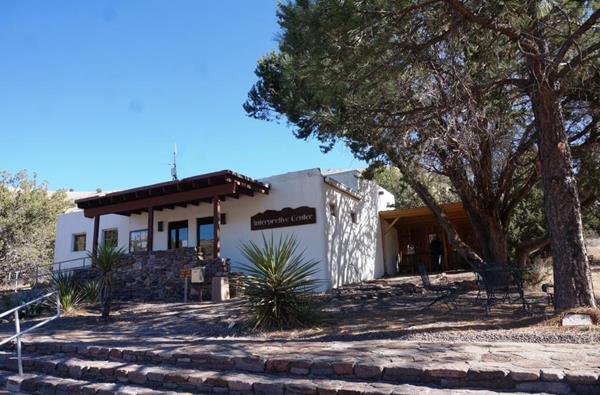 We shifted up to the Davis Mountains so we could tour that area. The State Park was very nice with full hook ups, partial hook ups and no hook ups. We scored a site in the partial hook up area. The park has a scenic drive up to the top of the mountain with stunning views of the surrounding area. The wind was ripping when we were up there so we had to hunker down to avoid being blown off the mountaintop. There is a hiking trail and a biking trail that run from the campground to the peak. We saw people doing the shuttle thing and dropping the biker off at the top for what must have been a wild ride down. Davis Mountains is known for its birding and the park has several bird blind areas to assist birders in finding them. They were IMPRESSIVE. One blind was like a little cantina bar with bar, stools and huge windows looking out to a little bird paradise with water features, assorted feeders and different natural perching areas. The second one is in their Interpretive Center where you can watch through peekholes outside or lounge on seats inside and view through the windows. The birdsong here in the mornings was amazing. 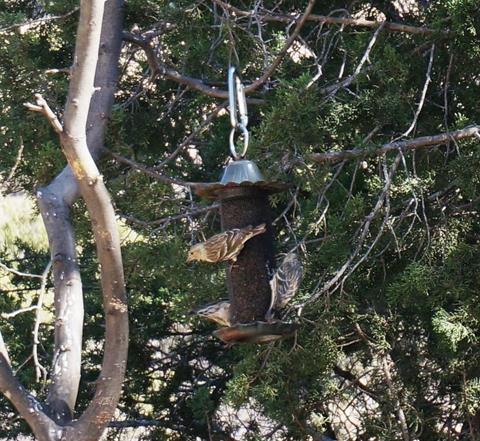 It was a nice, well-kept campground that served as our base of operations for our visit to Fort Davis and the McDonald Observatory. 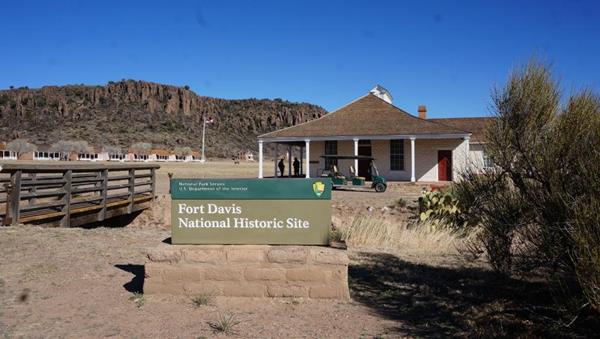 At first glance, Fort Davis doesn’t look anything like the frontier forts in John Wayne movies. There was no stockade wall. In fact the main road ran right through the center of the fort. Wandering through the visitor center and some of the buildings gave us a fresh perspective on what things were really like back in the day. 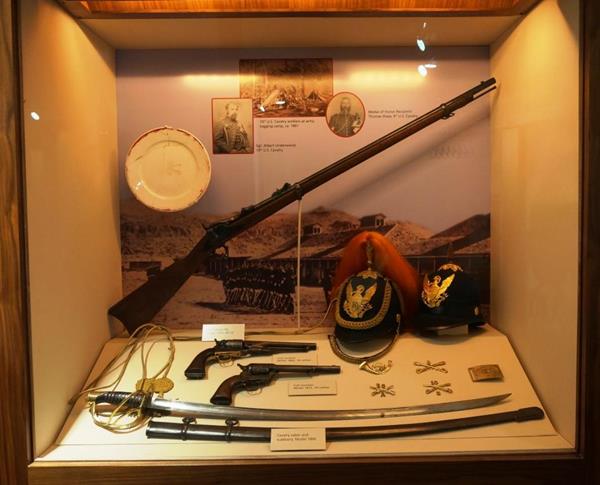 Native Americans didn’t generally attack fortified positions like forts or cavalry formations out on patrol. They were mostly opportunistic, attacking small, isolated homes or unguarded wagons. The army didn’t spend that much time out hunting Indians. Life was much more mundane.

For thousands of years, Native Americans called the Trans-Pecos, 200 miles of mountains and desert, home. At one time or another by 1850 Spain, Mexico, the Republic of Texas, and the United States claimed this land. Conflict was inevitable. In 1854 Fort Davis, named for Secretary of War Jefferson Davis (later the first and only president of the Confederate States), was established as part of a military system to protect travelers, mail, and goods moving west between San Antonio and El Paso. Other forts were also built along this “Lower Road”.

There were two Fort Davises. The first lasted from 1854 until the start of the Civil War in 1861. That fort was garrisoned by about 200 men from the 8th U.S. Infantry. But warfare in West Texas was very different from what the U.S. military had been trained for. Heavily equipped Infantry mounted on mules or riding in wagons had no hope of catching Indians on horseback. Apache, Comanche, and Kiowa were the main tribes to come into conflict with the Americans.

Fort Davis was reestablished after the Civil War by elements of the 9th U.S. Cavalry who were also known as Buffalo Soldiers. By 1890 there were over 100 buildings on the fort. The daily life of a soldier at the fort was tedious, boring, and monotonous – drilling, cutting wood, hauling water, standing guard duty, working in the kitchen, caring for horses and mules, and building and maintaining post structures. 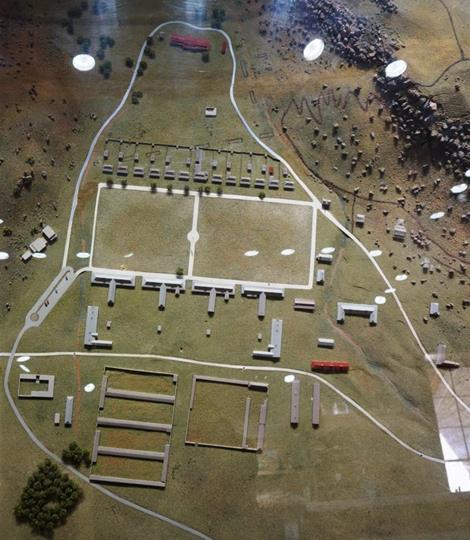 So what did these men do? They patrolled the border between Mexico and the U.S. They escorted stagecoaches and the U.S. Mail. They constructed thousands of miles of wagon roads and strung hundreds of miles of telegraph wire. They manned subposts giving Fort Davis control of an area up to a 100 mile radius from the fort. They scouted for and pursued Indians. They engaged in over 100 skirmishes with Indians, an average of about 4 a year.

Despite serving their country, racism was never far from the surface for these African-American soldiers. In June 1887 Henry Ossian Flipper was the first African-American to graduate from West Point. He was stationed at Fort Davis from November 1880 to December 1881. While at the fort he was accused of embezzling funds, falsifying records, and lying to his commanded. Although cleared of those charges, he was convicted of “conduct unbecoming an officer” and dismissed from the Army in June 1882. After reviewing his case in 1976 his record was corrected to show that he was honorably discharged effective June 30, 1882. In 1999 President Bill Clinton pardoned him.

What killed Fort Davis? Railroads. When they bypassed Fort Davis, its fate was sealed and it closed for good on July 3, 1891.

Once we finished with the visitor center we wandered around the fort. It was a chilly and very windy and blustery day.

The commanding officer’s house was located in the middle of “officers row.” It was easy to identify as it was the largest house in the row. 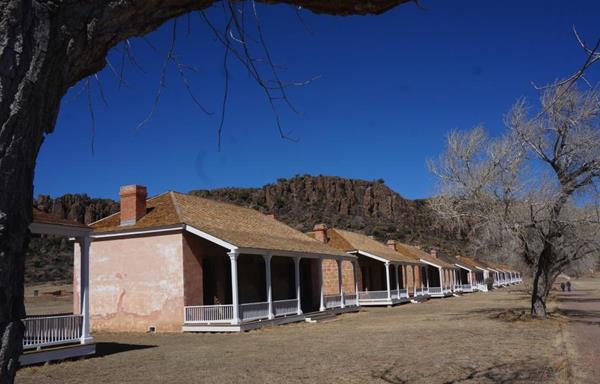 The house had two parlors. The front parlor was reserved for military and civilian guests while the back parlor was used by the family. 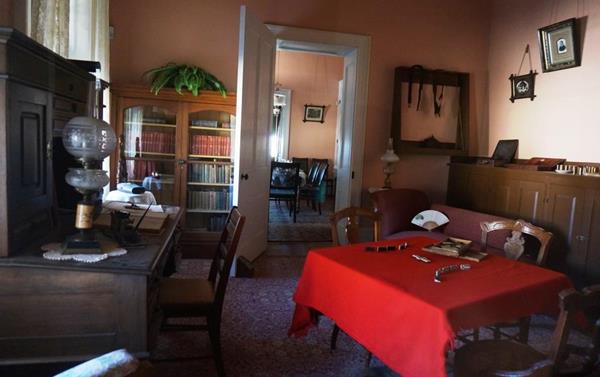 It was common practice for officers’ to share a house when separate quarters were not available, a frequent occurrence. Two officers and their families would then occupy the same quarters and convert the center hall into a joint dining room.

As you might expect, the enlisted men’s quarters were more Spartan with much less privacy. A row of bunks and a fireplace lined each wall. Along the center of the building were two wood-burning stoves and racks were firearms were stacked. We were told that the firearms were locked to prevent barracks fights from degenerating into shooting matches. 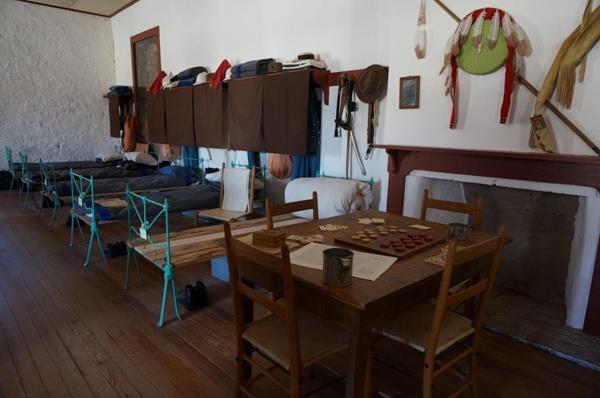 While touring the fort’s hospital, I saw a sign that listed the causes of death of 20 soldiers. Fourteen died of disease – consumption (tuberculosis), pneumonia, typhoid fever, dysentery, etc. One cause was “softening of the brain” but I can’t figure out what that means. One soldier was murdered, three were “accidentally” killed, and one drowned. One was killed in action by an Indian. Still, given the primitive medical knowledge of the day, the fort’s hospital was considered one of the best medical facilities west of San Antonio. 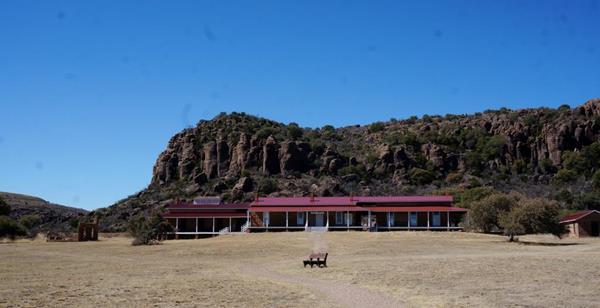 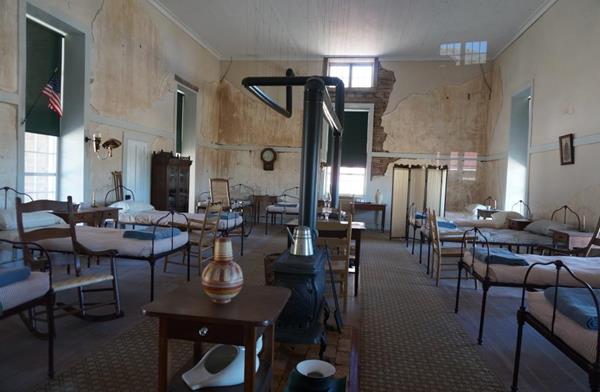 Like most forts, one of the busiest places was the commissary.

Figuring out how much food and supplies to order as well as keeping track of them was a full time job for the Commissary Sergeant. There was no corner 7-11 or grocery store for him to run to if the fort ran out of something. Supplies were shipped from San Antonio, more than 400 miles away. Supply trains were only required to travel 8 to 12 miles a day. If you do the math it could take up to 40 days for a supply train to get to Fort Davis from San Antonio. It might take longer if the train were stalled by bad weather or Indian raids. This meant that some of the food was spoiled before it reached the fort. 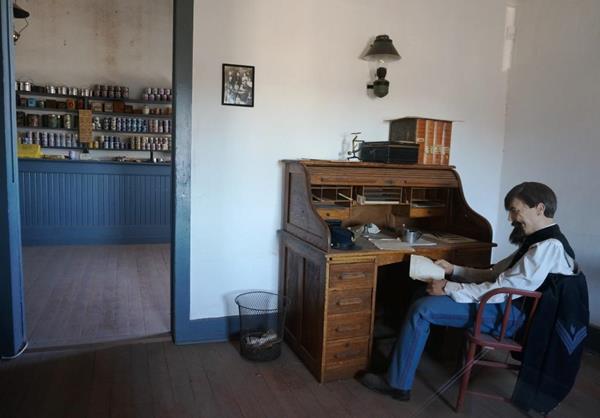 Quite a few of the buildings are in ruins, most with just the outlines of their foundations left. Still, I got a pretty vivid picture of what the fort looked like. I imagine the view today is not much different than what those living in the fort saw over 100 years ago. 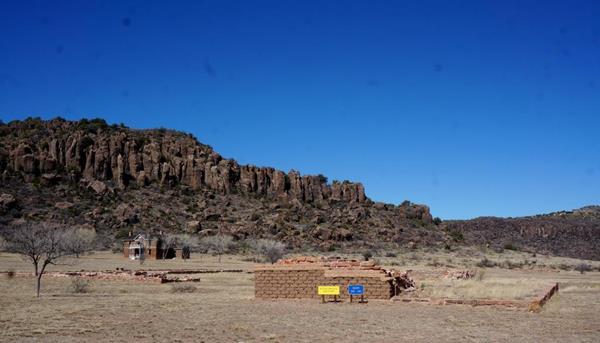