We hopped on over to Catalina State Park to position ourselves better for a visit to Biosphere 2 where we planned to catch some very cool science.

Biosphere 2, a mini-Earth, is a closed system. What does that mean? Simply put, once the doors are sealed up whatever’s in there has to support itself. Nothing is added and nothing is taken out. The air, land, water, plants, and animals have to work together to sustain themselves.

Six separate biomes were built into Biosphere 2: Ocean, Mangrove Wetlands, Tropical Rainforest, Savanna Grassland, and Fog Desert. To complete the first experiment they added 8 adult humans, tons of plants, insects, fish, birds and other animals. Then they sealed the door.

We toured the impressive facility trying to see what it HAD been instead of what it has become. It is still an amazing facility but once it ceased being a closed environment things changed. Experiments took their toll on the coral reef and the rain forest. No longer is it a uniquely balanced environment, closed off and monitored. The doors are now open and hundreds of people tour the facility every day. Even so, we could see what it had been and we tried to mentally put ourselves in the place of those first volunteers.

One question nagged at John: Could you isolate yourself with six or seven other people for two years, grow, harvest, and cook your own food, and maintain and repair your environment? Between 1991 and 1994 two separate crews did just that. Once they were locked in, nothing was to come in from the outside. The first crew made it the full two years. The second crew did not. (If this sounds like a reality show, there was a little blurb that said the failed Biosphere mission triggered that idea.)

What was life in a giant terrarium like? Each Biospherian had his or her own two story apartment so there was a TINY bit of privacy. They also had a machine shop with everything they needed to maintain and repair the technical systems. If you couldn’t fix it, it didn’t get fixed. No one made house calls. Not even the doctor (one of the eight was a doctor so he was locked in there too). There was no such thing as pizza delivery. All your cravings went unfulfilled. And you did not want to mess up when it was your turn to cook. There were no do overs or running to KFC for fried chicken dinners. They ate what they had planned for that day, even if it came out really, really bad. They ALL lost weight while in the biosphere. They were healthier when they came out, but much, much leaner because of their mostly vegetarian diet and the fact they couldn’t grow as much as they hoped and were all on reduced intake. They had to grow everything, harvest it, preserve it if needed, store it and cook it. They even had to grow their own coffee. They had an agreement that if any one member got coffee, they all got coffee. And they did… each crew member got one cup of coffee per month! ONE!! Per MONTH!! That would have been the deal breaker for me.

To me (John) the coolest things about Biosphere 2 are the lungs. You read that right. Lungs. HUGE lungs. Two of them.

Why did they need lungs you might ask? What happens when the air is heated in a balloon? The balloon expands. When the air cools the balloon contracts. But Biosphere 2 is a rigid structure and cannot expand and contract. Instead the air pressure in Biosphere 2 would increase or decrease as the temperature increased or decreased. If the pressure changed too much the windows might get blown out or sucked in. And that would end the experiment. 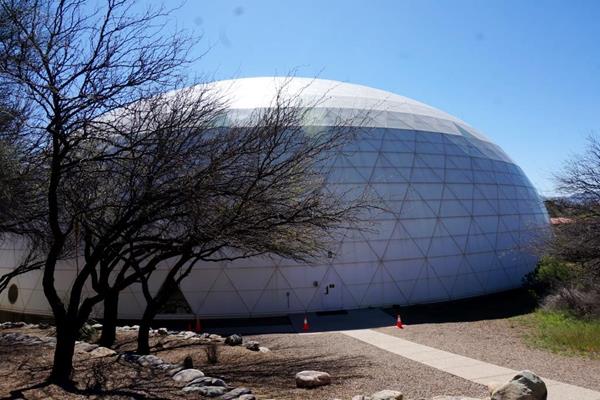 When Biosphere 2 was used as a closed system the Biospherians grew their food in the Lower Habitat. When those experiments ended, people thought about how to repurpose the Lower Habitat. Their answer was LEO (Landscape Evolution Observatory). The Lower Habitat was transformed into three 2-million pound artificial landscapes.

Scientific studies performed in LEO will help answer these questions: How does rainwater move through the landscape? How does biological activity change landscapes over time? The 40 by 100 foot landscapes are designed to mimic hills. Each hill is covered by 3 feet of engineered soil and monitored by thousands of sensors to measure water availability, temperature, and energy. Sophisticated measurements can monitor the water cycle “budget” in real time. This includes measuring changes in the weight of the hill as water enters and leaves as soil-water flow, evaporation, and transpiration by plants. In simple terms it’s “water in equals water out.” Scientists will observe how the landscape evolves and study how the introduction of plants changes the physical and chemical system.

Artificial landscape inside one of three modules

Was the original Biosphere 2 experiment a success or a farce? Were they ahead of their time in trying to find a way for humans to survive in an enclosed environment or was this just some rich guy’s hobby? It could be argued either way (and has been). An article we found online (https://tucson.com/morguetales/tales-from-the-morgue-locked-in-at-biosphere-ii/article_a6bda25c-8146-11e2-a3aa-0019bb2963f4.html#9 ) says that they had to pump oxygen into Biosphere 2 twice during that first experiment and they actually opened the airlocks twenty nine times during those two years (to remove research samples and to bring in supplies – type of supplies not specified). One of those breaches was to take a Biospherian to the hospital after she cut off the tip of her finger and required surgery.

We look on it as a success. In science you come up with a question or problem, think up a solution, figure out what you think the outcome will be, and test it… readjust and try again. Biosphere did just that. The last room we viewed showed a joint project with NASA… they are working to create enclosed, self-sustaining environments for humans that work AWAY from Biosphere 1 (planet Earth). The displays showed the progress being made toward putting a human colony on Mars. Supply missions would be few and far between. They won’t be able to “tweak” things that aren’t working right. If I were one of the pioneers sent to Mars, I would certainly hope that they built on the information that Biosphere 2 provided and figured out how to fix the problems they encountered, get a better grip on the food, improve the medical capabilities and address that really important problem: “not enough oxygen!”

This is a beautiful park. We are finally out of the desert and into Chaparral grasslands. There is a lot of lush grass here but the trees haven’t leafed out yet and they are still too short to give any significant shade. We spent two nights at the park and had water and electric hookups and no shade. We reserved the last space they had and we could only get two nights so we made do. It was spring break for many schools so there were lots of kids riding bikes and playing in the sunshine and fresh air. YES! Wrap them in nature. (Plug for a good book: Last Child in the Woods by Richard Louv).

We took a few walks around the campground and a drive about the park, but didn’t really spend much time there. We were surprised to find they had a seasonal overflow campground in what is normally a group area. It held over 30 RV’s. There were no hook ups but there was a bathhouse. After March 31st, that area will revert to a group site again.

The sites were nicely spaced but we did have some little neighbors right in our campsite. A couple of ground squirrels came out to feed on the lush green grass. They were fun to watch as they nibbled and played… and hid… like that guy in the picture. He thinks we can’t see him because he isn’t moving.

We woke up to amazing bird song our first morning at Catalina. There were at least 20 birds in the trees next to us, mixed species. It took a few minutes to realize the campers had a feeder in one of the trees. We don’t know how long they had camped in that site but there were a ton of birds that knew this is the spot to go for easy food. Unfortunately, those campers pulled out the next day and took their feeder with them. The birds hunted for it for a while then came over to our site and sang, squawked and generally made their presence known. I don’t speak bird but I’m pretty sure we were being told to pony up some food.

This entry was posted in Museums, Science. Bookmark the permalink.