There is ONE Titan II missile remaining in its missile silo. The silo and payload area have been rigged so it cannot be launched and a there is a hole cut in the cone of the missile so Russian satellites can see that no warhead is on the missile. The other Titan II missile silos were destroyed. Everything on site has been declassified so you can take pictures on the tour.

I grew up during the Cold War. Civil Defense was a big deal back then. Lots of people built bomb shelters. We “practiced” hiding under our desks to “protect” ourselves from “the bomb.”

Our tour guide walked us through what it took for a replacement crew to gain access to the control center and relieve the active crew. The entire site was surrounded by a fence. Strangely enough guards did not patrol the area around the site. Underground access points were protected by scoop-shaped motion detecting radar units. Four phone calls got the replacement crew inside the hardened control center.

The crew had multiple ways to get a launch message. Once they received it the commander had to unlock a red-painted safe and select the correct card that contained the launch codes. As you can see the consoles containing all the electronics are primitive by today’s standards. Still they did the job.

The launch code had to be entered into the control panel in order to allow fuel and oxidizer to flow to the first stage engine.

Two keys also had to be inserted into separate consoles, turned, and held for so many seconds. They were deliberately placed so one person could not perform that step by themselves.

Once all the steps had been completed the missile would launch in less than one minute. Once it was launched there was nothing anyone could do to stop it.

A long corridor led from the control room to the silo. This corridor, like everything else in the hardened part of the complex, was suspended on springs or other shock absorbers to cushion the effects of a nearby nuclear blast. The crew needed to access the silo so they could calibrate the missile’s instruments and perform other maintenance.

The silo door weighed 760 tons and could be opened in 20 seconds. The silo door is permanently locked in the half open position. 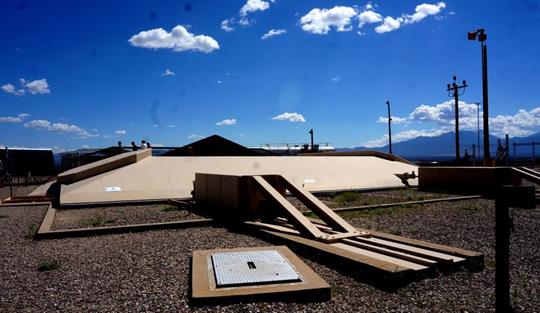 You can go up a platform and peer into the silo. It’s hard to imagine that such incredible destructive power once rested inside that nose cone.

To give you an idea of what this missile’s nine megaton warhead could do, there were several graphic images in the visitor center showing the warhead’s area of total destruction. One Titan II missile could obliterate 900 square miles of a city vaporizing untold millions of people in an instant. 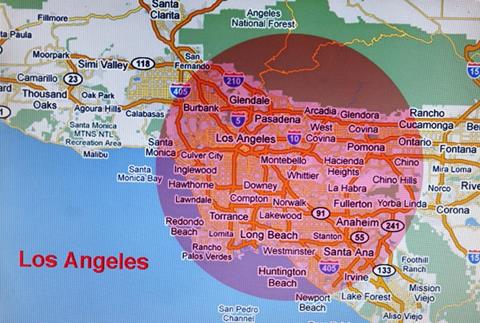 At least we don’t have to worry about the Titan II missile or it massive warhead anymore.

While examining the first stage engine, I spotted this dove – a symbol of peace – nesting in it. So in one sense, the remains of this missile have been converted to a peaceful purpose.

Whoa! This was interesting. Good tour, good science, excellent guide, impressive technology… sobering and scary. John is a rocket scientist (yes, certifiable) so he was more aware of the cold war rocket silos but it was all just bits of info that filtered down to Holly years ago… until we stood in the silo ourselves. I think this is an excellent tour for adults and older children, NOT for young ones. Leave them home.

Let me back up. The Titan II missiles were used to launch the Gemini missions into space. They are awesome technology. The missile is seriously cool to look at. The silo and “hardened” structures are impressive engineering. But this specific site is not about space exploration. This site is about war. Because the Titan rockets could have their fuel stored onboard for extended periods, giving them quick launch times, they were chosen as part of our defense system during the Cold War. The United States had 18 Titan II missiles loaded with nuclear warheads in “hardened” underground silos in the Tucson area as well as two other similar groupings in Wichita, Kansas and Little Rock, Arkansas. These missiles were put here to prevent “the end of the world as we know it.” Russia had nukes pointed at the US. The US had nukes pointed at Russia. Russia got more, the US got more. The US got more, Russia got more. Both sides had enough to bring about what is known as MAD – Mutually Assured Destruction. Mutually-both countries; Assured-guaranteed; Destruction-destroyed. Both countries are guaranteed to be destroyed – MAD. It’s the perfect Lose/Lose scenario. These weapons were considered a “deterrent” to keep the other side from launching. Lots of safeguards were in place to prevent the accidental launch of the missiles but once the launch had been triggered, there was no kill code – no way to stop that nuclear warhead from reaching its target. No, “oops, false alarm.” Luckily, neither side triggered a launch and we are alive to check out this last missile site and tell you about our tour. John covered the technology. I’m covering my mental wanderings. My brain is a scary place and you’re invited to come along for the ride…

So, if we had fired these missiles, how much BOOM are we talking about? We were told EACH missile carried a warhead that would produce a blast 600 times larger than what we dropped on Japan in WWII. We recently visited the WWII Museum in New Orleans so the massive devastation in Japan is fresh in our minds. What happened then was horrific but these… SIX HUNDRED times larger! And not just two bombs; there would have been dozens flying from each side. There will be no WW IV – or at least not for a very, very long time. WW III will pretty much take care of most of the human race. With the bombs and the massive radiation floating around, anything surviving on earth will be struggling to just stay alive… “It’s the end of the world as we know it.”

There was a newspaper article on the wall and I scanned just a bit of it but what I think the gist of it was is that the reporter was praising the Titan II tours as a way to teach about the cold war and nuclear arms without fear… without fear. That rolled through my head over and over as we drove home. HOW could you possibly learn that this mass destruction and brutal extinguishing of life is a button push away and have NO FEAR? The whole purpose of the nuclear arms is to put fear in the enemy so they don’t use theirs. I imagine some may look on it that the missiles have been dismantled, the silos destroyed, the cold war is over so no worries, right? But the nukes are not gone and they keep getting “better” – more accurate, bigger payloads, bigger BOOM. More and more and more… but no fear.

I don’t recommend taking children to this site. I watched some come in and excitedly check out the rocket toys and pictures. I watched a young boy, maybe six, enjoying the interactive video in the visitor center… until they showed houses being decimated on the test range. I heard him whisper to his father with fear in his eyes “Did those houses blow up?” and daddy replied, “Yes, they were too close to the explosion.” The child didn’t ask any more but his eyes were still wide and he continued to stare at the screen. He was thinking… and he was afraid. He wasn’t learning without fear.

I watched an older child, maybe 10-12, excitedly take the seat of the commander in the control room during the tour. He was proud to be chosen. After explaining the crew duties, the structure we were in, the function of the different lights, gauges, dials and buttons, the guide had that child “turn the key.” After the lights lit up on the panel, the guide announced that the launch had commenced and we were going to see if the missile was still in the silo… he congratulated that child, told him he just started WW III and gave him a card that said “I turned the key.”

I turned the key… I know that boy didn’t have full comprehension and maybe he won’t think any more about it but if he does, how do you answer the questions? How do you give back the childhood innocence that is blown away when they realize how close to total decimation the world really is? Forget the monster under the bed. They will learn that the real fear is THEM… those unknown people, somewhere out there – that can “turn the key” and send those nukes on their way. It doesn’t matter who starts it, us or them. If it happens, it’s “all in.” I guess you can go back to the training we got “way back when” in school. If they announce a nuclear strike tell the kids to “duck and cover” and pretend that will save them. I’m not sure the kids of today will buy that. They are not as naïve as we were back when our schools had fallout shelter signs on them and we thought hiding under our desks would protect us from whatever came our way. I could be wrong. They may take it all in stride. Our granddaughter already has regular “fire drills,” “active shooter drills” and school lock downs. She knows where to run and hide if someone invades the school and the teachers deem it safe enough to tell them to run for it. Times have changed. Maybe I’m clueless. Maybe the kids have already lost their innocence. Maybe they already know… and hide their fear.

This entry was posted in History, Museums, Science and tagged Arizona. Bookmark the permalink.