Mother Nature keeps hitting it out of the park.

If you stand on a flat area and look around, every peak you see was once a volcano. The still snow covered San Francisco Peaks appear to be a small chain of mountains. It’s actually the remnants of a single volcano.

The visitor center had some excellent exhibits on the volcano and its effects on the surrounding area. One of the first things I learned is that volcanoes are common here. 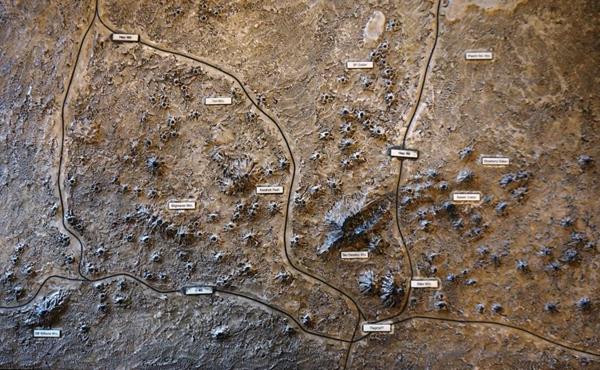 When the volcano now known as Sunset Crater erupted about 1,000 years ago, the surrounding area was populated by Sinaguans. Lucky for them, it wasn’t an explosive event like Mount St. Helens. There must have been warning signs because homes that belonged to the Sinaguans have been found under the ash but they had been vacated before the main eruption. The homes had been stripped of all their belongings including the wooden poles used in the roofs (wood was hard to come by in high desert areas so they took it with them.)

The volcano was born as a cinder cone. The cone grew fairly quickly, over a period of a few days to a few months. While the cone was still growing, a six-mile long fissure eruption – a horizontal crack in the ground – spread over six miles from the base of the cone allowing lava to escape. While Sunset Crater was erupting, lava was forced out of a deep fissure. The lava from that fissure flowed into a basin and pooled, eventually covering an area of two square miles to a depth of up to 100 feet. (This is known as the Bonita Lava Flow.) By the time the eruption ended, the cinder cone was 1,000 feet high and volcanic ash covered 800 square miles of land. All this occurred in a few short months, the blink of an eye in geologic time.

By then all life within a five mile radius of Sunset Crater had been wiped out. But not permanently. And that’s the amazing part.

To see that, take advantage of the hiking trails at Sunset Crater. We did and found abundant evidence of life.

Even on the A’a Trail, which takes you into the Bonita Lava Flow, there are signs of life. 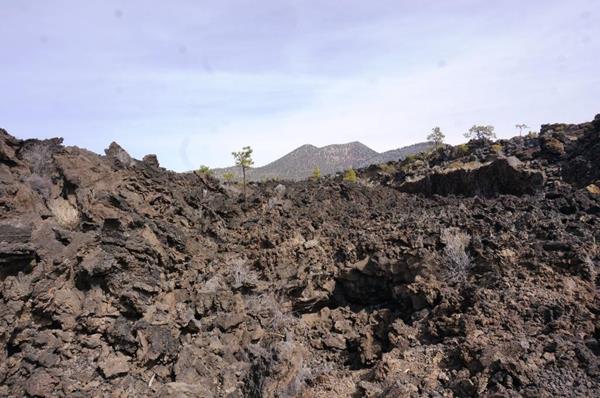 The views from the Lenox Crater Trail really show that life is making a comeback.

You can see grasses, shrubs, and Ponderosa Pines clawing their way up the crater’s slope. Grass gains a foothold on the barren cinders and slowly spreads. Organic material begins to accumulate. Small shrubs take root and add more material. Eventually trees can take root. Small islands of trees spread until the forest returns. 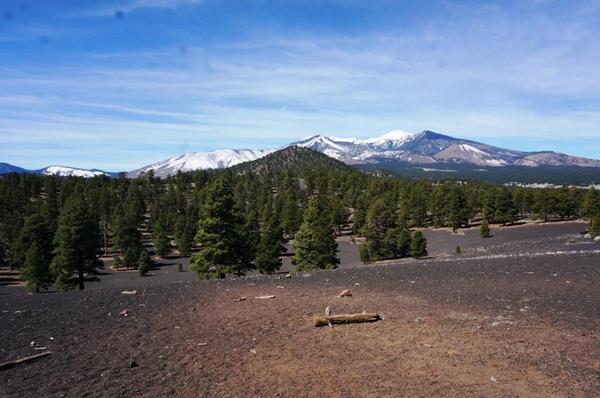 Penetrating the Bonita Lava Flow is a tougher job. Soil and organic material carried on the wind settles in the pores of the chunks and slabs of lava. Grasses can find a purchase but not shrubs and trees. A line of trees clearly marks the boundary of the lava field. 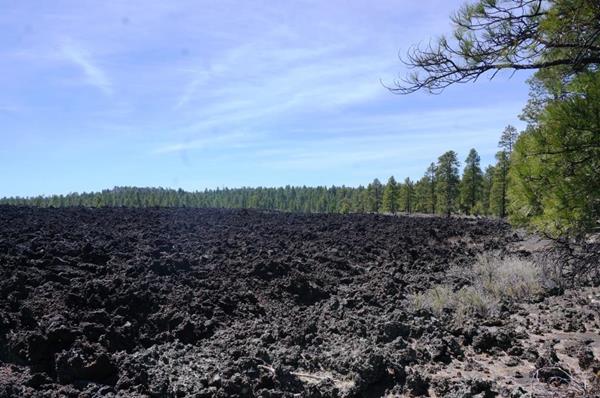 Besides the more visible volcanoes you can also find much smaller spatter cones, called hornitos (little ovens) in Spanish. The lava spurting from these cones are fed by lava flowing along the ground, not from deep beneath the earth. 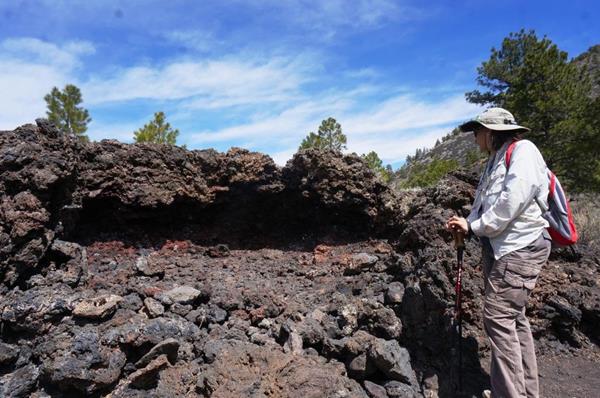 The visitor center provided a comprehensive overview of not just the Wupatki pueblo but surrounding pueblos too. You can see items used in the inhabitant’s daily life at Wupatki. These include sandals, cordage, hairpins, and jewelry.

Life at Wupatki, about 20 miles north of Sunset Crater, did not end with the volcano’s eruption. In fact, the shallow layer of cinders laid down by the volcano helped to conserve moisture and actually created somewhat better farming conditions.

While farming was important the people of Wupatki, they were also hunters and gatherers. In such an arid land, relying on farming alone for survival would have been reckless.

Wupatki and surrounding pueblos were ideally situated between peoples on the plateau to the northeast and in the desert to the south. Trade flourished between these peoples and Wupatki reaped many of the benefits.

Once you’re done with the visitor center, grab a free guidebook from a Ranger and take the self-guided tour of the ruins.

Wupatki was a 100 room pueblo that had a plaza, community room, and ceremonial ball court. But you can’t really appreciate its size and scope unless you get up close and personal. And it’s easy to imagine this being a vibrant, prosperous community. 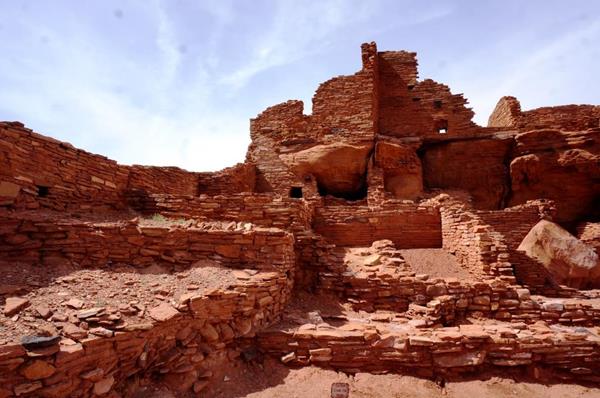 The ceremonial circle functioned much like an early American town square.

It wasn’t all work either. They built a ball court where men played a game similar to hockey with a pine pitch covered shaped stone serving as the puck. But no one knows how or why the game was played. But it must have been very popular as over 200 ball courts have been uncovered in Arizona alone. 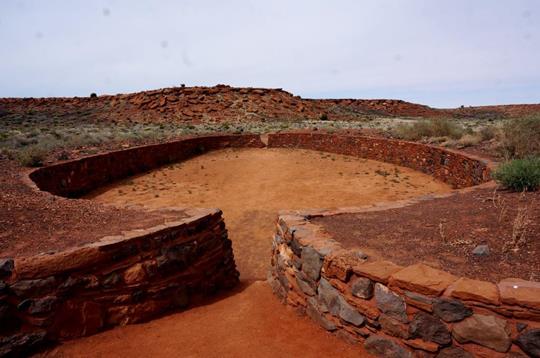 On wandering the backside of the ruins we came to a room that still had some of its original ceiling beams. 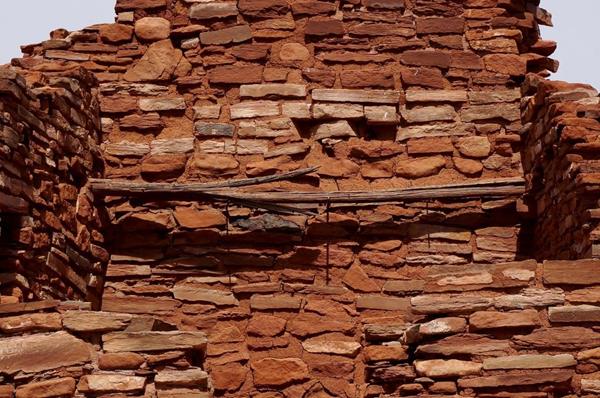 The two beams in the photo have been in place for over 800 years. It’s hard to imagine anything built today lasting that long. I guess planned obsolescence wasn’t part of their vocabulary back then.

Good thing or there might not have been anything left for us to see.

If you have the time, there are a few more ruins located about 10 miles from the Wupatki Visitor Center. We took a look at Box Canyon and Lomaki. The park was repairing the parking lot at the Nalakihu and Citadel Pueblos so we couldn’t access those sites.

We knew some friends of ours from Michigan were vacationing in Flagstaff and had tried to arrange a get together. We hadn’t heard back from them but, lo and behold, we ran into them at the Visitor Center. They were with another couple but we still enjoyed a nice 20 to 30 minute reunion. This isn’t the first time we’ve unexpectedly run into people we know and it’s awesome when it happens.

The visitor center is quite small but it’s location can’t be beat. The main room had a few displays and about 25 or 30 chairs arranged around a flat screen TV playing a short movie about Walnut Canyon.

There are two trails. The Island Trail is a one mile roundtrip but has 273 steps – not bad going down but a bear going up, especially at 7,000 feet. We had to stop quite a few times to catch…uh…take in the “breath” taking views. The Rim Trail is a nice, fairly level trail with some great overlooks.

The houses we spotted along the canyon walls are tucked into rock alcoves, providing a natural floor, back wall, ceiling, and overhang (to keep out the weather). Just add dividing walls between rooms, a front wall, and doors and, voila, you have a house…several hundred feet up a cliff. I found it astounding that the inhabitants managed to get to the top and bottom with (relative) ease. They even managed to create a trail system to the top and bottom of the canyon. 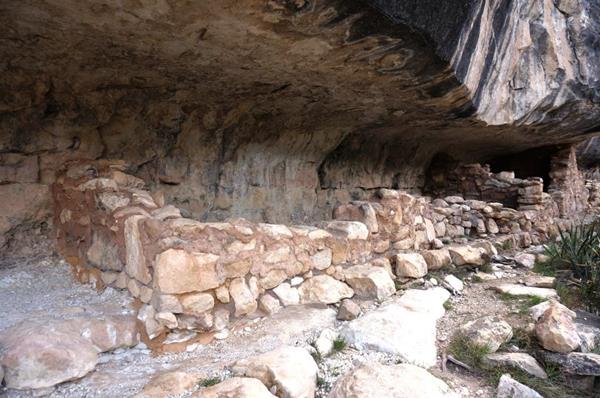 Most of the rooms were used for storage of tools, food, and water. Archeologists think the inhabitants stored up to 100 days of water. The only times water flowed in the canyon bottom were during spring snowmelt or summer monsoon rains. Water had to be laboriously carried from up from the canyon floor. I hate to think how many trips I’d have to make to collect 100 days of water…for each inhabitant. Let’s see…one gallon of water weighs 8 pounds…say you need two gallons of water per day…or 200 gallons for 100 days…makes 1,600 pounds of water…per person… Oh, my aching back!

If you take in a wide view of the cliff face, it’s hard to spot the dwellings. 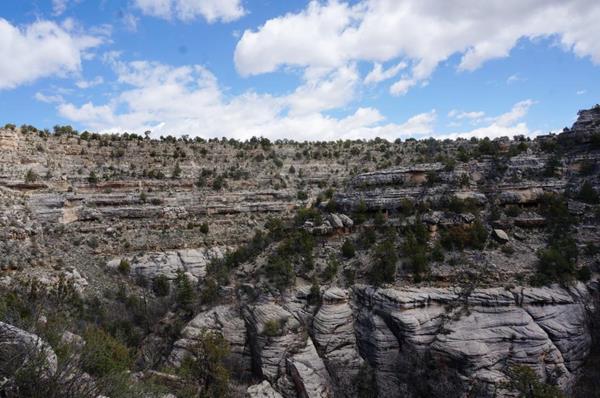 But look closely and you’ll see them. From my perspective there doesn’t appear to be any way up or down. 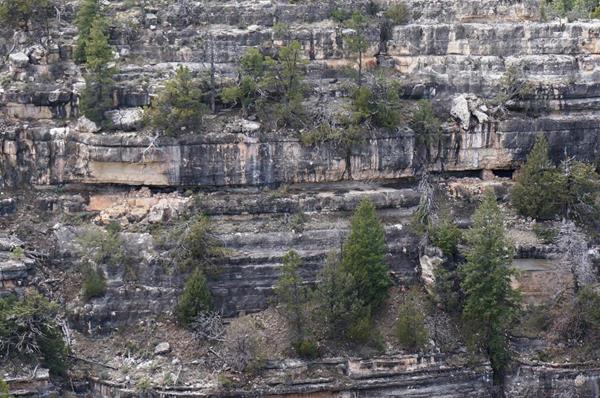 The daily routine included farming the land on the canyon rim and gathering food and water. They grew corn, beans, and squash as well as edible native plants such as amaranth, mustard, and bee plant.

It had to have been a tough life. But you can’t beat the views.

This entry was posted in Hiking, National Park, Walking Tours and tagged Arizona. Bookmark the permalink.