I wasn’t too sure about going to this site. First, it was privately owned and operated which makes me suspect that it was “just another tourist trap.” Second, being privately owned, how pristine and impressive was the crater? I shouldn’t have worried. It was spectacular and well worth the time, money, and effort to visit.

I didn’t realize that until recently scientists couldn’t tell the difference between a volcanic crater and a meteor crater. I thought it would have been obvious. Until the early 20th century this “hole in the ground” was thought to be a volcanic crater. Why? Despite intensive digging into the crater, no meteor was ever found.

The story of Meteor Crater began about 50,000 years ago. The meteor may have been up to 150 feet wide and weighed several thousand tons. When the meteor hit the atmosphere (about 100 miles above the Earth’s surface) it was traveling about 26,000 miles per hour. From that point until its impact with the Earth was a mere 10 seconds. Not even enough time to “duck and cover.”

Exploding with the force of a 20 megaton nuclear weapon, it took another 10 seconds for the meteor to gouge out a crater three-fourths of a mile wide and 700 feet deep. Eighty percent of the meteor was instantly vaporized. Several hundred million tons of rock was blown into the air. Immense shock waves devastated everything in its path for miles in every direction. A thick hot cloud containing molten meteor droplets, molten rock, and other debris rose thousands of feet into the air. 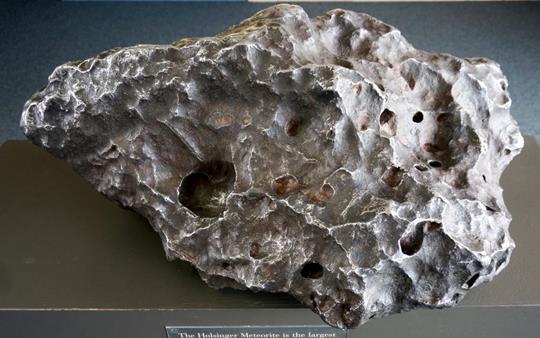 Until the late 1800s the crater was virtually unknown and ignored. Scientists who first studied the crater concluded that it was volcanic in origin. In the early 1900s Daniel Barringer, a mining engineer, became convinced that the crater had in fact been formed by a meteor. He was also convinced that the meteorite was still buried beneath the crater and spent the next 26 years looking for it. Evidence of his futile search is plainly visible in the crater.

Surprisingly, Meteor Crater was owned by…a cattle ranch, the Bar T Bar Ranch Company. In 1955, the Company formed Meteor Crater Enterprises to manage the crater. All the facilities were built, maintained, and staffed by the Enterprise. No tax dollars are used.

Oh, and you can see cattle grazing at the base of the crater. There’s also evidence that they also graze along the top of the crater. What evidence would that be you ask? Why, cow poop of course.

If you want to learn about meteors then this is the place to do it. Their visitor center and museum is excellent.

Your admission also gets you a guided tour along part of the crater’s rim. There’s also a self-guided tour to several overlooks. Both are worth doing.

The museum has plenty of exhibits to satisfy kids and adults, laypersons and science geeks (like me). You can learn about:

You can also “create” your own meteorite and see what happens when it hits the Earth. Pretty cool in a ghoulish kind of way.

Imagine you are an alien explorer from another planet 50,000 years in the future. (This would be long after we humans exterminated ourselves which, sadly, is not so hard to imagine.) The crater and everything about it has been long forgotten. You explore the crater and wonder what created it. You search the shafts and find…a wrecked Cessna airplane. You think, “How on Earth did something that small create something that big?”

It’s a little practical joke to play on future explorers. We may be extinct but we sure had a sense of humor.

Fun fact: There really is a wrecked Cessna airplane in the vertical shaft.

Fake fact: The plane did not create the crater.

The Cessna did not crash into the shaft. The pilot was ferrying the plane to the Bar T Bar Ranch and was curious about the crater. He flew into it for a closer look but wasn’t familiar with the air currents in the crater. He lost control and crashed. Fortunately both he and his co-pilot survived. But the airplane kind of ruined the view. What to do. Hauling it out would be expensive. So why not just dump it in one of Barringer’s shafts. Problem solved.

This entry was posted in Museums, Science, Walking Tours and tagged Arizona. Bookmark the permalink.