We were able to book several nights in Wahweap Campground at Glen Canyon. The large, full hook up sites book up months in advance but we were able to get a no hook up site with only a week or so notice (portable solar panel to the rescue again). The entire campground is on a slope above Lake Powell so most sites have some view of the lake. It was pretty crowded with boaters and families but it quieted down at night and we had a relaxing time there.

Lake Powell was seriously low and far less impressive than we had heard it would be. We had considered taking a boat tour to Rainbow Bridge but with the low water it would have been a considerable hike in full sun and intense heat so we opted to skip that this time around. The dam personnel said they were expecting a 40 foot rise in water when the spring meltwater flowed down. It will still be far from capacity but it will help with those extra-long boat tours and hikes that low water necessitates. The low water didn’t stop the pleasure boats from cruising the waters. We saw all kinds of speed boats, fishing boats and houseboats out there just wandering around on that sparkling blue water.

If boating on Lake Powell sounds awesome and you want to spend time on the lake but don’t have a boat and don’t want to rent one, you could be in luck! They have volunteer opportunities. Check out https://www.nps.gov/glca/getinvolved/volunteer.htm – there are working volunteer opportunities to clean trash or remove graffiti along the shorelines. You provide some elbow grease and they provide a boat and captain. We aren’t boaters so we noticing this opportunity is as far as we went with it. But it might be right for you.

Full Hook-up Loop D – that we didn’t stay in

We didn’t get onto the lake but we did enjoy walking around the many camping loops and down to the lake. There is a swimming beach near the campground but it is quite a distance downhill from the parking lot to the water, especially with the lake’s extremely low level. There is also a camp store with pay showers and laundry and convenience items (but no healthy food). An interesting note is that the camp loop pictured above is partly in Utah while the rest of the loops are in Arizona. Arizona does not do Daylight Saving Time so our phones would switch back and forth as we crossed that invisible line (or wherever our cells phones THOUGHT we were, we didn’t always agree on that). Glen Canyon NRC straddles the state line so it makes scheduling interesting.

The nearest town is Page, Arizona where we found awesome food at Big John’s Texas BBQ and an RV repair shop willing to replace our reluctant black tank dump valve. Unfortunately when we arrived for our scheduled appointment, all the back-ordered parts had come in for rigs waiting far longer than us and we were shifted down the line. Because we hadn’t secured a site for that night we rolled out and hoped to get repairs done in the near future (this proved to be a big mistake – trials and tribulations post coming soon).

There is a good visitor center at the dam as well as a gift shop and theater that shows several movies about the dam and water management (which is the main reason there is a dam, not for power generation). We paid the $5.00 per person fee to take the dam tour. It was very informative and included the top of the dam as well as the inner workings way, way, way down inside it. We walked just above that little grassy area to get the hydro power generator portion of the dam. That was a loooong elevator ride down. 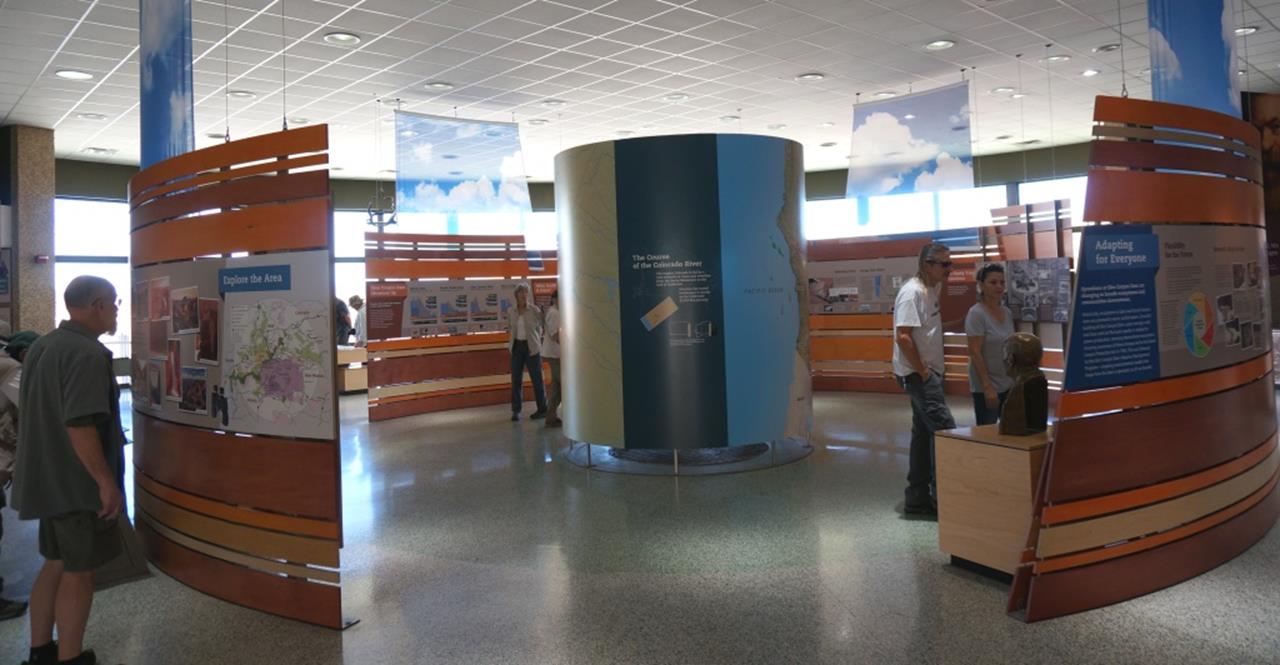 One of the reasons the dam was built here is because local people and environmental groups fought so hard against the original planned site up the river at Echo Park in Dinosaur National Park which is in Colorado. That battle became epic and has been credited with jump starting the modern environmental movement. They didn’t want another huge public fight on their hands so they found a site miles and miles and miles away from everyone in a place nobody knew about. This meant they had to truck everything in to build the dam there. A funny side note is they inadvertently created a town right next to the dam. The original worker housing was a trailer village that expanded and improved as the work went on for years and the workers built homes and moved families in. That trailer village grew into the city of Page. This didn’t affect the site selection as the people came after the dam. 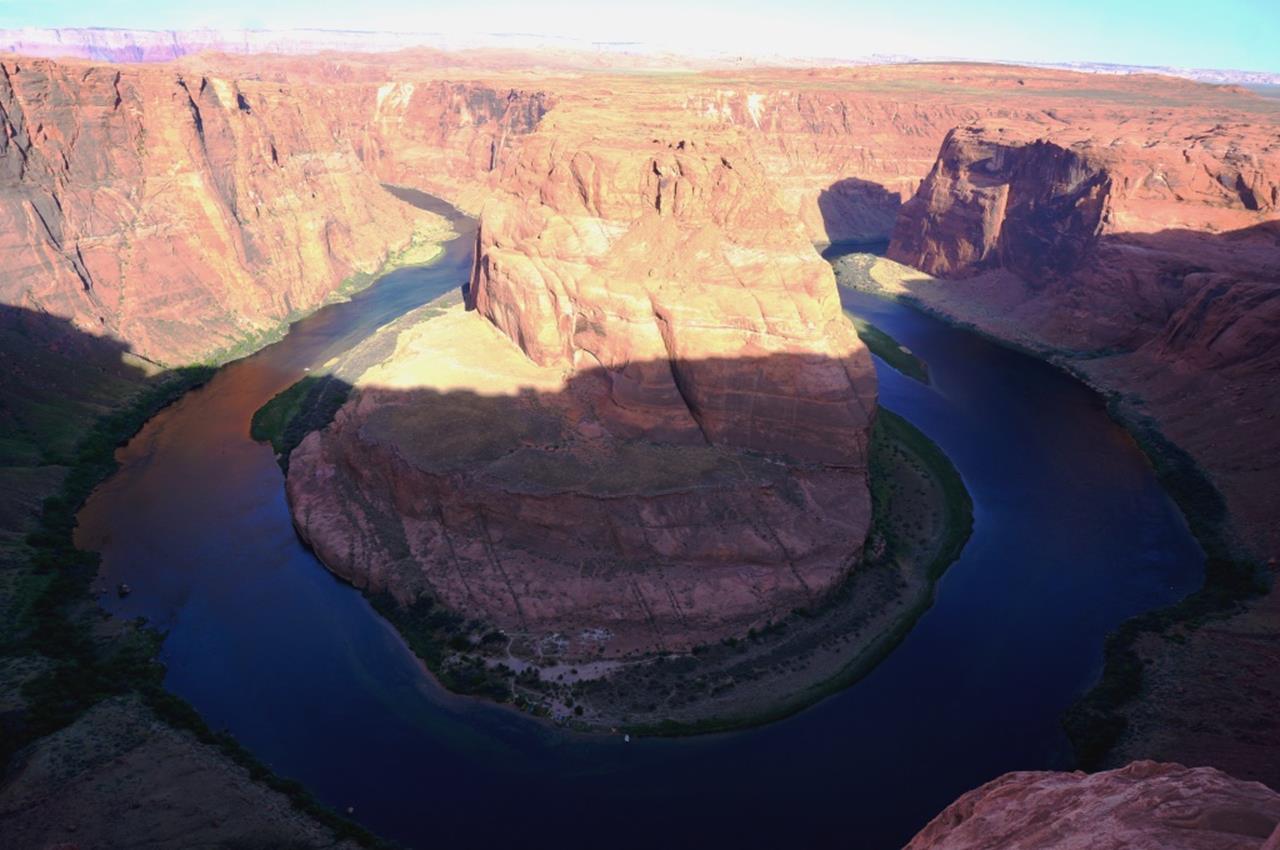 The famous Horseshoe Bend is in Glen Canyon National Park but to get to the view point on the plateau, you have to cross property managed by the City of Page. They have built a nice (fee) parking area and it looks like they are putting in a handicap accessible walkway. This is good because you are not going to get a wheelchair or crutches through the deep sand and rugged sections of trail that we walked on. One of the organizations has also put in a railing to try to reduce the number of people that fall over the canyon edge. We still saw some of those “invincible” people circle around to the edge of the fence and hang their bodies out over the side for better views or photos. We are boring people (that realize it is easy to do something stupid and die) so we took our pictures from behind the railing. As we gazed down at the river making that famous bend, we spotted boats pulled into the little camping area down there and remembered those people we met at Lee’s Ferry that had planned to spend the night at that famous spot as they floated down from the dam. It’s a bit washed out but if you look at the horizon on the left, you will see the Vermilion Cliffs. We were camped just a bit in front of there at Lee’s Ferry. This shot would have been better on a cloudy day. 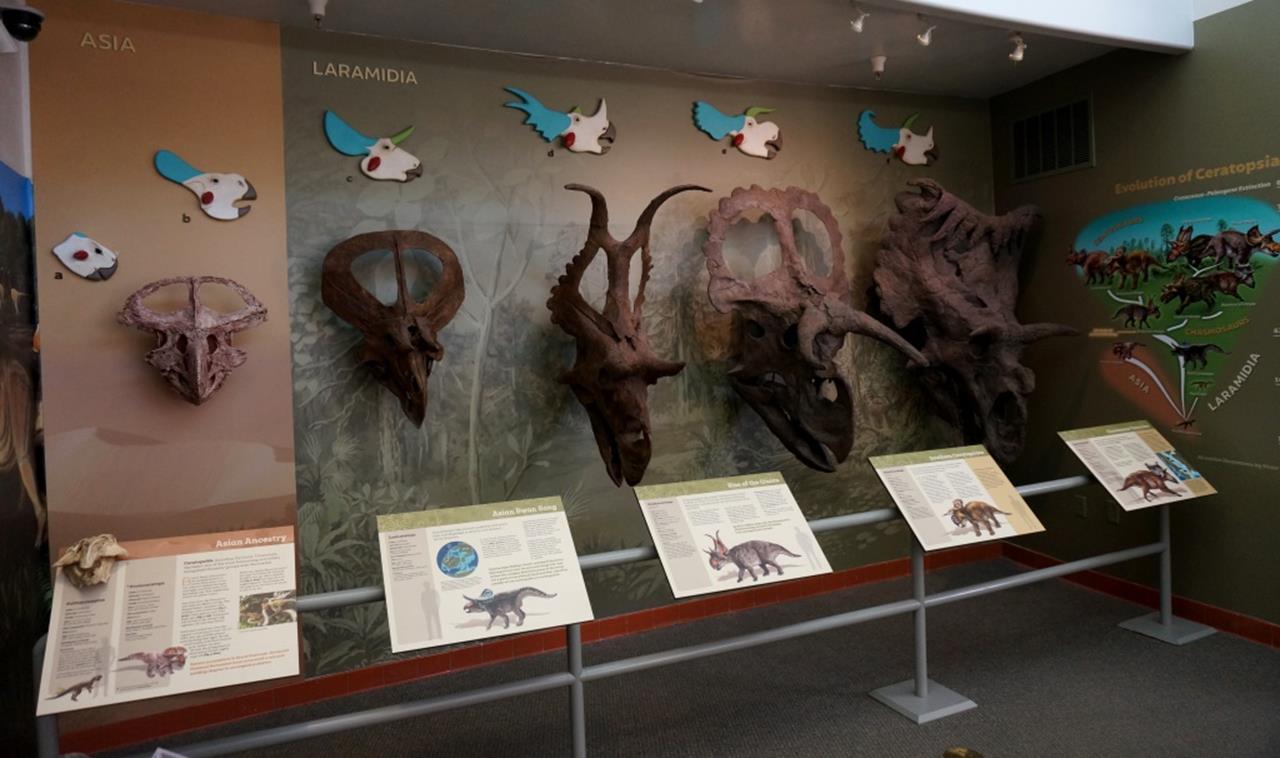 Grand Staircase has three visitor centers, each with a different theme. One was close(ish) to Wahweap so we wandered up there on one of our exploration days. The theme for this particular visitor center was dinosaurs. It is a small visitor center but they have excellent displays, maps, camping info and a small gift shop.

Back when we were camping at Lee’s Ferry we drove up onto the Kaibab Plateau and headed back off the north end of it (not OVER the edge, just drove the road that tracks down and over the end of the plateau). The Le Fevre Overlook and rest area on Rte 89A just at the edge of the plateau has an excellent view and signage for Grand Staircase Escalante. You can see the layers, or steps, that make up the staircase. You look out across a low area and can pick out the steps or cliffs which rise from it. Low down are the Chocolate Cliffs then behind them rise step by step: the Vermilion, White, Gray and finally Pink cliffs. Once you get down into the park itself, you are too close to differentiate the “steps”. We had glaring sun mixed with lots of clouds so our photo isn’t the best but you can at least make out some of the steps. I guess we need to keep wandering back there until we get the clear, colorful panorama shot we’d hoped for.