We visited Zion about 5 years ago but were cycling back to check out a possible site for our travel club’s 2020 reunion. John first asked why I booked four nights because we’ve been there – “What are we going to do?” Once we were there, he was totally happy once again. It is a beautiful, beautiful park with hiking trails for people of all skill levels, an easy and efficient shuttle system (free), and more to do than we got done in those four days. Why go back to Zion, indeed! 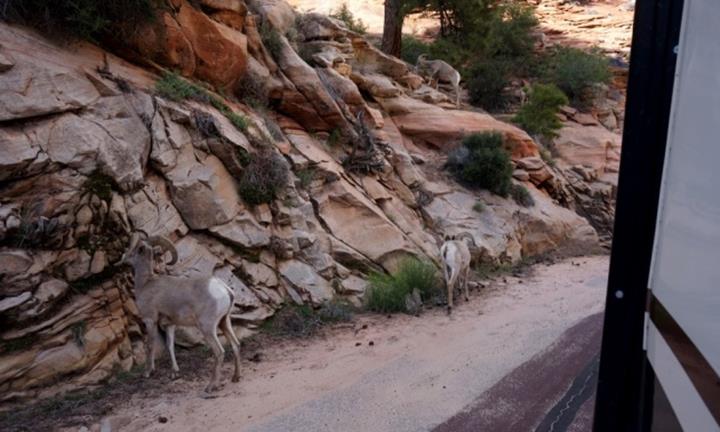 We came in from the east side this time. We visited this side of the park last time but that was in the car, not the RV. Many people never even see the eastern side of the park as you have to pay to go through the tunnel if you are in an RV or wide vehicle. People swing around on the highways to avoid that. We were coming in from Kanab so we opted to take the short, 30 minute drive in from the east. It’s lucky we did because we hit a traffic jam. WHAT, you don’t like traffic jams? Well, we usually aren’t too fond of them either, but this time the traffic backup was due to a herd of Bighorn Sheep in the road… and next to the road… and bounding up the cliffs near the road. Very cool! The picture above was taken out the window of the motor home. You can see the side of it to the right in the picture. We saw people getting out of their cars and tracking the sheep to get even closer shots but we figured ten feet away was good enough.

It was a rough winter for many parts of the country and Zion was no exception. Several of the trails were closed. We knew some were closed due to high water from the snow melt. What we didn’t know was that there had been some major landslides that took out some of the most popular trails. We were greeted with that reality on our hike to the Lower and Upper Emerald Pools. We made it to the lower pool but huge boulders and total destruction of the trail just past the waterfall made it impossible to continue to the upper pool and hanging garden.

We didn’t do the heavy duty hikes this time. We were not up to climbing up to the lofty heights of Angel’s Landing (though I could see John thinking about it from time to time) and The Narrows was closed due to high water. With several other trails out of commission, we opted for a few easy ones and more wandering play time. 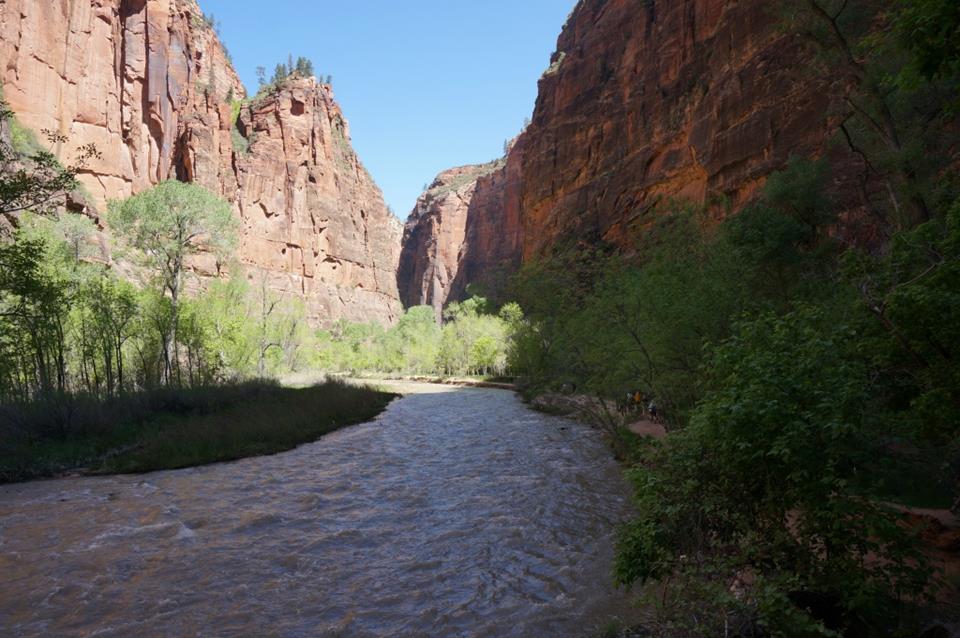 Riverside Walk (to the Narrows) – This is a beautiful, lush, paved and partly ADA accessible path. It takes you from the last shuttle stop in the canyon along the Virgin River to the lower end of The Narrows. We hiked it (and the Narrows) years ago in the fall but it was drastically different this time around. The Virgin River was over her banks in several places and the sand bars we walked on and hopped around five years ago as we headed up canyon into the Narrows were totally under frothing water. The upside to springtime hiking was the waterfalls cascading down the sides of the canyon along the trail and the lush plants along the valley floor and clinging to the rocks overhead.

Lower Emerald Pool – We hiked this trailed last time too. But unlike last time the trail past the waterfall at the lower pool was closed (see “Trail Damage” above). We were still able to follow the trail under the waterfall and feel the mist as it blew back on us. 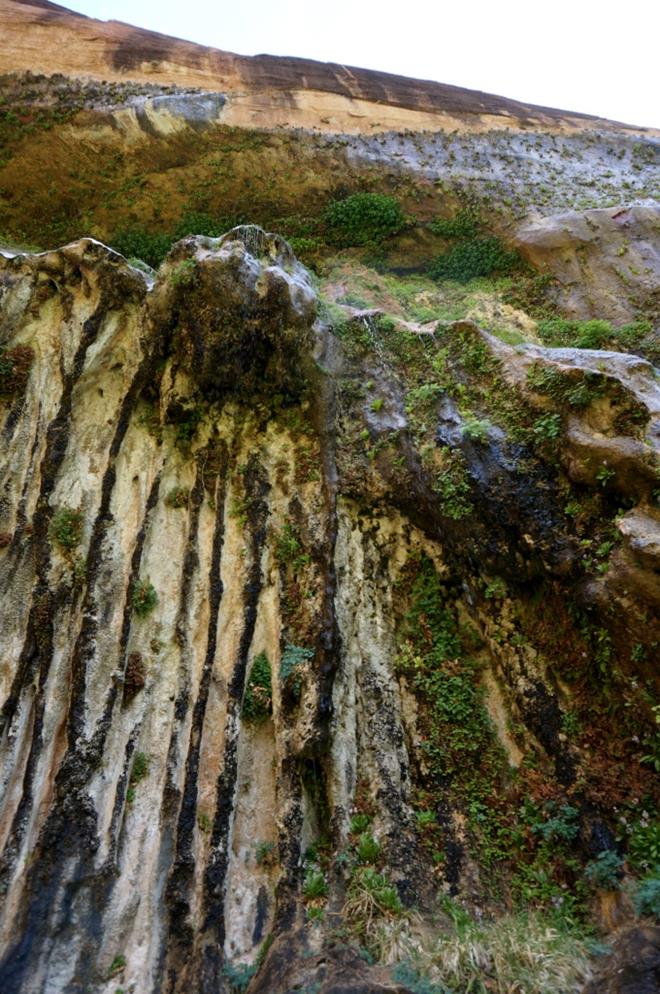 Weeping Rock – We did this short trail last time too. But this time the water really flowed and the hanging gardens were more lush and abundant.

Looking back toward the start of the Watchman Trail

Watchman Trail – This is the first time we hiked this trail. It’s a very nice trail with terrific views of the cliffs. You can get bird’s eye view of Springdale too. I’d classify this as a moderate hike. There was a decent elevation change but once you reached the rocky plateau, you could get great views both up and down the canyon. Someone told us it was a great place to watch the sunset but we couldn’t wrap our heads around hiking back down that trail in the dark even with a flashlight.

We knew that researchers along the Vermilion Cliffs were tracking a pair of their condors that had wandered up to Zion National Park. What we didn’t know was that they were nesting there. One of the Rangers at Zion had information on the condors so we picked his brain. The nest is way up on the cliff wall near “Minotaur Tower” at the “Big Bend” stop on the Zion Shuttle. The park has a clear photo directly into the nesting cavity and a video of a “nest exchange” maneuver on their FaceBook page. These were taken from somewhere on Angel’s Landing. You cannot see into the nest site from the ground and we weren’t hiking up that cliff to get a better a view so we staked out a spot next to the shuttle stop and waited. We did get to see the condors taking turns tending the nest. They had an egg and the Rangers estimated it should hatch within days of us leaving the park. This near miss is OK. The only visible difference would have been more frequent switching of the adults as they worked to feed the hatchling. IF the pair successfully raises the chick, it will be one more “wild” condor for the researchers at Vermilion Cliffs to capture and tag and it will be one more step toward the recovery of the California Condor. 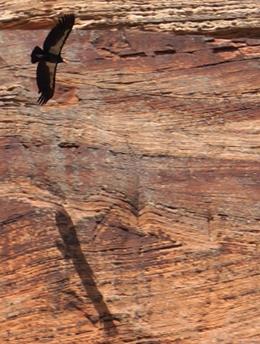 That big IF is hanging out there. You see, this particular female nested two years ago with a different male at a different location (Zion’s FaceBook page has that story). We were told that they sat on the egg and hatched the chick but the male went out hunting for food, ingested lead, and died. The female couldn’t keep the baby alive without the help of her mate and the chick died. Condors mate for life… well, her previous mate was no longer alive so she apparently went back to Vermilion Cliffs, found another mate, picked a nest site in Zion and tried again last year. As far as observers could tell no egg laid or chick produced. They returned to the nest again this year and all signs indicate that a baby condor is on the way. We are rooting for this pair and hope they are successful this time around. It would be awesome if condors could be seen regularly in Zion. Bring your best spotting scope or binoculars because these birds fly HIGH! The pictures above were taken with our telephoto lens then zooooooomed in. In the photo on the right, can you see a tiny bit of “whitewash” on the cliff below the nest? – NO WAY were we able to pick that out ahead of time to locate the nest. We found the nest site when the condor flew into it.

Just outside the entry to Zion lies the little town of Springdale. It has numerous little restaurants and shops, hotels and ONE RV campground… guess where the RV travel club will be staying if they choose this location? Luckily it looks like a nice campground that is close to a shuttle stop, has a pool and community picnic shelter and some of the sites are right on the Virgin River so it can lull you to sleep at night. During the tourist season a free shuttle runs through all of Springdale with its northernmost stop dropping you just outside the National Park boundary. You walk across a little bridge, through the entry station for the park and you are at the visitor center and stop #1 of the free shuttle that runs the length of Zion canyon. It’s super easy to get around.