I include these “Trials and Tribulations” posts not to complain but because living in an RV is not all happy wandering and exploring with no worries. Sometimes things don’t go the way you want them to but we do survive and carry on. I figure we could be having problems with a stick and brick house or with a house on the road. I choose road every time.

This time there was a problem with the dump valve on our black water holding tank (this is the one with the poo in it for those that don’t RV). We have an electric “Auto Drain” that rolls open that valve with a push of a button so we don’t have to crawl under the RV every time we need to dump that tank. It was super easy and convenient… until… about a month ago, ours stopped working. John (NOT a tool man) RV dude pulled out the paperwork for the auto drain, crawled under the rig with his tools and did some troubleshooting. Once the auto drain was removed from the pull lever, the Auto Drain worked fine. The pull lever, on the other hand, was extremely difficult to pull. This is not good. There is only so much space for, ummm, poo, before you have to dump it somewhere. We DID NOT want the whole system to lock up when it was full so we started hunting for service.

We set up an appointment in Page, AZ but the shop became swamped when all their backordered parts came in the day we were scheduled for service so they had to do those rigs first (the other rigs had been waiting a while). We figured, no worries, we’ll roll along and find another repair shop. HA! The shop in Kanab said “No, we draw the line at waste tanks. We won’t touch them.” The shop in Hurricane (and a few others) said “sure, we can fit you in a month or so from now”. The shop in St. George said “two weeks” – They had good reviews so we signed up and wandered off to Zion and back to Best Friends Animal Sanctuary to play while we waited.

Our system during this month and a half with a recalcitrant dump valve was for John to crawl under the back of the rig, lay on his back in whatever we were parked in and pull the lever (sort of a human “assist”) while I operated the button for the Auto Drain (I got the clean, cushy job). It was not convenient but it worked. I tried to talk John into letting me have a go at replacing it – NO. I watched YouTube videos about how to do it and checked with friends that had done theirs. They said it wasn’t bad. John said NO. So, he continued to crawl under and I pushed the button.

We finally got to the repair shop in St. George, Utah, they took the rig and we took care of errands. It wasn’t long before they called for us to pick it up. When we did, they explained the valve and the rubber valve seals were all fine. They just needed to adjust something to make it close properly. They said they had run it in and out with the button four or five times and it worked fine. OK… we weren’t having trouble closing it by hand and we had asked for a new valve (the ONLY reason we were in St. George) but we went with it (not tool guys, trust the experts… right?) Back to camp we went where we could test it. John hooked us up and opened the valve – WAIT – the valve won’t open… not even once. What the heck did we just pay a bunch of money for?

We called the shop, drove it back, and waited. They asked if we had dumped the tank… which they would know if they had taken apart the valve and checked the seals the first time like they said they did. We again answered yes… and waited. Before long the tech came in and told us the problem was NOT the valve but that the gears inside the Auto Drain were stripped. They didn’t have parts so they cut the wires on the Auto Drain, capped them off and gave us the pieces they removed. They said now the valve would work manually and would we like to have them install a cable system that would pull the valve for us – (NO, we didn’t trust them enough to have them do anything else).

Welllll, I thought about that. If the gears were stripped, how could they have run the valve in and out numerous times that morning using the Auto Drain? The Auto Drain worked for us when we took it off the pull handle for the valve. The tech said it worked for him that morning. But now it doesn’t work. If the gears were stripped, they were stripped at the shop. I told the manager that I was concerned about the “facts” they were giving us. He agreed it sounded like they lied to us. I told him I wanted a new valve put on as we originally requested on the service order. We would pay for the valve but not the labor as we had already paid for labor that obviously hadn’t happened. 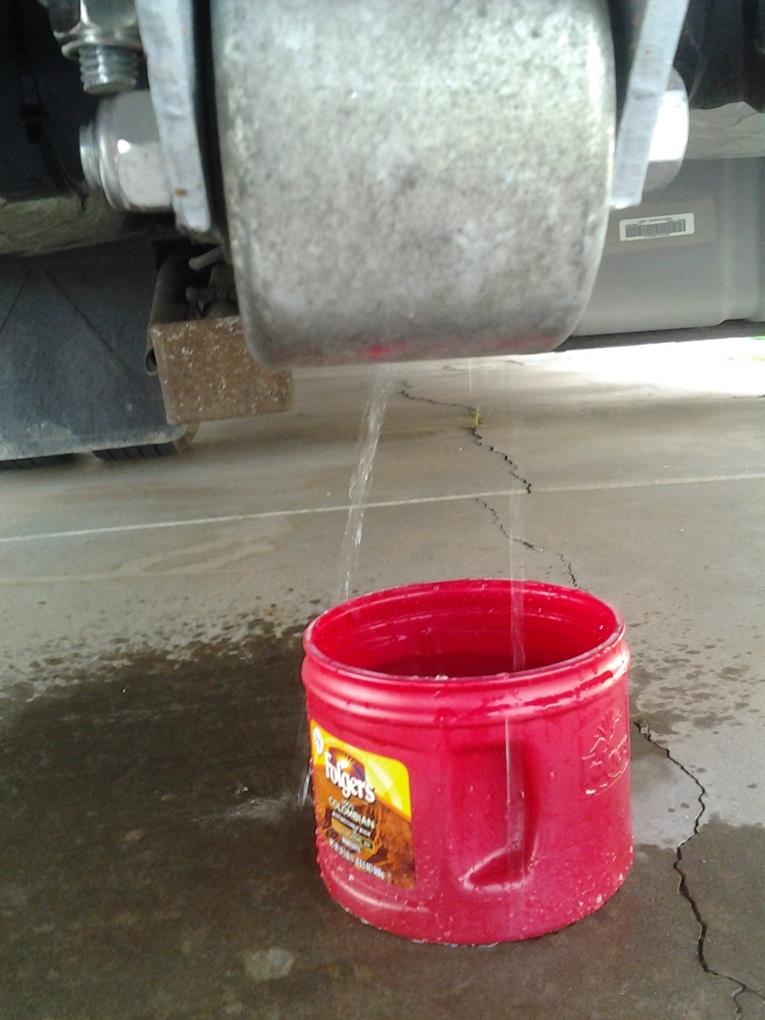 Our NEW valve in action (in the CLOSED position)

The tech was definitely not happy with us but put a new valve on and said he tested it and everything worked. Back we went to camp to check everything out. We turned on our flush valves and the water POURED out of that valve – when it was in the CLOSED position. We called the shop, told them it leaked, they said they had no techs and we would have to come back when they opened at 9am… then hung up on me (NO, I was not nasty or complaining). I’d like to think they were in a hurry to catch the tech and ask a few pertinent questions, but maybe not.

Now we have NO TOILET. Anything we put in that toilet was going straight out to the ground. The campground only took self-contained units as THEY had no toilet so we couldn’t even plan on middle of the night jogs to a bathroom. We didn’t want waste dumping in the campsite so we put a bucket under the valve to catch the last of the water and put a coffee can in the bathroom and headed to dinner… and used the restaurant’s bathroom. We visited that little coffee can several times overnight and had not-so-nice thoughts about the service center every time we did. In the morning we dumped the contents of the coffee can down the sewer drain in our site and went to breakfast… and ran for the restaurant’s bathroom.

At a quarter to 9, we were at the shop and showed them video of water spewing out of the “new” “working” valve. They took the rig and I followed it. I explained that due to the difficulties with our last two visits (and the loss of any semblance of trust), I would be watching the repair. They sent out a different tech. He crawled under the rig and I sat on the steps nearby. He swapped out the valve, put it all back together, tested it extensively and apologized for the problems we had. I tucked the pieces of our Auto Drain into the rig, we shook hands and headed out. All very civil… No lawyers required.

We had such a fun time with this that MAYBE next time John will let me try to fix it… but probably not.

Our most recent Trials and Tribulation over, we hit the road and started discussing where to go next because being the happy wanderers that we are, we had no clue which direction to point the nose of the rig. So we did what many RV’ers do… we headed to Walmart. By the time we finished shopping and had lunch, we had a plan.

This entry was posted in Trials and Tribulations and tagged Utah. Bookmark the permalink.