Ah, the trials and tribulations of being a full time RV’er. So many people tell us how we are living the dream, traveling, relaxing, no worries in the world. We love our traveling life but there are some bumps in that happy RV’er road.

Many people that live on the road head back to their “home” state once a year to do all those medical checkups that keep piling up as you get older. John and I did the same late August and early September this year but there were a few appointments that couldn’t be scheduled in our Maryland timeframe. We had to set them up for after our Travel Club Reunion in Charleston which meant we would be heading back north. Not our first choice but not a real problem. We gave ourselves a leisurely week to wander back north, get the appointments done then roll out again. It was a good Plan but… It didn’t happen.

While we were at the reunion our 12 volt system crashed. We had newish batteries but they just didn’t seem to be getting power. A look at the batteries and we could see where the connections were actually cracking in half. This would have been really bad except Phoenix Cruiser factory reps and repair guys were at the reunion and pieced our power connections back together which led us to a new plan that we would stop in to Elkhart for a new controller after our quick stop in Maryland. However, there was, yet again, an expected game delay.

I stumbled, tumbled and crashed on a nice level section of pavement at the reunion. Luckily it was on the last night so all we missed was the farewell BBQ dinner. As I lay on the ground writhing in pain, we discovered we have some awesome medical personnel in the travel club. They took care of me until the ambulance arrived and carried me off to the hospital in Charleston. It was a severe dislocation of the right elbow, torn ligaments, bone bits, the whole nine yards. They knocked me out and put it back in place and x-ray-ed it AGAIN before putting it in a splint/cast and sling, giving me drugs and sending me on my way. I have medical coverage so most of the cost of the emergency and the ambulance fees were covered. However, my current plan is an HMO. The Charleston ER doc was going to have me seen by their Orthopedic Surgeon right away. I knew my plan wouldn’t consider THAT an emergency so we had to hightail it back to Maryland. John had to do all the driving since I only had one arm and was on pain pills. We were able to do the medical service dance fairly quickly since it was a severe injury: Primary Care Doctor the day we hit Maryland, Orthopedic Doctor the next day X-ray, new bigger splint/cast and new sling, Scan, Doctor (oops, bone bits and tendon trapped in the joint from when they reset it in Charleston, referral to Surgeon SAME DAY (quick one hour drive to Baltimore to see him before they closed), Surgeon, X-ray, Surgery within days, X-rays (I probably glowed by that point), new HUGE splint/cast and new sling (aka the Great Blue Whale), Surgeon, cast off, new bionic cast, Surgeon, rehab… RUN AWAY!!! 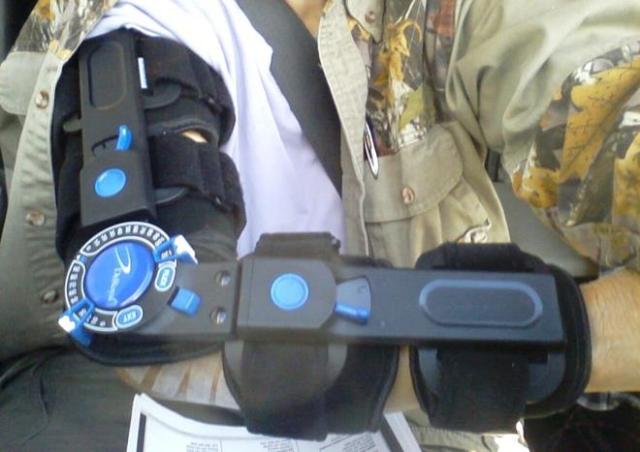 All of that was accomplished with the other doctor appointments for both John and me sprinkled in, freezing cold setting into Maryland, campgrounds closing, etc. We watched and fretted over our batteries while we waited. We were sooooo ready to roll out by the time I was released. We were supposed to be someplace warm, not sitting on the road in Maryland without hookups and a faulty electrical system. After consulting with the surgeon, it was decided I could do the rehab on my own on the road so we pointed our noses to the even colder north-northwest and headed to Elkhart.

When we arrived in Elkhart we parked beside the snowdrifts at Walmart until it was time to hook up at the factory and wait for repairs. The good news is that it was just our connectors corroding and we didn’t need a new controller. They were able to fix it quickly, swap out our fogged window and do some minor repairs in just a few hours so we were only in Elkhart for one night. The bad news it, it was getting even colder.

Once all the bits were back in order for both me and the rig (or as good as they got at that point), we aimed south and started looking for a volunteer job someplace warm.

We made plans, changed plans, adjusted plans, made new plans, and finally just winged it not knowing where we would be or what we would be doing. In the end, we settled into a beautiful volunteer campground with super friendly volunteers at Santa Ana National Wildlife Refuge. And it was blissfully warm.

We are still happy campers after all!

This entry was posted in Trials and Tribulations. Bookmark the permalink.