Tillamook and the Cheese Factory

We needed to pick up some packages from the post office so we headed into Tillamook. It was a nice drive along bays and forests, across a few rivers and past quite a few dairy farms. Tillamook is located on a lush plain that gets over 90 inches of rain each year (that’s ninety inches – NOT a typo).

Mountains flank the area on three sides and the ocean and bay lie to the west. The number one employer in the county is the Tillamook Cheese group. They employ over 25% of the people in the county. They make lots of cheese. Literally tons of it. Cheese is made from milk. Milk comes from cows. There are tens of thousands of cows in Tillamook County munching away on all that lush grass and generally doing what cows do. Which brings us to…

It was a cool day so our car windows were up but we noticed it was getting more and more stinky as we neared the town. It wasn’t until we opened the car doors at the post office that it really hit us though. And it hit us. Hard enough that John blurted out “we are NOT going to live here”!  We don’t know if they had just spread a few tons of manure on the nearby fields or if Tillamook always smells this way but it is definitely off our list of places to live. Now, don’t get me wrong. I’m not against a little cow stink. I rented a place on a cow and pig farm way back when I was in the army so I know that you eventually get used to it and do not even notice the smell. I explained this to John but he was hearing none of it. I’m OK with that. It’s a big country and I’m sure we can find somewhere with a few thousand fewer cows.

Since we were in town, we decided to roll up Hwy 101 and check out the Cheese Factory. They have a huge parking lot with space for RVs and buses. It was pretty empty when we were there and that’s good because we got to spend our time and read everything and watch massive amounts of cheddar cheese being made and packaged.

The factory has the upstairs viewing areas, a cheese sample counter, little deli shop, large gift shop, restaurant type counter, dining area and a huge ice cream counter… because it isn’t just cheese that is made out of milk.

We started with the free, self guided tour. First up are lots of signs downstairs explaining the farmer-owned status of the company, what it means to be a dairy farmer, how much milk a cow gives, etc. They also have a few looping videos with benches to plop on to watch. We watched and read everything they had then headed up to the observation areas.

I think we did the tour backwards. If you turn left at the top of the stairs, you see the first part of the process. We, of course, turned right and got confused. Here’s the order we should have seen it in:

First you encounter an ice cream counter. If it is open, buy some. They hand make their waffle cones right there (you can watch them do it downstairs). Yes, I know it is expensive. It is also very good ice cream and the waffle cone was so light and crispy, I was in ice cream heaven. I had the Tillamook Mudslide: “rich chocolate ice cream with chocolate fudge chunks and decadent fudge ripple”… oh yeah. I tell you to buy it here because it would have been nice to munch while we watched the cheese being processed. The upstairs ice cream counter was closed when we were there so we bought our ice cream downstairs after we ate lunch. I should have skipped lunch and pigged out on really creamy, really chocolatey ice cream in the crispy waffle cone… mmmm. Wow, nice memories. We may have to stop again on the way out of town. After all, they have room to park our motorhome. Not many ice cream shops have that… I mean cheese factories.

OK – Back to the tour. The first part was not really exciting the day we were there. There are lots of closed vats with hoses and dials and we assume milk or cheese curds were in them but all we saw were the vats. This part of the cheese making process is pretty much all automated. A few humans monitored the equipment and tested things periodically but all we saw was gleaming metal and steam. Hmmm. There is one big open vat down on the floor where they make their flavored, small batch cheeses but it was all clean and shiny. Apparently we were not there on specialty cheese day.

It took us a bit to read all the signs, watch more videos and and figure out what was going on in the far right side of the cheese making room. There are tall square metal towers that we figured out are full of cheese curds (which were made in those shiny vats a few feet back). They get compressed into big forty-some pound blocks of fresh cheese which then drop out onto the conveyors. A human bags each block and sends it to a huge vacuum sealer. The cheese is sealed and rolls away to be boxed before going to the warehouse where it waits to be old enough to be labeled “aged cheddar”. 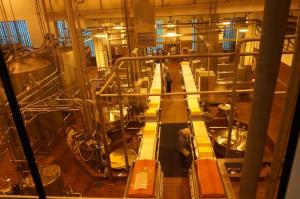 When you first look in the packaging room you’ll think Wow! that’s a lot of cheese. We watched dozens of 40 lb blocks of cheddar roll in from the aging warehouse. They were sliced and weighed and trimmed into smaller blocks before they rolled down the line.

One machine bagged them and the really cool looking octopus machine heat sealed them. Then they rolled along to be trimmed, heated again, cooled, then up the spiral roller thingy to the packing room. This was cool.

We walked back and forth and watched block after block of cheese get processed. When we finally figured out how everything worked, we headed downstairs for some cheese samples, lunch and ice cream.

John and I are a bit plebian when it comes to “tastings”. We can’t discern the undertones, overtones, dial tones, nose, toes, etc. of wine, beer, chocolate or cheese. Tillamook is supposed to be very good cheese. We did not do a direct taste test but my samples didn’t make me think, “best cheese ever”. I DID enjoy the squeeky cheese sample. This is basically the cheese curds before they get pressed into blocks and aged. It has a softer “tooth” to it and actually squeaks when you chew it, which was fun and why I liked it. It actually has very little flavor. Ironically, this was higher priced per pound in their cheese store than the aged cheddar that has so much more processing time. Go figure. We checked the factory price for cheddar against one local food store and it seemed that the factory was a tad cheaper but not discount priced. They cut out the middle man and kept their share of the profit. Oh well, we had just bought cheese anyhow.

We had an OK lunch there (a tad expensive) and I got the wonderful ice cream mentioned above. We got to watch them make those yummy waffle cones too. They have six or eight waffle irons going at one time. The attendant opens the waffle maker, quickly rolls the waffle onto a metal cone mold and moves to the next one. She cycles back to take all the waffles off the molds and drop in more batter before starting over at the other end. It was fun to watch and it smells sooooo good.

We had never been in a cheese factory so it was interesting and well worth our stop. It would be cool to see them actually hand make cheese in their specialty vat. We tried to see this at cheese factories up in Vermont and New Hampshire last summer but never seemed to be in the right place on cheese making day. If this is something you really want to see, a call ahead may help you plan your trip.

Otherwise, go and check out the cheese… and get the ice cream!

This entry was posted in Miscellaneous and tagged Oregon, Tillamook, Tillamook Cheese Factory. Bookmark the permalink.