We weren’t in camp very long before we snatched our camera and headed for the beach a stone’s throw from our campsite.

All I can say is…WOW! Big sun, big sky, big ocean. Absolutely gorgeous. Driftwood abounded on the beach. Entire trees were half buried in the sand. Others rocked, rolled and twisted in the surf. It was fun to watch. 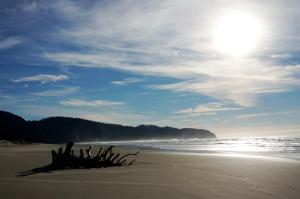 We walked north along Netarts Spit toward Cape Meares. As we walked we got a closer view of a rock formation just off the point. What should we call it? Holly voted for Kissing Turtles, which is exactly what they looked like. We later learned that they are actually called Three Arch Rocks. I don’t know about you, but Kissing Turtles gets my vote. 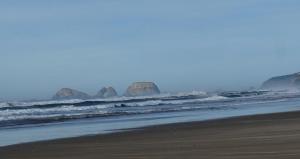 On our beach walks we’ve encountered some interesting debris, like this float that looks strangely like Kermit the Frog. If a human turns green when they’re seasick, what color does a green frog change to? 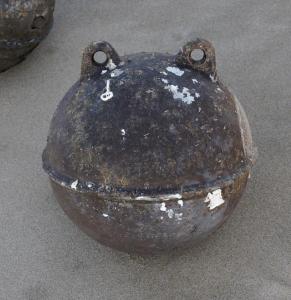 We had a lot of fun watching these wading birds running to and fro searching for a morsel under the sand. They ran so fast their little toothpick legs were a blur. They usually went in different directions. But when the surf came too close, they lined up and ran up the beach. Based on my (brief) research, I’m going out on a limb and say these shore birds are sanderlings, a member of the sandpiper family. 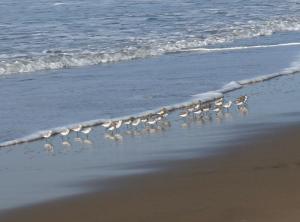 On your mark! Get set! RUN!

The North Trail starts at the Cape Lookout State Park day use parking lot and ends at the trailhead for the Cape Trail and South Trail which is on the Cape Lookout ridge. One way distance is 2.3 or 2.6 miles depending on which trail sign you want to believe. Let’s just call it 2.5 miles one way or 5 miles round trip.

One fascinating thing we saw was this tree (among others) that appears to be standing on its tip toes. It’s not as odd or mysterious as it seems. A tree falls and dies. Seeds sprout and seedlings grow on the now decaying log. So do mosses, ferns, lichen, and other plants. The seedling’s roots reach around the log, seeking a foothold on firm ground. Once established, the young tree continues to grow while the log continues to decay until there’s nothing left. The dead tree “nursed” the seed and the seedling, giving them nourishment. These dead trees are called nurse logs. Appropriate, don’t you think? 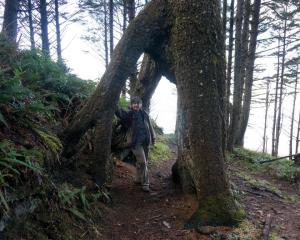 The picture below is another great example of what a nurse log begat, two trees whose roots intertwine. Very cool. 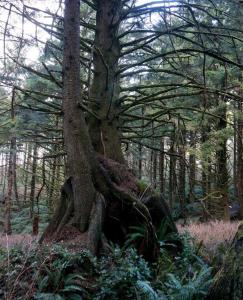 We encountered some man-made features too, like this neat swinging bridge over a stream 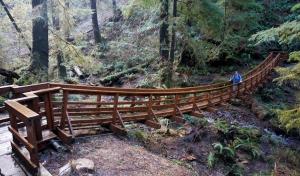 and this not-so-neat “detour” around a drainage sluice. The trail runs to the left of the raised area, a “curb” of rocks held together by chain link-type fencing. Not very pretty, but I understand why it’s there – to prevent erosion of the trail and, more importantly, the hillside. 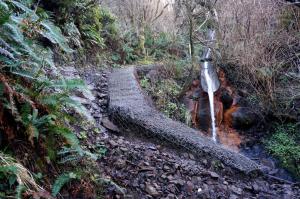 Once in a while, we got a peak through the trees. One of those peaks gave us this view of several waterfalls cascading down a cliff. Cape Lookout is in the distance to the right. Although the ocean appears to be encased in light fog, it’s really just sea mist blown off the wave tops by the wind. 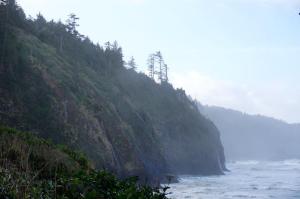 The Cape Trail leads you to the point on Cape Lookout a hundred or so feet above the ocean. One way distance is 2.3 miles or 4.6 miles round trip.

The day we hiked the trail was very muddy and slippery in spots. Of the three trails that converge at the trailhead (North Trail, Cape Trail, South Trail), this was by far the most strenuous hike. The mud didn’t make it any easier. I slipped quite a few times and I’m (usually) sure-footed.

There were quite a few places where you got good looks at North Beach, Netarts Spit, and Cape Meares, but it was windy and the sea mist kept us from getting a good, clear view.

We had to stop when we got to Pirate’s Cove where we watched the surf crash into the cliffs below. Our final destination was the top left. The trail did not go all the way down to the water. 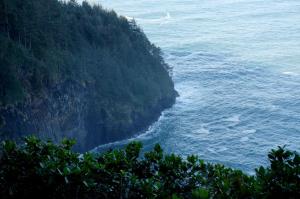 Sometimes, it seemed like the vistas were endless, like this one. The clouds just kept going and going and going. As did the coast and the ocean. Makes you feel kinda small. 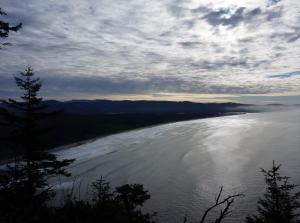 The South Beach Trail follows numerous switchbacks from the trailhead on Cape Lookout down to the beach south of the cape. One way distance is 1.8 miles or 3.6 miles round trip.

It was a nice cool, sunny day – a good day to take a hike.

The grade on the first mile or mile and a quarter wasn’t too bad and the switchbacks were pretty far apart. It was pretty easy going. But then the trail got steeper, more rugged with lots of tree roots to trip over, and the switchbacks came closer together. The folks maintaining the trail built a bench on a nice overlook where we could rest, especially important on the way back up! As our granddaughter Chloe would say, “This looks like a nice spot to sit and have a snack!”

On the way down, Holly spotted a small stream flowing from the base of a tree. It’s pretty amazing how accommodating nature can be. Instead of fighting for the same piece of dirt, they shared it. 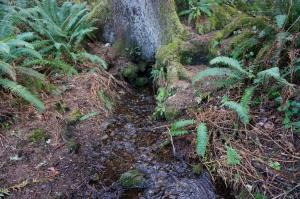 Stream flowing from base of tree

On those occasions where there were breaks in the trees, we got spectacular views of the beach and Cape Lookout. No wonder I keep being drawn to the ocean in these parts. 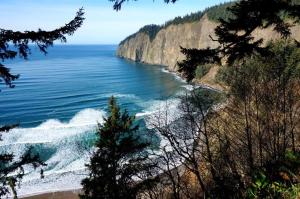 View of beach and Cape Lookout from South Trail

When I reached the beach, I noticed some trash. Because the North Beach can be reached from the campground, I figured camp hosts and other people picked up trash along there. Because South Beach is more remote, I figured there were fewer people to collect the trash. It didn’t look so bad at first so I started gathering it up into a pile. I planned to put it in a trash bag and carry it back with me. But no sooner did I start collecting than I started seeing more and more trash, too much to stuff in one trash bag, much less lug back up the hillside. In the end, I hauled up about 10 pounds of trash which barely made a dent in what was along the beach. Much of what I found was to be expected – plastic and Styrofoam floats and bobbers, fishing line, plastic bottles (way too many of those), and lots of bits and pieces of hard plastic (some as small as a fingernail, some a large as a picnic cooler). But I also found a golf ball and pancake turner.

Still, the view of the beach and cape were awesome. Just look at that sky. Since we hit the Oregon coast, we’ve had as many, if not more, sunny days than cloudy ones. Even on mostly cloudy days, the sun will usually make an appearance. If you look closely at the cliff, you can see lighter areas where the rock face calved off the cliff. We saw the results of a fairly recent rock slide which you can’t see in the picture. The rubble formed a mound beneath the slide. Over time, the sea will erase the rubble. 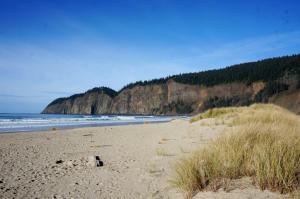 On all our beach walks we found dead birds, usually nothing more than a clump of feathers and bones. Quite often, we’d find 4, 5 or more dead birds clustered within a 20-30 foot radius. But while walking along South Beach, I found an intact dead bird, probably a Cassin’s Auklet or a Common Murre. According to the Oregon Department of Fish and Wildlife (ODFW), the birds they’ve examined have been “extremely emaciated, likely related to exhaustion and starvation caused by exposure to cold temperatures and heavy wind.” The one I found did not appear that way to me. One more mystery served up by Mother Nature.

On the way back up we did a little geocaching, locating 5 caches. That we did this on our way UP had nothing to do with the fact that we had to stop quite a few times to take GPS measurements and hunt for caches. Catching our breath was just incidental. Riiiiight! If you don’t know what geocaching is, you can learn more here.