We spent an enjoyable day at the Duluth waterfront. There are several large gravel parking areas right next to their park. They charge parking during events but it was free when we rolled in and there was plenty of space to park the RV and tow vehicle without unhooking. We spent less than 36 hours in Duluth so we’ll just note a few things we saw on our whirlwind tour that aren’t covered in another post.

Duluth Bayfront Park – lots of grass, plantings, walkways, and a band shell open to the lake. We saw listings for all kinds of concerts and festivals that are held there. Nothing was going on when we were there but people would go and sit and enjoy the beautiful view.

Playfront Park – is a very large and very cool playground that was teeming with kids and parents and runs along the edge of the Bayfront Park.

Duluth Family Center – between the Playfront Park and Band Shell is a low building with indoor gathering space, craft materials, loaner games, and outdoor activity toys (soccer nets, toss games, etc.) that people can come to play as a family group or just a group of friends. They can also loan things out for neighborhood gatherings. It gives older kids a safe place to hang out, chill, and generally goof around without the watchful eyes of parents (though there is an activity director on site to maintain control if needed.) I thought this was a really cool community thing in this day and age where kids don’t even get to go outside much anymore. 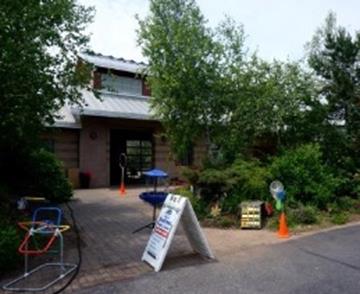 Great Lakes Aquarium – We really like the River Otter pair. They seemed to enjoy interacting with the people through the glass. We don’t have many pictures that aren’t a blur because they hardly stop moving and if one lies down to rest, the other one pounces and the play begins again until they are both exhausted and run into their den for a quick nap (camera in den so we could see them napping). If we lost track of Chloe, we just had to go back to the otter tank where she was hunkered down communing with critters. There were two floors of exhibits to discover and enjoy. While the aquarium is a bit smaller than most we’ve been to, it had plenty to see and do, and quite a few exhibits were different than what we’ve seen.

They had a special shipwreck area that had the stairwell from the steamer America as well as information about wrecks around the area. As we wandered the room reading the displays, we spotted a tank in the corner that had a very active, very beautiful, octopus so we spent a bit of time visiting with her (or him… or it… no clue). 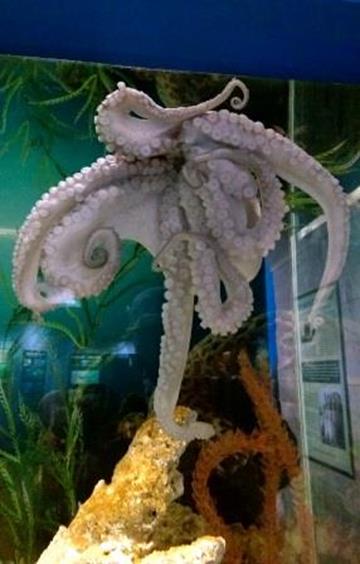 We thoroughly enjoyed their many hands-on activities such as:

Pet a Sturgeon – this was a first for us. We’ve pet stingrays in touch tanks before but you don’t get a lot of large tanks of sturgeon you can stick your hands into. It was a deep tank and they weren’t totally cooperative. They actually seemed to glide near the surface where people were waiting then dip just before the touch. Patience did pay off for most people though. The picture is of live sturgeon resting in the tank. 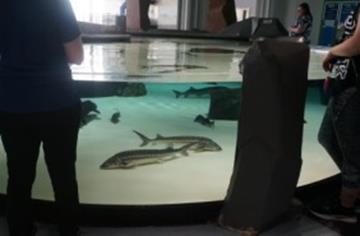 Pet a Jellyfish – another first. I’ve poked dead ones on the beach but never actually stroked one as it swam… floated… bobbed (what DO they call the thing that jellies do?) 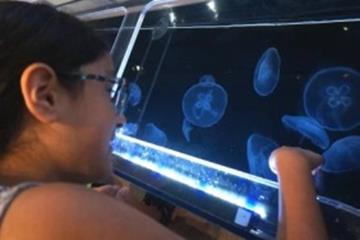 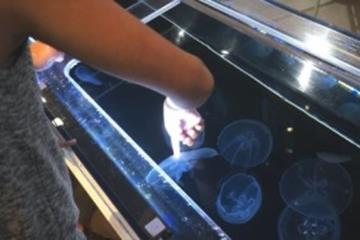 Pet a Bottom Feeder – well, OK, this one wasn’t hands on for us. It was done by volunteer divers that go down in the tank and physically put the food in the mouth of some of the big bottom feeders that don’t always get to the food quick enough. The fish seemed to enjoy the attention and little belly rubs. We got to watch from the benches lined up in front of the big tank. 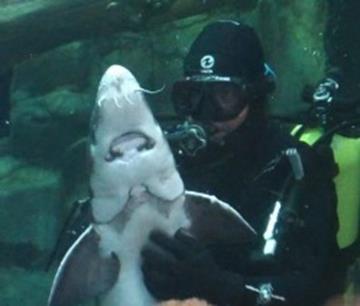 Lock a Boat Through the Sault St. Marie (and quickly rescue your boat before it rams another one). The aquarium has a really nice hands-on model of the Great Lakes and the Locks. It was cool to see the Keweenaw Peninsula and Pictured Rocks labeled on their model as we’ve spent time in both areas. It was also cool to see two tweenagers totally engrossed in the workings of the locks and water systems. I love it when they learn stuff without realizing it. 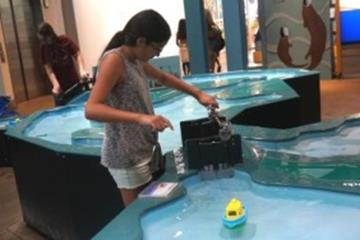 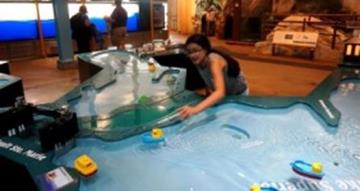 Canals and locks and dams

As usual, we spent the entire day at the aquarium. Warning, there is no food in there. We didn’t bring our lunches and didn’t want to leave so we had to resort to expensive packets of nuts and odd foods that they stock in their gift shop. And yes, there are seriously cute stuffed critters in the gift shop.

This entry was posted in Museums, Science. Bookmark the permalink.