The downtown area near the Mark Twain attractions has been nicely restored. Many of the buildings were there when Mark Twain lived here. So when you are wandering from place to place you do get a feel for what the town was like back then.

Just outside of town is a high bluff called Lover’s Leap. Each Lover’s Leap has its own unique story. In this one, an Indian brave and an Indian princess from warring tribes fell in love and were forbidden to marry. When the brave was caught meeting the princess, her father ordered the brave killed. While being chased, the couple climbed Lover’s Leap. When they realized there was no escape they embraced and jumped off the cliff. 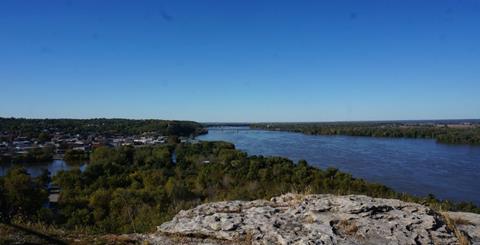 For the previous week or so of our travels we had heard warnings of flooding due to heavy rains in the watersheds of several rivers that drain into the Mississippi. I found it surprising that all this talk about flooding didn’t seem to faze the locals.

On the day we visited the Mark Twain Museum, we walked a block to the riverfront and saw this…

No worries though. It was only a small leak. Hannibal has five flood gates that they lift into place when the river rises. Since the river was more than 8 feet over flood stage, all five of the gates were in place and downtown was high and dry.

Two train tracks were on the riverside of the flood walls and were underwater. Another visitor told us the guard gates were down on one of the tracks and had been ringing its warning bells for days. I suspect that bugged the locals more than the flooding did.

If you were planning on taking your children or grandchildren to the playground, you had better make other plans. That is unless you want to get really wet. The playground can be seen in the left side of the photo. 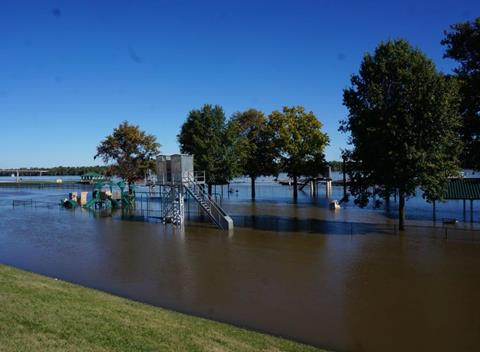 Later that day we drove up to Lover’s Leap where we got a much better view of the flooding. If you look closely you might see the levee and flood gates in the above photos.

This entry was posted in History and tagged Missouri. Bookmark the permalink.