The first stop on our visit to Mark Twain’s boyhood home was the Mark Twain Museum in downtown Hannibal, Missouri. Although I use the name Mark Twain, his real name was Samuel Langhorne Clemens.

Admission to the museum also got us into his boyhood home, Becky Thatcher’s home, Huckleberry Finn’s home, and Mark Twain’s father’s law office. More on these later.

The museum was interesting and informative. It also had some interesting collections, including original Norman Rockwell drawings.

I really liked the diorama of Mark Twain sitting in a chair surrounded by Tom and Huck. His stories do seem to bring the characters to life.

Several of Mark Twain’s books were “featured” in the museum: The Adventures of Tom Sawyer, The Adventures of Huckleberry Finn, A Connecticut Yankee in King Arthur’s Court, and Innocents Abroad. Brief snippets of parts of these books were accompanied by displays. Spoiler Alert: Some of these snippets give away key parts of the books’ plots. That didn’t bother me though. I have such a lousy memory I will have forgotten those parts before I get to them.

While we were wandering through the museum a large group of middle schoolers showed up. Holly and I scared the bejesus out of some of them too. We both like to read the signs and I guess we both stand real still. When we moved several of the kids standing next to us jumped. They thought we were part of the displays! I know we don’t dress like normal people, but we don’t dress like Tom Sawyer either!

I was very impressed with the Norman Rockwell display of drawings he made for one of the Tom Sawyer editions. He spent quite a bit of time in Hannibal getting a “feel” for the locale. He also spent time in the Mark Twain Cave. Art takes time.

We also saw beautiful pen and ink drawings from another artist for a different edition of Tom Sawyer. This edition of the book was published by Whitman Publishing Company in 1955. Paul Frame, an award-winning illustrator of children’s books, illustrated this edition. These drawings were on loan from a private collection and were displayed way back in their conference room. 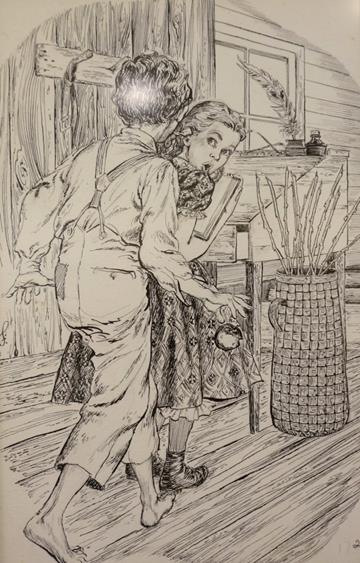 Mark Twain’s true love was Olivia Langdon whom he eventually convinced to marry him. He caught his first glimpse of her in a miniature carried by Olivia’s brother while both men were traveling on the Quaker City during its cruise around the Mediterranean. The observations Mark Twain made on this cruise formed the basis of his first critically acclaimed book, Innocents Abroad.

After finishing up in the museum we headed down the street. Our first stop was Mark Twain’s boyhood home.

Before entering the home we wandered through yet another visitor center. This one went back to before Mark Twain was born and gives you plenty of information about his real family.

Mark Twain’s life was filled with trials as well as tribulations. Mark Twain was a riverboat pilot for several years and helped get his brother Henry a job on a steamboat. Henry died in a steamboat accident less than a year later and Mark Twain always blamed himself for his death. 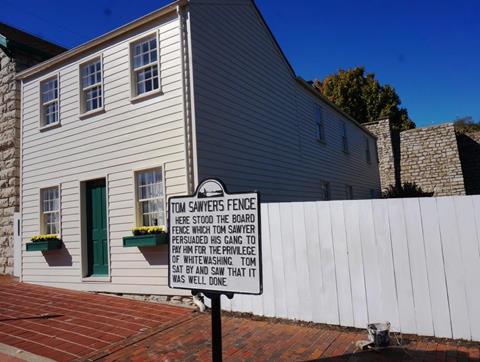 While Huck Finn may be a fictional character, he was based on a real person, Tom Blankenship, who lived in this house. The similarities between Tom and Huck are astounding. One of Tom’s brother’s, Benson, once befriended a runaway slave. He fed the man and kept his hiding place a secret for weeks. Both Tom’s and Benson’s personalities and actions played a prominent role in Huckleberry Finn.

Now we come to the love of Tom Sawyer’s life, Becky Thatcher who lived in this house.

This also happened to be the home of the first love of Mark Twain’s young life, Laura Hawkins. He was 7, she was 5. Although this young love never led to marriage, they did keep in touch. I loved this photograph of Mark and Laura all grown up. I wonder if he still had a thing for her. When she died in 1928 she was buried next to her husband. But the name on her tombstone read Laura H “Becky Thatcher” Frazer. There is a voice recording in the house of Laura telling the story of how Sam Clemens did flips and things to catch her attention when they met… which is the same story you’ll find in Tom Sawyer when he met Becky.

Sam and Laura (Tom and Becky)

Knowing what I know now about Mark Twain and his childhood, Tom Sawyer takes on a different meaning. Mark Twain is Tom Sawyer. Laura Hawkins is Becky Thatcher. Tom Blankenship is Huck Finn. The characters are more real because they were flesh and blood, not mere figments of Mark Twain’s imagination.

Once we were done with the self-guided house tours, we walked to the bottom of a hillside were we saw a nice statue of Tom and Huck.

The not so imaginary boys that made the town famous

This entry was posted in History, Museums. Bookmark the permalink.