As caves go, the Mark Twain Cave isn’t that spectacular. It can’t hold a candle compared to beauty and features of other caves we’ve been in such as Mammoth Cave, Wind Cave, and Jewel Cave. But this cave has something these other caves don’t – a connection to Mark Twain. Okay, his real name is Samuel Langhorne Clemens, but would you recognize that person as Mark Twain? Doubtful.

The Mark Twain Cave figures prominently in Tom Sawyer, which I’m currently reading, so don’t spoil it for me. The cave makes appearances in four other books by Mark Twain, but I’m not sure which ones.

We bought our tour tickets at visitor center. Because there were two large middle school groups ahead of us, we had to wait about an hour for our tour. Other than the gift shop there wasn’t a whole lot to look at. 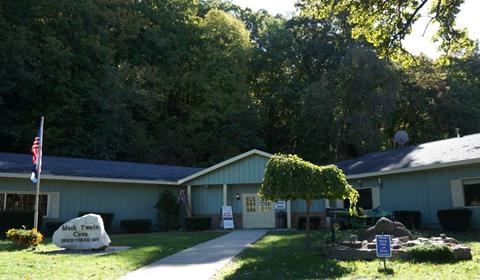 The two groups of about 45 middle schoolers each went into the cave ahead of us. I was worried that they’d make so much noise it would be hard for us to hear our guide. Fortunately that didn’t happen. As middle schoolers go they were reasonably well behaved.

Before we entered our guide pointed to a cave map with our tour route highlighted. She also gave us a few facts about the cave. There are about three miles of passages but our tour only covered about 5/8 of a mile. The cave is on one level with no tunnels or passages to upper or lower levels. Can’t get lost that way, right? There can’t be more than a few hundred little passages that all look the same. 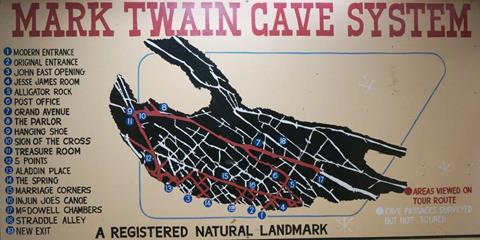 The cave entrance we used was the newest one, built for tours. There are three other entrances. Two are “natural” and the third was blasted out somewhat recently to make a circuit tour of the cave possible… and to coincidentally dump you out in that gift shop. The original, or discovery, entrance can be seen in the upper left corner of the photo. That would have been the one Mark Twain used as a boy. 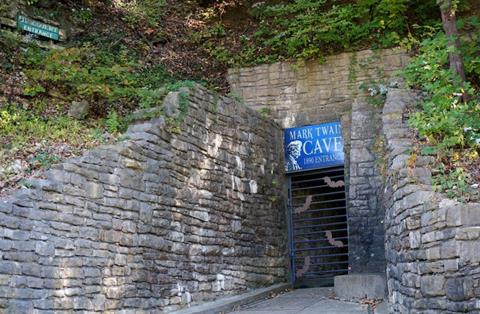 We didn’t have to wear helmets although there are a few places where you have to watch your head. It’s also a dry cave so there were few if any damp or slippery spots. It was cool so make sure you wear a jacket.

The outlaw Jesse James and his gang hid out in the cave. He even signed and dated the cave wall but the part of the cave where he signed was closed to visitors. I’m not sure I’d have advertised where I was if the law was after me. According to our guide, his autograph was examined by experts and deemed genuine. By the way, Jesse James was here long after Mark Twain left so their paths didn’t cross. 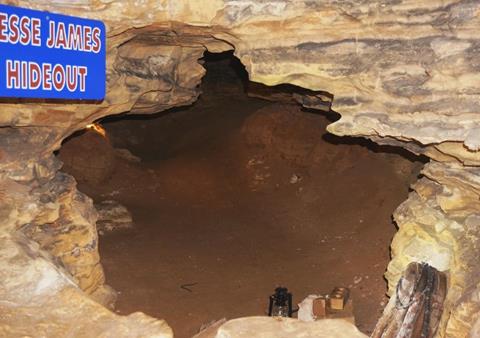 There are a few calcite formations in the cave but very few. It is mostly layers of limestone without stalactites and stagmites that most people think of as being in caves. An interesting note was that Norman Rockwell had originally sketched a typical cave with all sorts of stalactites for his book illustration. But he wasn’t getting a feel for what life was like in Hannibal so to help his creative muse, he travelled to Hannibal, toured the historic houses, toured the cave and realized his planned drawings were wrong. He changed them, including the cave drawing, to reflect what is actually there. His cave sketch with stalactites, his cave sketch with layered rocks and his final drawing are on display in the Mark Twain museum downtown. As you can see, the cave was well lit when we toured. Imagine it with just a candle… and then nothing but darkness when their candle went out. 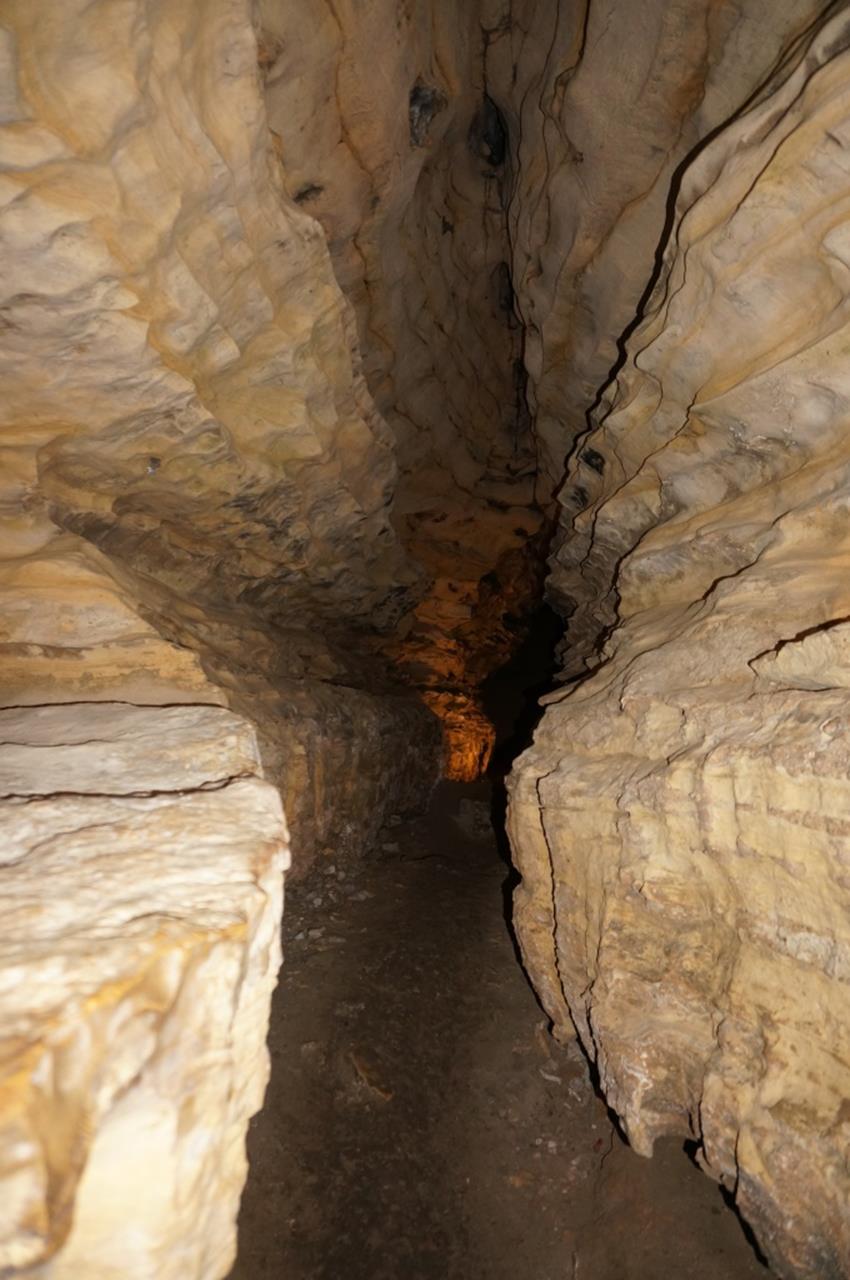 As you tour you can see hundreds, maybe thousands, of “autographs” on the walls of the cave. Some are very old while others are of more recent vintage. At one point, visitors were encouraged to sign the cave, until it became illegal to do so. 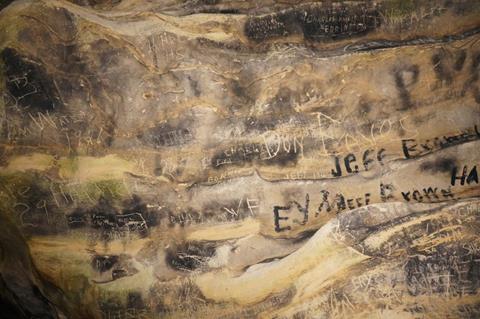 Many visitors drop coins, and the occasional dollar bill, in several “wishing wells.” There were two young boys, modern day Tom Sawyer and Huck Finn maybe, in our tour group and we offered to help them down into the “well” and collect the money. We were only joking, of course. Trust me. Even if we could have found a rope to tie to them, we wouldn’t have done it… probably. The maintenance crew periodically goes down and collects the money. It is put toward the annual Tom and Becky event in Hannibal. Each year two 7th graders are chosen to portray Tom and Becky. They travel around as Hannibal ambassadors promoting the town and appear at events in town. 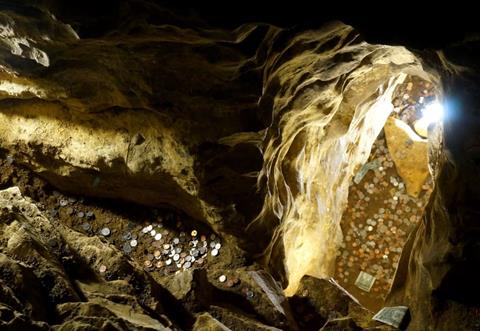 There were a few interesting cave features that had been worn by being touched by countless people. One was called the Alligator Rock although the picture I took looks more like a snake than a gator. 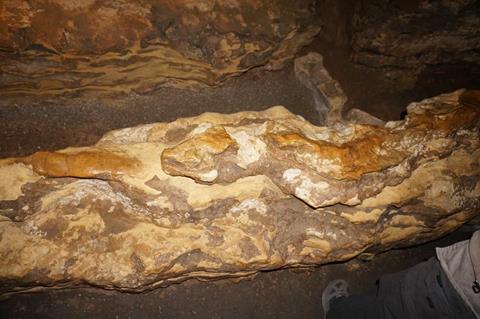 One visitor drew a picture of Mark Twain on the cave wall. It’s a good likeness but you’d go to jail if you did that today. 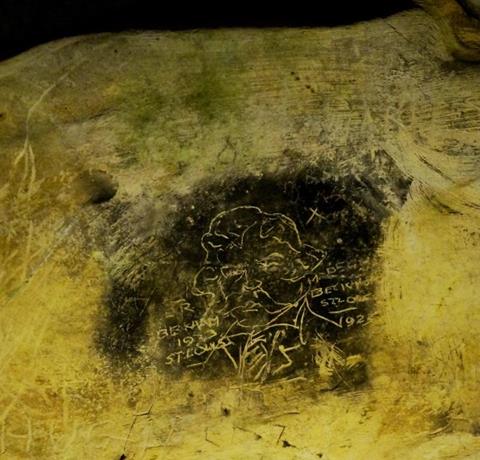 The tour was an hour long and our guide filled the time between cave features by tossing out pretty much every rock joke she could. Real groaners.

Still, I think the tour “rocked.”

J (With input from H who apparently enjoyed the cave more than John did. I would love to go through it with a candle.)

This entry was posted in History, Nature Notes and tagged Missouri. Bookmark the permalink.